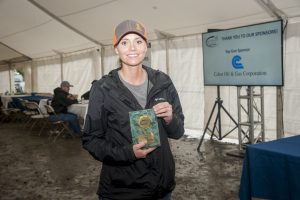 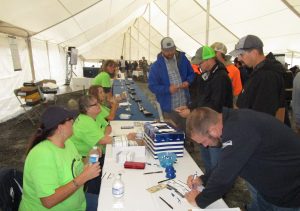 The Lackawanna College School of Petroleum & Natural Gas of Tunkhannock hosted its annual Sporting Clay Tournament on Sept. 23. The threat of rain and some steady downpours did not deter the commitment of nearly 120 participants as they moved through the stations of one of two courses at Hausmann’s Hidden Hollow near Friendsville. Proceeds from the event help Lackawanna College keep down costs for students bound for the gas fields.

LC vice president for college advancement Brian Costanza welcomed the crowd and pointed out the students clad in florescent green shirts who were staffing tables, assisting with parking, and shuttling the gunmen and women around the property. “They are the future of your industry, and they are the reason you are here,” he remarked.

“This is the program that feeds your industry,” added LC president Jill Murray. Indeed, many of the companies represented at the tournament, including Top Gun sponsors Cabot Oil & Gas, Southwestern Energy (SWN) and Williams Companies, have hired students directly from the school over the past decade.

“It’s really exciting to see how many LC students are working in the industry,” said Bill desRosiers (below) of Cabot, who gave a safety talk prior to the participants heading out into the woods. 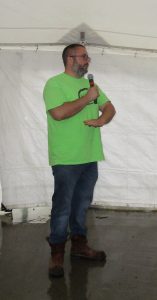 This year has seen the highest percentage of women enrolled in petroleum and natural gas studies at Lackawanna College, a number that has grown steadily over the past decade. 2020 graduate Crystal Bingham, who finished the tournament with the highest score among other female shooters, saw the school as the fastest way to acquire the technical knowledge that she would need to work in the gas industry. After an internship with Cabot, she landed a job as a compression technician with Williams.

“The School of PNG treats every student as an equal and not based on gender,” Bingham, who was a recipient of a Clay Shoot scholarship, explained. The College also has programs to help female students network with each other so they never feel that they are alone. Bingham was a member of the school’s Women in Shale Energy Club. “I would encourage other women to look into Lackawanna College because the possibilities are endless after getting a degree,” she stated.

“They are trying to expand the roles of women in the industry,” said first-year student Lauren Lesoine of Scranton, who was looking into going back to school when she learned about the program. “I just thought that it was something that I would enjoy.”

Lesoine (below, left) admits to being a bit of a Tomboy growing up, and she has no reservations about working in an industry that employs more men than women. She was volunteering at the clay shoot with fellow freshman Drew Wortman, talking with a variety of gas workers as they signed waivers for the tournament, and is looking forward to her internship with one of the companies. 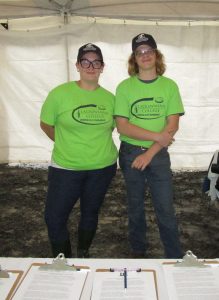 Drew Wortman (above, right) recently moved to Springville in Susquehanna County. An active drilling rig across the road from his home piqued his curiosity. “I started looking online and saw the expansion of the industry, the turnover in employees, and the need for more young people in the industry,” he remarked. Wortman was impressed by the obvious camaraderie among the gas workers who were getting ready to head out on the shooting range.

“It continues to bring together the industry to support the students and highlights the tremendous success of the school,” desRosiers remarked. “Many company representatives in the crowd raised their hands when asked how many companies have PNG students among their workforce.”

“Returning to the shoot felt great,” said Bingham, who had volunteered at the event twice as a student of the school. “I liked seeing some of the instructors that I had and talking to the current students about how the school will help lead them into careers.”

After a catered lunch enjoyed by volunteers and contestants, the winners were announced. On Course #1, Scott & Longacre Trucking took first place and Cactus Wellhead took second. Kyle Falkenberg from the Scott & Longacre team was the top male shooter. 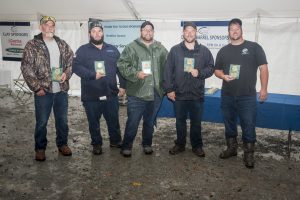 Kozlowski Oilfield Services were the top team on Course #2, with Integrity Slickline Services (above) garnering the second-place plaque. Leanne Robbins from Workover Solutions (WOS) took top honors among female shooters on that course, and Ed Kozlowski, Sr. was the top male shooter.

Many other clay shoot participants won new firearms donated by sponsoring companies. Lackawanna College administrators were more than satisfied with the outcome of the event.

“Despite the weather, we had such a great turnout for the tournament,” said School of PNG program director Sue Gumble. “We are lucky to have such great energy partners, and the money raised from this event enables us to continue providing exceptional education, which helps individuals obtain quality jobs in the petroleum and natural gas industry.”

To learn more about the PNG program offered by Lackawanna College at the Tunkhannock Center, interested readers can log on to www.lackawanna.edu/degree/the-school-of-petroleum-natural-gas/. 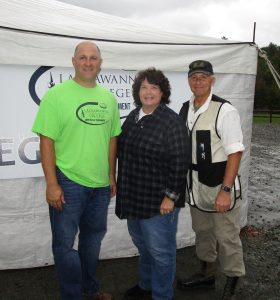 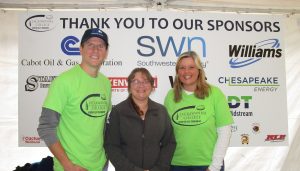 Registration for the clay shoot tournament was conducted by Dan Nowakowski (left) and Megan Mould (right) of Lackawanna College and Bonnie Morris from Cabot. 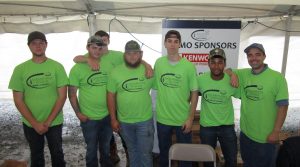 School of Petroleum & Natural Gas students volunteered for many aspects of the event, including handing out ammunition to the contestants. 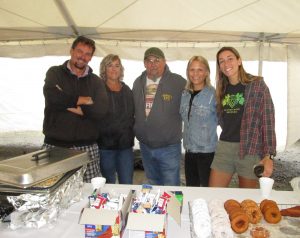 The crew from Greenley’s Barbecue of Tunkhannock kept contestants and volunteers fed for both breakfast and lunch. 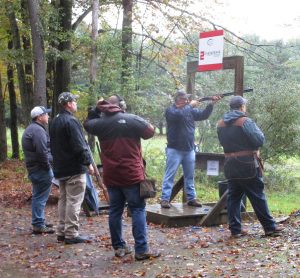