In: Lisa Baker
With: 0 Comments 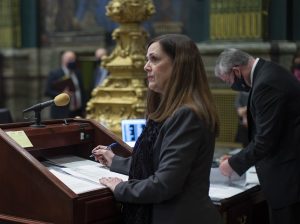 The Senate Judiciary Committee, chaired by Senator Lisa Baker (R-20), held its first meeting of the 2021-2022 legislative session today. Seven bills were unanimously passed with bi-partisan support, including a proposal to amend the Pennsylvania Constitution and reform the Statute of Limitations in child sexual abuse cases, legislation to enhance penalties for child pornography, and Kayden’s Law, which is designed to enhance the safety of children who are the subject of custody disputes.

Senate Bill 87, introduced by the late Senator Dave Arnold (R-48) and Senator Baker, enhances the penalties for child pornography, while also establishing the Task Force on Child Pornography.  A similar version of this bill was unanimously passed by the Senate in October, but was unable to reach the finish line before the end of the legislative session.

“With the recent passing of Senator Arnold after his courageous battle with cancer, I wanted this bill to receive swift consideration,” Baker said. “I am hopeful that we can continue to work to further his legacy of fighting for his community, his constituents, and our children.”

Honoring a commitment she made last year, Senator Baker also prioritized Senate Bill 8 to amend the Pennsylvania Constitution by creating a 2-year window for victims of sexual abuse to bring civil claims against their abusers.  In October 2019, the committee held an extensive public hearing to air this issue and attempt to find consensus on a legally viable and equitable resolution. Baker’s conclusion, as well as that of many of the experts testifying, was that an amendment to the state Constitution would be required.  To be effective, a proposed constitutional amendment must be passed by both the Senate and the House in consecutive sessions, and then approved by the voters.  The measure was already approved by both Chambers once.  If passed this session, the proposal would appear on the ballot for consideration.

“As supporters and opponents alike realize, if we do not act on a measure identical to the one approved last session, it sets the clock back at least two years,” Baker said. “Victims bitterly disappointed over previous failures to achieve justice would see their hopes delayed once more. By giving second round approval, we submit this crucial question to the court of voter decision allowing the public to render a powerful judgement on right and wrong.”

Senate Bill 78, sponsored by Senator Steve Santarserio (D-10) and Senator Baker, establishes a procedure for handling custody proceedings that helps to ensure better protection of our children. It is named in memory of 7-year-old Kayden Mancuso, who was murdered at the hands of her biological father in the summer of 2018, during a court-ordered visit. This was despite factors in the father’s past that, if properly considered, might have led to safeguards that could have helped to protect Kayden.

Senate Bill 81 sponsored by Senator Wayne Langerholc (R-35), amends the Judicial Code by expanding the list of sexual offenses in which an expert can testify in cases of domestic violence and human trafficking.

“These types of expert witnesses have been crucial to helping jurors understand the tremendous trauma that a sexual assault can have on a victim and how that trauma can affect their behaviors and their overall health,” Baker stated.

“The first assistant district attorney is the logical choice to fill such a vacancy,” Baker explained. “They know the cases, the community, the staff, and the office culture. These bills will prevent the possibility of inserting a potentially political decision into the process. These three bills will provide greater transparency and consistency for class 2 through class 8 counties, including those under home rule charters.”

The bills now advance to the full Senate for consideration.