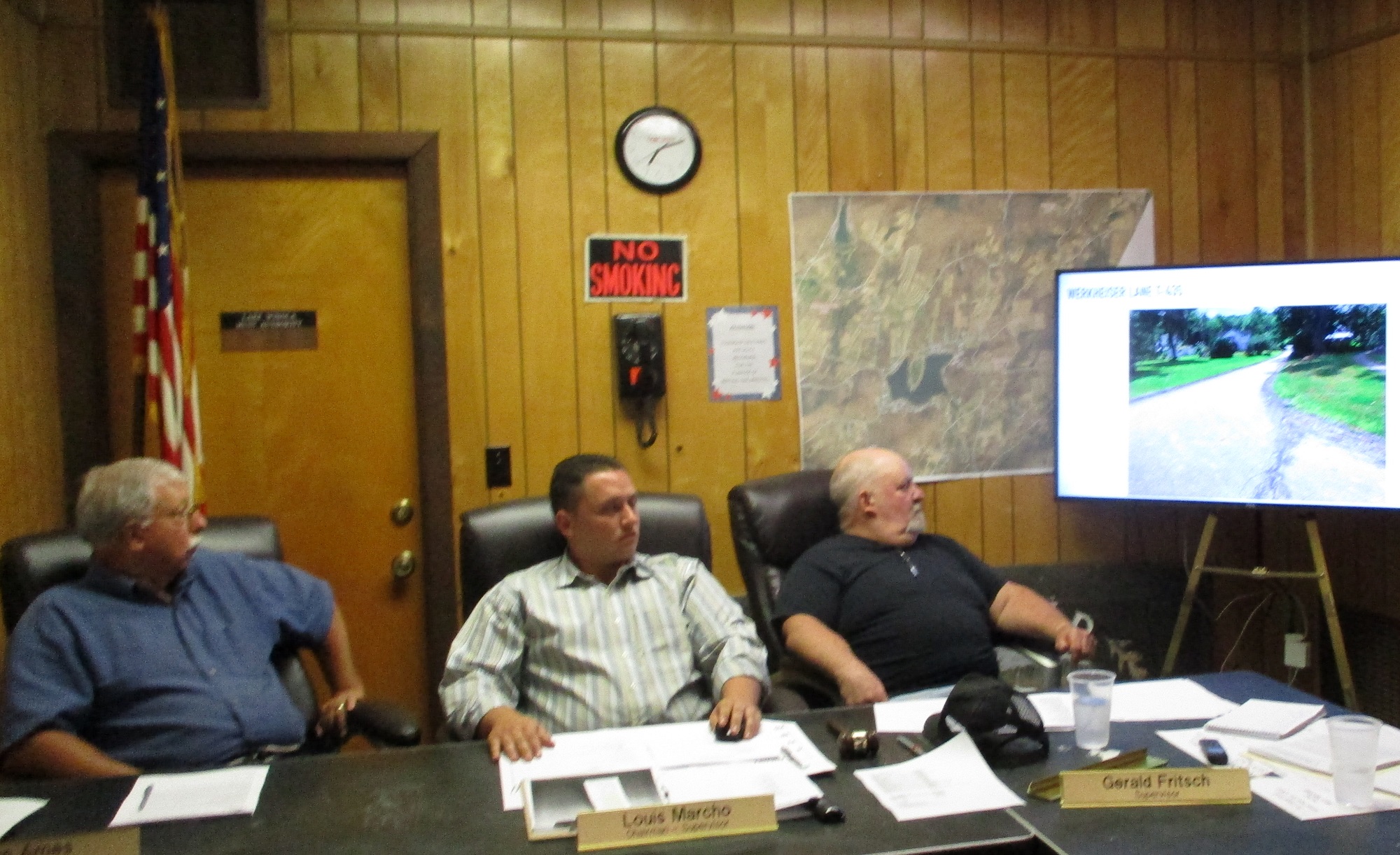 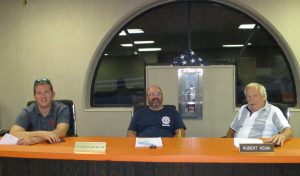 In subsequent, though unrelated meetings, supervisors in neighboring Falls and Overfield townships in eastern Wyoming County discussed options for upgrading, restoring and maintaining their roads this week. Residents in attendance at the meetings held on Monday and Tuesday evenings also weighed in with their concerns and questions.

At both meetings, audience members suggested that whatever funds are available be “spread out” and used to enhance as many roads as possible. Likewise, supervisors in both municipalities responded that, with limited funds for road work and the cost per quarter mile so high, it is necessary to designate specific roads for improvement and let some go.

In neither municipality are there current plans to increase the number of paved roads, much to the dismay of Falls Township residents who live along Ledge Hill and Overlook Drives.

Mike, Gail and Drew Franko were in attendance on Aug. 12 to discuss the issue of dust and to deliver a petition signed by 22 residents they say represent between 80 and 90 percent of the adult population there. While they conceded that paving the roads might be too expensive for the township, they requested tar-and-chipping as a first option and, secondly, spreading oil to reduce the dust level.

“Single coat won’t last,” said Falls Township supervisor Robert Kenia in reference to the tar-and-chip process. “Winter breaks it up.” As far as paving goes, Kenia added, some sections of the roads for which the Frankos are seeking improvements do not meet the criteria of being 18-feet wide.

Mike Franko questioned the decision each year to repave the same roads rather than get some blacktop down on some additional thoroughfares. “Pick a section and do what you can do. You haven’t done all of Spring Hill Drive,” Mike suggested. “At least then you’re making progress and not doing the same roads over and over again.”

Mike noted also that he is not fond of the application of calcium to dirt roads, which is a standard practice in rural communities. The particulate salt just becomes part of the dust during dry weather, he remarked, and the mud it produces after rains is corrosive to vehicles and farm equipment.

“Do you have a three- or five-year plan?” Gail Franko asked. “What are your intentions?”

“This year, we have to finish Wood Drive,” said supervisor Gene Dziak, Jr., noting that work there is in the fourth year of a three-year plan that was sidelined by last year’s floods.

Citing Dziak’s estimate of $50,000 per half-mile of new pavement, the Frankos asked if the supervisors could produce estimates for putting down tar-and-chip or spreading oil on the same length of roadway. Supervisor Levi Bonnice said that he would ask the township’s representative at Suit-Kote for those figures for the next meeting. Dziak and Kenia also agreed to take a serious look at getting Overlook Drive into the paving budget for 2020.

In Overlook Township, supervisor Gerald Fritsch reported that calcium had been applied to seven and a half miles of dirt roads, and the remainder would be dressed in the coming weeks. Subsequently, oil will be applied to the same roads as soon as it becomes available. Maple and Ross roads need some attention before school buses start running again, he added.

To best portray the condition of paved roads, Overfield Township supervisor Louis Marcho presented a slide show with photos of all blacktopped roads within the municipality that clearly showed their respective conditions.

“I think we need to look at them all, assess them, and decide what we need to do,” he stated. “We might as well see what they all cost.” Spiderweb like cracks, berm erosion, and potholes were evident throughout the township, and the supervisors interjected other issues and concerns.

“There’s supposed to be sluice pipes under that road,” Fritsch noted of Pete Hill Road for example, “but they’re all plugged up.” Supervisor Don Ames added that the township is facing a $26,000 engineering cost just to have the problem looked at.

Point Road has been plagued by ongoing runoff and washout problems, Ames related, as a number of photos of the road indicated. Meeting attendee John Walsh asked why residents there were allowed to park with the rear ends of their vehicles in the roadway of Point Road. “How do two cars pass there?” he asked.

“They don’t,” Ames and another audience member replied simultaneously.

No budget numbers for road fixes in Overfield Township were brought up, but the general consensus was that every road could not be addressed, and that the township could use some monetary assistance. Ames suggested that it might be time to seek funding through State Rep. Karen Boback. “Overfield Township has never approached the state for a contribution. She told me that,” Ames remarked.

In Falls Township, a discussion on which roads to address next was bound over to an executive session that was held at the end of the meeting. Upon reconvening the public meeting, the supervisors unanimously approved the completion of Wood Drive at a cost of $41,000 to $45,000 and the township building parking lot at a cost of $13,000. The funds will come from the Act 13 account, and the work will be done by Black & Green Landscaping of Tunkhannock.