The Eaton Township supervisors met with the Wyoming County commissioners on Tuesday to finalize a deal between the two entities for the reopening Roadside Rest Park. The once popular family destination was closed two years ago due to an influx of people using drugs and otherwise disregarding the intended use for the public greenspace. It was previously monitored by PennDOT and local police as needed, but neither wanted the long term responsibility.

The commissioners reported at their March 16 meeting that they were close to sealing a deal that would allow for Eaton Township to rent the park and run it for a year. It was determined that public interest, as well as commitments from volunteers and area businesses, were adequate to get the gates open again so that residents could enjoy the site along Route 29 and Bowmans Creek.

“I think we can run it with volunteers at almost no cost, along with donations,” Eaton Township supervisor Paul Rowker stated.

The remaining questions on March 30 had mostly to do with insurance. It was agreed that the insurance policy held by the county, which will retain ownership of the park for the time being, would provide liability coverage. What had yet to be determined was whose insurance would cover the many volunteers, including individuals on probation and members of the Drug Treatment Court who need to perform public service, that will be needed to maintain the functions of the park.

Commissioner Tom Henry wanted to be sure that volunteers steered to Eaton Township via county programs would still be covered. While Litwin seemed confident that they would be, he expressed concern that the county’s insurance policy does not have a similar rider.

Though rather irrelevant to the topic at hand, Henry and Litwin went back and forth a few times with Henry suggesting that the county’s insurance policy must cover volunteers because he had personally transported them to job sites over the years. Litwin insisted that he had looked into it, and the current policy does not cover volunteers. The cost for the add-on is $365 to start, plus an additional amount for each volunteer, he related.

“I’m a little concerned if the county has other volunteers that we should have covered,” Litwin stated. “We should have that conversation with the insurance company, regardless of what happens with the park.”

Litwin also strongly encouraged the supervisors to pay a professional to remove several dead ash trees in the park, rather than rely on a professional tree smith who had volunteered to do the work at no cost.

“Dead ash trees are a liability for sure,” commissioner Rick Wilbur agreed, noting they reports abound of people being harmed during their removal because the trees – victims of the Emerald Ash Borer – splinter and break apart easily.

Another element of liability that had apparently not come up at earlier meetings was how to get youths, including scouts and children of adult volunteers, involved with the project and kept safe. Henry and Wilbur were unsure that any extra measures would be needed, but Litwin was adamant that the topic be properly addressed.

“We need to be sure that we have policies in place to protect the kids. It’s pretty complicated to supervise children. Parents have to sign waivers,” said Litwin, adding that those under 18 could not be paired with non-parental adults without proper clearance.

The commissioners asked if the township has a specific form for volunteers to register. In the past, Rowker explained, volunteers have registered together by signing their names to a group waiver. A more detailed process might be necessary with the new endeavor, Litwin suggested.

Next came the timeline of the pact, which had initially been set at one year from the date of agreement. Owing to potential changes to the composition of municipal boards like the commissioners and supervisors, Wilbur suggested that the term be extended. “I’d like to make it until the next election – rather than just a year – as long as the board is the same up to the next election,” he stated.

The others on the panel had no problem with the suggestion nor Rowker’s contingency that, “If it doesn’t work out for either of us, we can shut it down.”

Once the insurance wrangling is done and Eaton Township’s proposal is approved by both parties, the township will pay one dollar to rent the park and begin structuring a maintenance plan. A local business owner has offered to donate a zero-turn mower, but Rowker was not sure yet who would actually own it. In the meantime, he said that he would take responsibility for mowing the park.

The township will establish the rules and regulations for the park, one of which Rowker said will be that the venue is accessible to the public only from dawn to dusk. He also wants new signage installed prior to opening, including prohibitions against swimming.

With Rowker saying, “I feel good about it,” and Wilbur remarking, “We’re getting close,” the panel rounded a corner and started to look to the future with help from county planner Lynnelle Farber, who has a landscape architect degree. 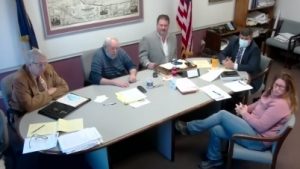 “The commissioners have asked me, in the long run in, what we will do,” said Farber (above right), noting that she and commissioner Ernie King have been looking into grants. “With so many different entities, especially on this project, I thought it was important to put together a master plan.”

Not only does any application for recreational and greenspace funding score much higher if the entity has a strong master plan, she explained, the document serves as a long-term road map if board members change and need a solid reference of what has been completed and what still remains to be done.

In many similar instances, the first grant request from a municipality is to secure funds to hire a consultant to devise the master plan. “I have the ability to take the state’s master plan of development and do it here in house,” Farber related. The extension of her services by the county will save the township money and time, though she cautioned that any significant funding might still be a year or two away as most agencies have already passed their deadlines for receiving grant applications for 2021.

Though Wilbur suggested that there might still be an opportunity to acquire a mini-grant from the Endless Mountains Heritage Region this year for the addition of a few new picnic tables, he conceded that there will probably be no big improvements until 2022. “It will be an open, wild kind of space,” Wilbur stated, suggesting that grants could eventually assist in the addition of walking trails and other elements. “We could continue to make it better for people.”

Farber committed to forming a steering committee that would work to develop a master plan by the end of this year.

The Eaton Township supervisors will discuss their final proposal at a public meeting at the Township building on Route 29 at 7 pm on Tuesday, April 6. “I would love for the public to participate in the meeting,” supervisor Kukuchka told Endless Mountains Lifestyles, noting that in-person attendance is permitted under COVID guidelines.

There is no set opening day for the park at this time, but it will be accessible to trout fishers as of Saturday, April 3.