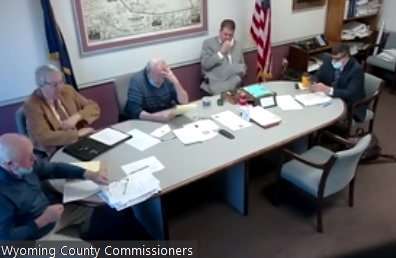 The number of people involved with and attending a jury trial at the Wyoming County Courthouse on Monday broke with current COVID-related protocol and left some courthouse employees uncomfortable and questioning its enforcement.

“There was a trial yesterday, and I came in to seven people milling around the lobby,” commissioner Rick Wilbur related. “They were wearing masks, but that made me a little nervous.”

Dennis Montross, Patti Mead and Cindy Zika Adams from the Recorder and Deeds, Treasurer, and Prothonotary offices, respectively, visited the commissioners during their public meeting on Tuesday to voice general concerns, but it was the hubbub surrounding the jury trial that incited Wilbur. A new surge in COVID cases in the county further influenced their discussion.

While commissioner Tom Henry agreed that the crowd wasn’t managed properly, there was disagreement as to whether or not the board of commissioners has ultimate control at enforcing their own rules.

“We have no control over him holding trials,” Wilbur suggested. “I feel that we need to tell him that, under the circumstances, we would prefer that he not do it.”

“I think it’s real important that we enforce the safety aspects,” Henry stated. “And the judge cannot have people roaming around the halls. That’s our call.”

Visitation to the courthouse has officially been by appointment only since late last year, after a fall spike in COVID cases prompted the commissioners to return to the near-lockdown mode they had enacted early last summer when government entities started to reopen.

Wilbur acknowledged that, for many citizens, the courthouse was once a place for both business and a certain amount of socialization. It was not uncommon, prior to the pandemic, for people to go to the courthouse to pay a bill or get a dog license, for example, before roaming the halls and riding the elevator to visit other public officials, including the commissioners.

“That’s part of our job, I understand that,” Wilbur said of the responsibility of the commissioners to be accessible to the public. “If someone has business to do that has to be done face-to-face, we have to accommodate them. But we need to stick to our guns and keep it appointment only. Or go outside and talk to them with masks on. I know it’s inconvenient.”

“Everyone seems to think that they should stop in our office,” Zika Adams told the commissioners. “There’s no door or window to our office, so people just walk in.”

In an interview shortly after the meeting, Adams told Endless Mountains Lifestyles that she and her staff very much miss dealing with the public on a more personal basis, but the recent spike in COVID cases in the county worries them.

Adams was clear that her comments had little to do with the jury trials but more with the fact that people do tend to wander once they gain access to the courthouse. The door to the prothonotary office is open, she explained, because she wants the public to know that her department is still conducting business, including issuing passports and marriage licenses. But most of the work is done on the phone or online, and actual meetings have largely occurred outside the building or even after hours. “It has actually been working very well,” she remarked. “But of course we miss seeing the people.”

Commissioner Henry brought up the idea of “hall passes” that someone entering the building by appointment would carry to confirm where they are supposed to be. If their locale does not match what is on the pass, they would be politely escorted from the building. The idea was well-received by those in the room.

Wilbur wrapped up the conversation with a commitment to speak with all department heads, security officers and the judge by the end of the day to get everyone back on the same page. “I’m hoping for less jury trials until numbers come back down,” he stated.

In a brief meeting of the Wyoming County Prison Board held prior to the March 30 commissioners meeting, Warden Ken Repsher and the board members agreed that the jail in Tunkhannock will remained closed to visitors until Repsher receives guidance from the state suggesting otherwise.

During the conversation about courthouse safety, Henry noted that more than 4,000 county residents, mostly frontline workers and the elderly, had been fully vaccinated and more than 2,000 have had one shot.

Later in the meeting, Wilbur mentioned a letter signed by the commissioners on March 25 expressing to Gov. Tom Wolf, PEMA and the Pennsylvania Department of Health (DOH) their frustrations about current plans to conduct larger, regional vaccination clinics, rather than the county-by-county vaccination events for which the commissioners had earlier been told to prepare. Wyoming is among eight counties to have sent letters to the DOH since their plans were discussed during a meeting coordinated last week by Sen. Lisa Baker and Rep. Karen Boback.

(Read about it here: http://www.endlessmtnlifestyles.com/wyoming-county-commissioners-challenge-regional-vaccine-clinics/)

“People in Wyoming and other rural counties are having trouble getting vaccinated,” Wilbur stated. “Even if they still decide to go regional, it must include local vaccination sites to ensure that our elderly don’t have to travel long distances.” Another matter of contention is the DOH’s plan to invite people in group 1B to the regional clinics. “We have people in group 1A that cannot get vaccinations yet,” Wilbur remarked.

In the meantime, the commissioners are urging senior citizens to register with the Area Agency of Aging for Luzerne & Wyoming Counties at 570-822-1158 to get into the agency’s database before vaccines are available. Those with adequate internet access can register at www.health.pa.gov by clicking on Where Can I Get Vaccinated.

More COVID relief is coming down the pike to assist the hospitality industry, which has been particularly hard hit during the pandemic. CHIRP (COVID Hospitality Industry Recovery Program) is being administered by the Northern Tier Regional Planning & Development Commission, offering grants between $5,000 and $25,000 to qualified applicants. The Restaurant Revitalization Fund Grant will be administered by the federal Small Business Association. Details have yet to be ironed out on the latter, but applicants must register ASAP for both DUNs and SAMs numbers. The SAMs application takes longer to process, Wilbur noted, so applicants should log onto www.wycopa.org now to get the applications underway.

There is still a large sum of money available to help landlords and renters with back rent and utility bills through the Rent & Utilities Assistance Program. Despite county human resources director Mike Donahue reaching out to landlords and mobile home park owners throughout the county, only 20 applications have been filed so far through www.compass.state.pa.us.

In other business, it was noted that commissioner Henry, who has long served on the board of Mental Health & Disabilities Services of Luzerne and Wyoming counties, will be sworn in as its new chairman.

April 2021 was designated by the commissioners as both PA 811 Safe Digging Month and Child Abuse Prevention Awareness Month. To mark the latter, Janine Fortney, director of the Children’s Advocacy Center of Susquehanna & Wyoming Counties, and other staff members will set up a display of pinwheels on the courthouse lawn next week to draw attention to the cause. The Soldiers and Sailors monument will be lit with purple lights.

The commissioners proclaimed April 6 as Teal Tuesday to show support for survivors of sexual violence. County residents are encouraged to “turn the town teal” by wearing teal that day, taking a photo and posting it at www.vrcnepa.org and repeating those steps with a friend.

Jessica Coolbaugh’s employment with the Public Defender’s office and the County Planning office was confirmed. The commissioners had decided that another full-time employee was not needed in the planning office and that it made more sense for duties previously performed by the former public defender at his office to be conducted inside the courthouse. “We decided to combine the two positions into one job,” Wilbur explained. “This will save us a considerable amount of money.”

The resignation of Dylan Flexer from the Probation Department, effective April 2, was reluctantly accepted by the commissioners. “He’s always done a great job for the county, and we hate to see him go,” Wilbur said of Flexer.

A bid of $2,042 from Grasshopper Lawn, Inc of Larksville was accepted for the restoration of the courthouse lawn. The contract will include aeration and overseeding, an application of lime, and four subsequent applications of fertilizer through the remainder of the year. The bid beat out a $7,450 offer from Shupps Seals that would have involved removing and replacing existing topsoil, which the commissioners did not feel was necessary.

The twice-annual Electronics Recycling Program conducted by the county will take place on Saturday, May 15, but county residents will need to preregister by Thursday, April 15 to participate due to COVID guidelines.

“For people who are nervous, you never have to get out of your car,” Henry said of the process. “You just pull up and they take it.”

“Our employees will be masked,” Wilbur added. “DEP is requiring that we register people ahead of time.”

The electronics recycling program will be offered again in the fall.