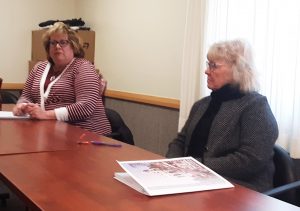 A map created by DavesRedsistricting.org (top) and supplied by Rep. Tina Pickett’s office shows how the 68th, 110th, and 111th districts for the Pennsylvania House of Representatives have been redrawn to reflect a supposed significant decrease in rural population. Pickett (above, right, with Endless Mountains Visitors Bureau director Jean Ruhf) visited Wyoming County on Feb. 15 to meet a number of business leaders and elected officials with whom she will be working more closely.

Just a little more than a week after the PA Legislation Reapportionment Commission approved a final version of redistricting maps that significantly alter representation in many rural parts of the state, Rep. Tina Pickett visited Wyoming County on Feb. 15. Though there are still options for appeal, Pickett said that she and her colleagues have come to a general acceptance of what she termed “major changes” and feels that it is time to move forward.

Nonetheless, she feels that the new maps are flawed and based on an inaccurate census, conducted during the height of the pandemic, that Commission members insist shows a marked decrease in population in rural areas. “I don’t feel the loss of thousands of residents,” she stated. “I just don’t.”

Picket’s 110th congressional district previously included Sullivan County, a large part of Bradford County, and the west side of Susquehanna County. The most recent map now has Pickett representing all of Wyoming County and a smaller portion of Bradford County. She will no longer represent Sullivan County, which has been paired with parts of Lycoming County and points south, nor any part of Susquehanna County, which is now solely in District 111 and represented by Jonathan Fritz. The 68th district, represented by Clint Owlett, expanded further into Bradford County.

Pickett is no stranger to Wyoming County, however. She was the cofounder of the popular Fireplace Restaurant west of Tunkhannock, which opened 55 years ago. She recalls that, at that time, local civic clubs had no female members. Pickett helped to found the Endless Mountains Visitors Bureau (EMVB),  which includes Wyoming County, with Thomas “Doc” Shoemaker of Sullivan County. She is now in her 11th two-year term as a state representative.

“While I have an earlier business background in Wyoming County, many of the owners, locations and residents have changed,” Pickett told Endless Mountains Lifestyles. “It was a very informative day for me and an opportunity to take what I viewed as a ‘listening tour day’ of Wyoming County.”

Among her stops on Tuesday were the Lackawanna College School of Petroleum and Natural Gas in Tunkhannock and the offices of the Wyoming County Chamber of Commerce. Chamber president Gina Suydam coordinated the itinerary that brought Pickett back to the Chamber board room for a roundtable discussion with Jean Ruhf of the Endless Mountains Visitors Bureau, Erica Rogler of the Wyoming County Cultural Center, Wyoming County commissioners Ernie King and Tom Henry, and county sheriff Bob Roberts.

“The day was very well organized to allow me to meet with different constituencies,” Pickett remarked. “The Lackawanna College PNG school was very impressive – a school preparing students to enter into a good sustaining job in an industry that is not only important to our region, but can take them to many job choices nationally.” 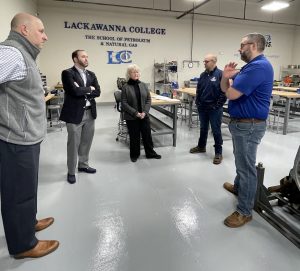 “We appreciate all the interest and support we are getting from our local elected officials and their willingness to help us in any way we can to get the word out there about the PNG program and the value of educating our future work force,” said Sue Gumble, program director and instructor at the Lackawanna College Tunkhannock Center.

At the Chamber offices, roundtable participants took turns sharing their respective concerns with Pickett and offering some suggestions as to how she might help Wyoming County on a number of different levels.

Ruhf, for example, spoke of the state’s continued lack of sufficient support for tourism. At one time, Pennsylvania ranked fourth in the nation in terms of money spent on tourism, a number that has slid into the 40s. Over the same time period, the staff of the Pennsylvania Tourism Office has been reduced from 14 to 3.

“Tourism is economical development. It’s an investment,” Ruhf maintained, citing statistics that every dollar invested in tourism comes back to the state fourfold. “You are making money off that money.”

Pickett acknowledged Ruhf’s concern and added that she feels that the state as a whole is lacking a cohesive branding mechanism. She laments that the well-known phrase “You’ve Got a Friend in Pennsylvania” was abandoned for new slogans that are uninspiring.

Rogler related to Pickett that, while current patronage of the Wyoming County Cultural Center and Dietrich Theater is less than 70 percent of its pre-pandemic level, the organization continues to succeed with public and business support and a diversity of offerings. Rogler thanked Pickett for her ongoing support of the Pennsylvania Council on the Arts. Partnerships with that and many other regional and local organizations have helped the Cultural Center retain its vitality in the county.

Commissioner King told Pickett that, while the Wyoming County is on solid footing financially, there are blight issues that can’t be adequately addressed under current legislation. “The municipalities are not as strong in rural counties as the state may believe,” he stated. He suggested that moving some of the current resources back to the county level could provide an enforcement arm – such as a blight control officer – that would benefit all of the boroughs and townships. “Our goal is not to override them,” he maintained, “but to assist them.”

King also sparked a discussion on rural broadband issues, which the commissioners had addressed earlier on Feb. 15 in their regular public meeting. (http://www.endlessmtnlifestyles.com/commissioners-end-mask-mandate-seek-grant-to-boost-broadband/) Though the federal government is proposing distribution to Pennsylvania of about $100-million to address unserved and underserved rural areas, Pickett called the amount a “drop in the bucket,” suggesting that at least $700-million to a billion dollars is needed. She feels that the state should kick another $200-million into that fund. Suydam suggested that any broadband projects first target those with no internet service at all rather than those who don’t feel that their service is up to par.

The state has yet to appoint an authority to oversee the proposed funding, but Pickett said that she has voiced her opinion in Harrisburg that having truly rural representation on the board should be a priority. 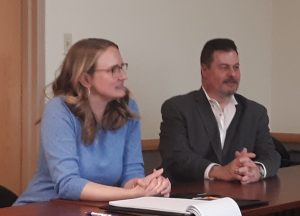 Suydam (above, left) brought to Pickett’s attention several countywide committees that have helped to address issues like substance use disorders, mental health and suicide, and the many challenges created by the pandemic. She cited groups like the HOPE Coalition, Wyoming County Heart & Soul, and the COVID Task Force spearheaded by Rep. Karen Boback.

Each of these varying associations, she noted, has proven effective at paring resources with the businesses, organizations and individuals that need them, a notion echoed by commissioner Henry (above, right). Even with the pandemic seemingly subsiding, Suydam suggested that she would like to see the group currently known as the COVID Task Force continue in some form.

Suydam also remarked that, despite the change in representation, she was happy that the Reapportionment Commission kept Wyoming County intact and looks forward to a long working relationship with Pickett. Pickett’s state senatorial counterpart in Wyoming County will be Sen. Lisa Baker, whose district changed very little on the new maps.

Pickett’s final Wyoming County stop on Feb. 15 was at Moose Lodge for the Wyoming County Republican Committee meeting, before whom she spoke in  the evening. “The committee is a great cross spectrum of citizens of Wyoming County and another opportunity to hear their issues and answer questions from them,” Pickett said afterward. “The entire day, for me, was a very valuable time for me to meet with people from many different involvements in Wyoming County.”