In: Hunting
With: 0 Comments 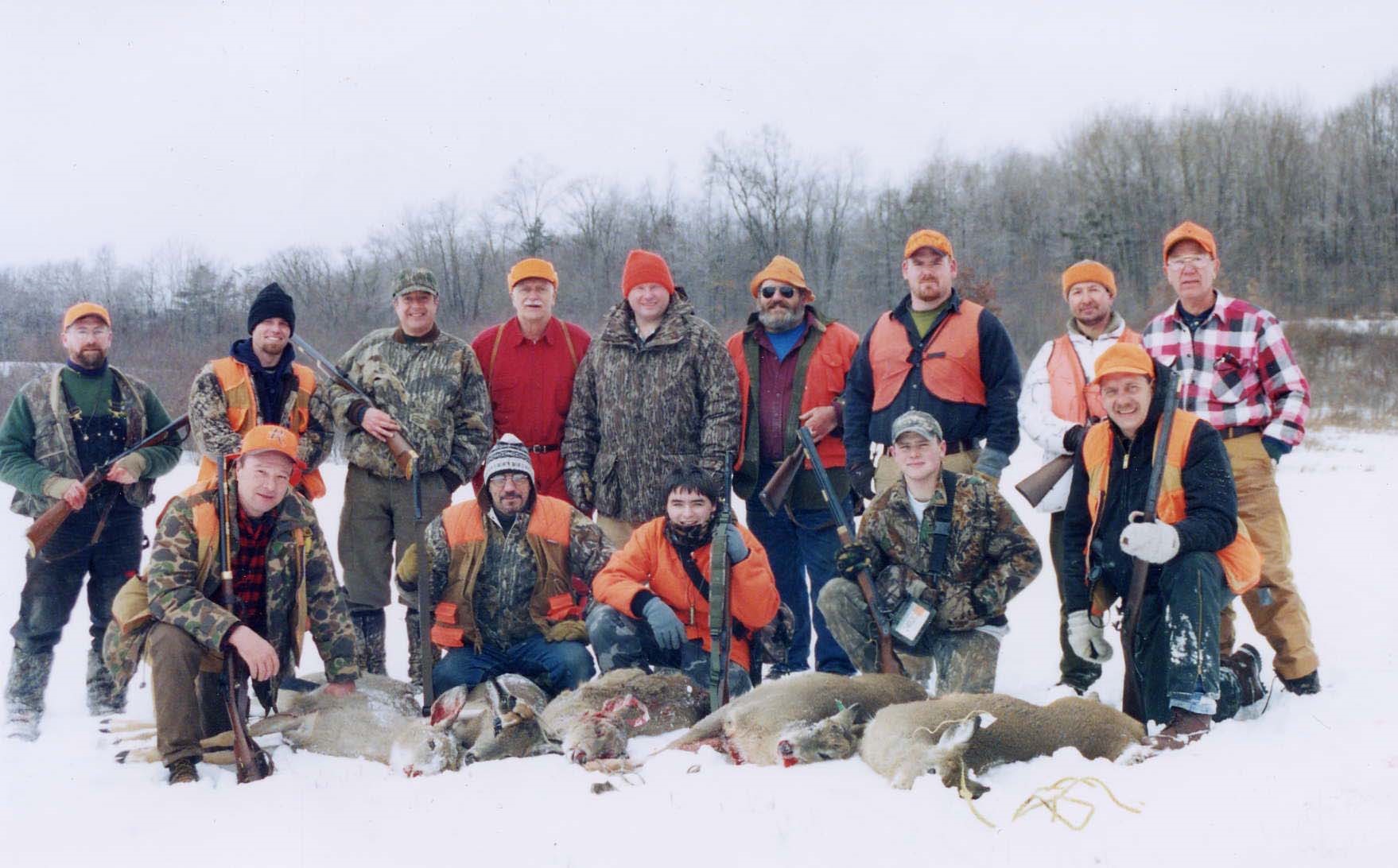 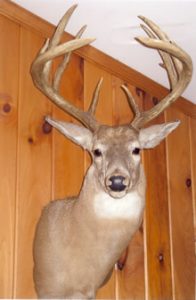 Celebrating the opportunity to hunt together between holidays with muzzleloaders in Asylum Township are (top, kneeling, from left) Paul Kriescher, Kip Crandall, Chris Crandall, Kelly Devine, Steve Evans, (standing) Mark Madden, Mark Sweppenhesier, Jeff Smith, Frank Madden, Rob Sweppenhesier, Frank Crandall, Derk Kriescher, Jim Latini, and Dale Berry. A cherished mount of a trophy buck taken in Athens Township in 1953 (above) by Samuel McKean with a rack score of 153-0, which ranks at No. 20 on the BCTDBC list for typical deer taken with gun.

Big game hunting has a long tradition in Bradford County. Many families can trace their hunting roots back 100 or more years on the same homesteads. Though deforestation by lumber companies and farmers alike took a toll on wildlife in the late 1800s, conservation efforts prevailed and brought back the population of white tailed deer, black bear and other popular species to appreciable levels by the mid 1900s. As Pennsylvania’s status as a mecca for big game hunters grew, however, the number of “trophy” animals diminished.

Between 2002 and 2003, the Pennsylvania Game Commission (PGC) initiated an entirely new approach for controlling the white tailed deer population, including establishing wildlife management units (WMUs) and restricting the harvesting of bucks based on the number of tines on their antlers.

“From a management standpoint, it makes sense. It’s a more natural breeding ecology,” said PGC information and education supervisor Bill Williams. Prior to the antler restrictions and WMU mapping, as many as 80 percent of all bucks were being killed each year. Deer counts of 20 doe per buck were not uncommon, Williams explained, despite the 50/50 buck and doe birth ratio.

“Most people are happy with antler restrictions,” Williams stated, citing some senior hunters among the exceptions. Nonetheless, the changes were controversial at the time, with many hunters fearing that the results would counter the objectives. By allowing young bucks to survive into a second or third year and become part of the breeding culture, Williams noted, the PGC soon saw an uptick in the number of bucks and their rack size.

They weren’t alone in their observations. The Bradford County Trophy Deer and Bear Club (BCTDBC) was formed in 2007 by a group of long-time hunters who embraced the new PGC guidelines.

“Those big ones are a result of the game commission’s role in wildlife conservation when they started the MU restrictions,” BCTDBC founder Roger Kingsley maintains. “All of these things that help develop the bigger bucks are a result of that management.” Kingsley (below) is a third generation hunter in Springfield Township, who is now passing along his passion for big game to his grandchildren. 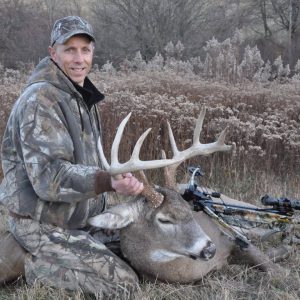 According to its mission statement, the BCTDBC is “dedicated to measuring, keeping records of, and bringing to public attention the outstanding deer and bears taken in Bradford County each year.” The group hosts an annual banquet at which members are invited to display their notable specimens, many of which are logged as “record book” animals, based on the Boone & Crockett scoring system for deer and bears.

“Some people are put off by our efforts, thinking that we are all about trophy hunting, but that is far from the truth,” noted BCTDBC charter member Mark Madden. “There is no shame in any legal target.”

BCTDBC members cherish hunting traditions and feel that their efforts to continue measuring and recording trophy animals is both a service to the hunters and a tribute to the animals. Archers use the Pope & Young system of measurement, and Longhunter Society criteria is used by muzzleloader hunters. BCTDBC also maintains typical and non-typical deer categories for youth hunters.

“We recognize that every hunter may hope to tag a trophy or that ‘buck of a lifetime,’” Mark related. “When they do, we wish to commemorate that experience to recognize the great hunting opportunities and heritage we have here in Bradford County.”

Mark’s father, Frank, took up hunting at a young age under the mentorship of an uncle, hunting in Bradford and Sullivan counties while residing in Schuylkill County. When Frank came across a job posting for a new Masonite plant to be built in Bradford County, he jumped for the chance to apply. “He wanted to come here because of the hunting opportunities,” Mark related. Frank joined the Towanda Beagle Club, through which they expanded their hunting circle.

Mark met Bob Chilson of LeRoy, who became his mentor. “He was a hunting hero to me and very influential,” Mark recalls. “He was the first person I called when I passed my hunter safety course.” Through the PGC’s DMAP program, Mark has been able to provide opportunities for numerous youths to enjoy their first hunting experiences and take their first deer on the 100-plus acres he owns in Asylum Township and manages as a hunting property.

Habitat also plays a large role in the health and population of both deer and bears, as well as their range. As former cow pastures and tilled fields are reverted back to more natural conditions, breeding and feeding grounds for wildlife are expanded. And, while the natural gas industry is often accused of disrupting wildlife, the opposite may be true in the long run.

“If they are operating on game lands,” Williams said of companies associated with gas drilling and export, “they are required to recreate habitat. In many cases, they are creating openings and edge, which is good for deer, turkey and grouse and a number of other species. It is often better off than it was before.”

“We have better quality habitat, better food sources, and better restrictions to grow those bigger antlers,” Roger asserted. “All you have to do is look at our records, and the proof is right there.” For example, three categories have new number 1 rankings since 2015.

Kingsley is one of three certified measurers on whom local hunters rely to get the numbers right. For white tailed deer, scores are a combination of the number of points, tip-to-tip spread, length of main beam, circumferences. The scoring system is based on symmetry, so one beam needs to be a mirror image of the other, he explained, or points are deducted.

Several websites, like www.boone-crockett.org offer free, easy-to-use calculators to get a “green” (or amateur) estimate of a trophy score. Any hunter who feels that his or her estimate is close to or above the minimum scores for a particular breed is encouraged to contact someone like Kingsley, whose services are provided by appointment at no cost.

Bradford County’s no. 1 typical deer scoring, 189-0 taken by Fritz Janowsky in 1943, is also a state record. Recent record book entries include Kyle Jackson’s Springfield Township 173-0 non-Typical taken with a bow in 2016, and a 151-5 typical taken with a gun in South Creek Township in 2017 by Jody Schaef.

Criteria for trophy bears include estimated live weight and skull size, and many Bradford County bears have made it to the national record books in recent years. The three largest black bears are attributed to Jeff Fassett of Ulster (638 lbs in 2011), Kelly Devine of Orwell (617 lbs in 2008), and Chad Reed of Lititz (604 lbs in 1991).

For more information on the BCTDBC and to view lists of Bradford County records, interested readers may log on to www.bcdeerandbear.com. 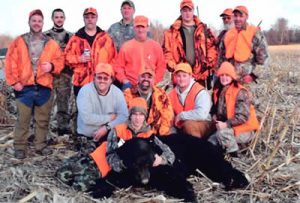 Clifford Crawford, Jr., surrounded by his hunting party, with his 342 lb. Bear taken in Wilmot Township. 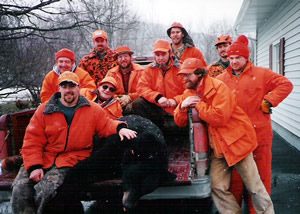 Patrick Kennedy (front, left) with his hunting party and 402 lb. Bear shot in Ridgebury Township in 1997. 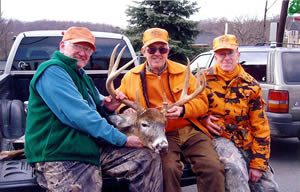 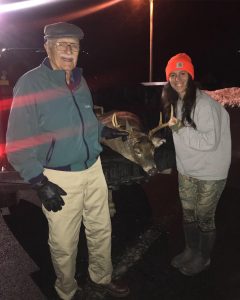 Morgan Madden (right), daughter of Mark Madden, celebrates the taking of her first buck with her grandfather, Frank Madden in 2018. 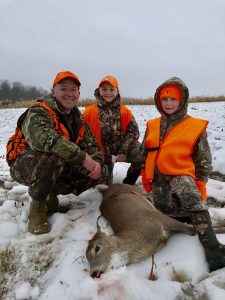 Jessica Alderfer (right) took her first deer in Springfeild Township at the age of 6, mentored by her father, Jason Alderfer (left) and brother Jacob.