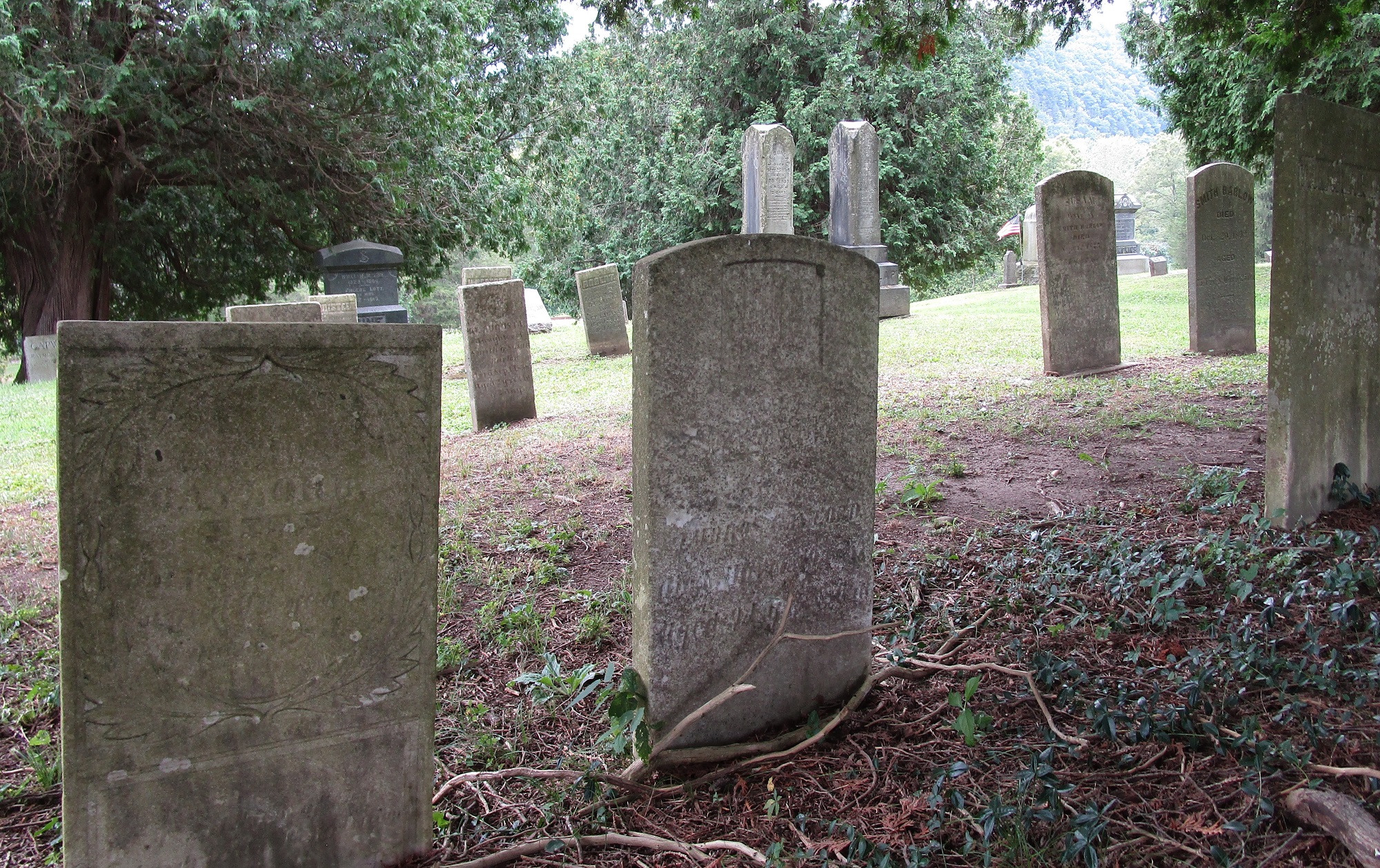 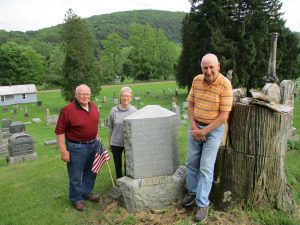 Above the railroad tracks along the Susquehanna River in Meshoppen Township, Wyoming County, a pair of cemeteries is flanked by hay fields along Sherwood Road behind the Wyoming County Fairgrounds. To the west is the Overfield Cemetery, its oldest stones abutting those of St. Joachim’s Cemetery, where burials started more than a century later.

Members of the Overfield Cemetery Board of Trustees have taken upon themselves the task of maintaining this historic graveyard, whose inhabitants represent not only the beginning of the communities that flourished in western Wyoming County over the past two centuries but also the immigration of some of the first colonists to the area.

“We want to leave it in good shape so that a younger generation wants to take it over,” said board chairman Ben Cole, whose Cole and Loomis ancestors fill many plots. The land on which the Overfield Cemetery sits, Cole noted, was purchased near the beginning of the 18th century from the Overfield, Fassett and VanGorden families, and many other families with roots in the area have connections to its 800-plus known plots.

Revolutionary War veteran Capt. Prince Alden, great-grandson of famous Pilgrims John and Priscilla Alden, was interred there in 1804, as was his wife, Mary. The Aldens were true patriots, and many of them joined the military to aid the burgeoning nation in whatever new conflicts she faced. They are in good company among many veterans for whom the Overfield Cemetery is a final resting place. 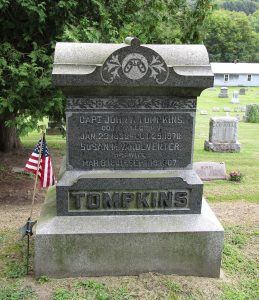 Captain John A. Tompkins descended from a long line of men with the same or similar names, starting in England, then Plymouth and Connecticut before their arrival in what would eventually become Pennsylvania. His ancestors were also loyal to the colonies, even at a time in New England when the family’s neighbors were fleeing to Canada to avoid conflict. John A., born in 1838, was enlisted in the 107th Regiment of Company F, a band of Pennsylvania boys who fought the Confederate Army in Virginia. As many of his fellow soldiers died in camp of disease as perished on the battlefields. John died at home in 1878.

James A. Gay, born 1844, was the son of John and Julia Gay. He enlisted later that Tompkins in the Civil War and was taken into the 210th Regiment formed in Harrisburg in September of 1864. He was killed in action at Hatches Run, VA, on Feb. 6, 1865 and buried there. He was re-interred at the Overfield Cemetery a month later.

There existed an era of relative peace between the second war with the British and the Civil War, and that’s where the story of many of today’s local relatives begins. Other names that visitors will see on numerous headstones include Sterling, Bunnell, Sturdevant, Vosburg, and, of course, Overfield.

The Sterlings were among the most prolific, according to local historian, Marge Walters. Before Meshoppen was bestowed its anglicized Indian name, it was known in 1820 as Sterlingville. After a brief period as Meshoppen, the Sterlingville name reigned again from 1861 to 1866. Meshoppen has been the official name since then. 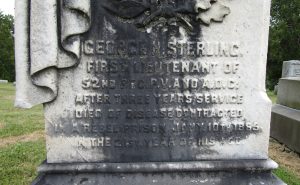 Samuel Sterling emigrated from Connecticut to Exeter before moving to Falls, then Wyalusing and eventually purchasing a large tract of land in Black Walnut Bottom. He married Mary Gregory, and they had 10 children.

“Of the 10 children, Daniel and his sister, Harriet, made the Sterling/Overfield connection,” Singer explained. Daniel had three wives, as the first two died shortly after childbirth. Harriet married Nicholas Overfield, son of Paul and Hannah Depew. Hannah was a child survivor of the Indian uprising in Wyoming Valley in 1778. Legend has it that the lives of her siblings and mother were spared by an Indian whom her mother had once nursed back to health. 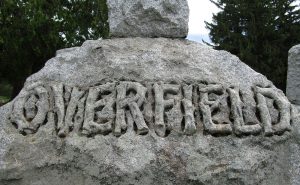 Peacetime never seems to last, of course, and many man and women interred there from the late 1800s through the next century were also veterans. Henry Baker fought with Gen. Grant through the end of the Civil War. Lee Allen is listed as the first Meshoppen casualty of World War I. World War II veterans included Martin Harrison Cortright, who died of pneumonia in Europe, and Frederick Fassett, who was killed in action in a foxhole between Nancy, France and Frankfurt, Germany after receiving two purple hearts for wounds received.

George Kennard, whose family name once dotted Meshoppen, fought in the Civil War under Gen. McClellan at the Battles of Williamsburg and Fair Oak before returning to Meshoppen to build the hotel that bore his name. His daughter, Frances Kennard, attended Drexel Library School and returned to direct library activities locally, and the Kennard Memorial Library in Meshoppen was dedicated in her honor.

Mostly retired, the Overfield Cemetery Trustees note that they are the descendants of Depression-era families. Their parents were very conservative with money, and they passed that frugality down to their children. Three of eight board members who met at the Overfield Cemetery on a recent humid summer afternoon suggested it is that sense of thrift has allowed the Trustees to keep up with costs for mowing, clearing old trees felled by storms, and repaving the roadways between the plots.

In the past year, the U-shaped road through the cemetery has been repaved, much dead wood was removed, and numerous old stones were straightened. Righting the centuries old markers was a labor of love and respect for board secretary Wayne Sherwood, whose ancestors there include the McMickens, Dunlaps and Carters. His grandfather, Arthur Carter, served as its sexton for Board of Trustees in the 1950s. Sherwood maintains many of the cemetery’s old records.

“We feel responsible to keep it in shape so the next two generations don’t have to start from scratch,” said trustee Gail James, whose great-great-great grandfather George Capwell is buried there, as well as a number of her Smales ancestors.

James is an avid historian who visits and photographs grave sites around the region and conducts a lot of research online. While still quite spry at 80, she is not alone in her concern for the long-term maintenance of Overfield and so many local cemeteries like it. “We’re torn,” she conceded. “Is it our responsibility or the families’?”

The Trustees contract with various companies and individuals for mowing, grave digging and tree removal. There are still burial plots available for purchase at the Overfield Cemetery, and many families enter perpetual care agreements with the board.

Those interested in supporting the efforts of the Overfield Cemetery Board of Trustees in any way may contact board treasurer W. Kenneth Price at 570-836-3834. 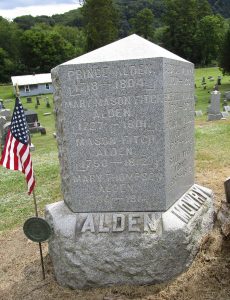 The Alden/Mowry stone, marking the plot in which direct descendants of Plymouth Rock settlers John and Priscilla Alden were interred. Prince, George, and Ezekiel were veterans of the Revolutionary War, War of 1812, and Civil War, respectively. Prince’s son, Mason Fitch, survived the Revolutionary War, erected the first grist mill on Meshoppen Creek before 1800 and died here in 1812. 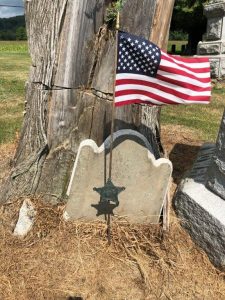 Trees initially planted for aesthetics become obstacles and then disruptions in cemeteries, as this one did to the final resting place of Elias Mowry, son of Charles and Sarah Titus Mowry. 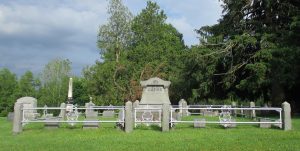 2019-09-18
Previous Post: Pursue Your ‘Hoppiness’ in the Endless Mountains
Next Post: Ranking Bradford County’s Bucks and Bears a Family Tradition