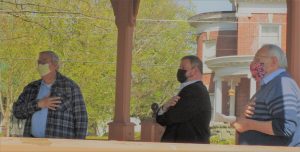 A sizable crowd of people (top) who want businesses reopened in Wyoming County listen intently to rally organizer George Yuhas (in gazebo). Above, county commissioners (from left) Ernie King, Tom Henry, and Rick Wilbur put hands to hearts for the national anthem and pledge to the flag.

‘Rally for Wyoming County’ organizer George Yuhas called on supporters who gathered at the courthouse in Tunkhannock on Thursday morning to maintain a sharp focus and to embrace the entire U.S. Constitution in their efforts to begin reopening businesses in the wake of the COVID-19 crisis.

“First, we need to get over the virus, which we know is real,” he said in his opening remarks, conceding that navigation of the pandemic by various levels of government had to be difficult. But, Yuhas continued, the time has come to push back against “the overreach and the elongation of everything that’s happening,” which he deems unconstitutional.

While some were disappointed with the turnout, others, including the county commissioners who were more aware of the short amount of time in which the event was coordinated, were impressed with the people from many walks of life who met at the gazebo.

In large part, the rally was organized as a peaceful protest to Gov. Tom Wolf’s decision last week to keep Wyoming County in the “red zone” as part of his plan to slowly and systematically reopen the economy of the Commonwealth.

County officials were relatively confident prior to the governor’s May 1 press conference that their outreach to Harrisburg and the support from state and federal legislators earlier that week would get the county included in the “yellow zone” with rural northcentral counties. Instead, Wolf elected to keep Wyoming County in the red zone with neighboring Lackawanna and Luzerne counties, the COVID stats for which are exponentially higher as are the populations.

Commissioners Tom Henry, Rick Wilbur, and Ernie King said that the letter they drafted and sent to Wolf on April 28 went unanswered. “His response was total silence,” Wilbur related in his address to the crowd.

“We don’t know what’s going to happen next,” Henry conceded.

If the county cannot be reclassified from the red zone soon, Wilbur said of the governor, “At least give us some direction on how to get there.”

While a number of people in the crowd were tossing about the term “socialism,” Yuhas cited communism as a catalyst to a long-term dismantling of the rights of American citizens. As an active soldier and marine, Yuhas related, “wherever I’ve been in the world, I’ve faced down Russian and Chinese weapons.”

As in communist countries, he continued, the current directives of the Pennsylvania governor are dividing citizens who would normally be working together to deal with the crisis. “People are keeping us apart,” Yuhas remarked. “We love Pennsylvania, but we are here to cover our county today.”

The Constitution, he maintained, was designed to preserve our liberties and keep the right of decision in our hands. “If you allow too many things not to be challenged in the Constitution, they will keep happening,” Yuhas remarked. 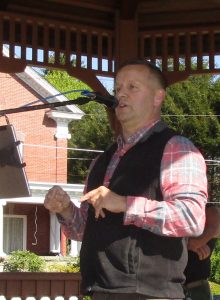 When a woman in the audience spoke out that churches were feeling the pinch in a way different from but equal to small businesses, Yuhas (above) said, “Don’t be distracted. Be a model. Use the Constitution – all of it – including religion.”

The commissioners, each from a small business background, maintain that public health and safety remain their highest priority, but each pledged their support in getting businesses opened as soon as possible within prescribed guidelines. “All of the commissioners here are focusing on getting Wyoming County back into business,” commissioner Ernie King remarked.

Henry suggested that, while county officials try to figure out what their next step is, those in attendance should reach out to Harrisburg and write letters of their own to Gov. Wolf. “You have a bigger voice right now than we do,” he said.

“We have a long way to go, and we’ll do whatever we can to help you,” Wilbur added.

“We literally have to outlive the effects that this is going to have on us,” Yuhas said in his closing remarks.

Some of the signs held by rally participants pushed for reopening businesses in defiance of the law. Neither the commissioners nor Yuhas condoned such actions but, Yuhas conceded, “The businesses that will try to open up are on the verge of going under anyway.”

The speeches at the courthouse were preceded by a peaceful march through town and a number of people following a prescribed driving route. According to Tunkhannock Borough mayor Staci Huber and police chief Keith Carpenter, there were no permits needed for the gatherings because participants were only accessing public property and intending no disruptions of traffic.

Carpenter had several conversations with Yuhas prior to Thursday and was confident that there would be no problems. “He said that they would follow all the rules, and they are doing things in a respectful manner,” said Carpenter. “And they are not getting in the way of the functions of the courthouse.”

In addition to the presence of a number of police officers on foot at the courthouse, others were in cruisers, monitoring the flow of participants along the walking and driving routes. 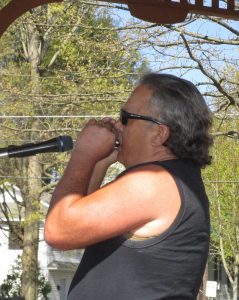 “Eddy the Harp” stirred the crowd by playing a rendition of the national anthem on his harmonica. 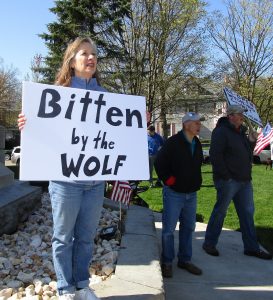 Whipple Dance Studio owner and instructor Kim Whipple jockeys for a better position at the courthouse. 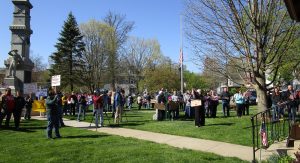 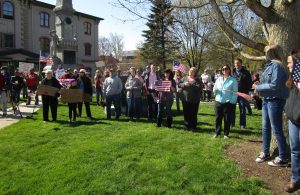 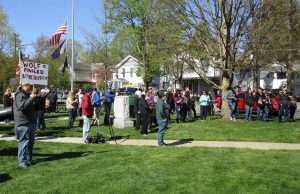 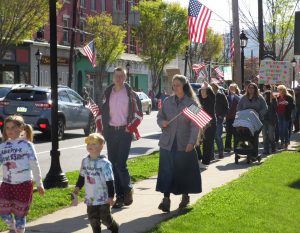 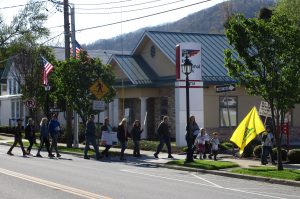 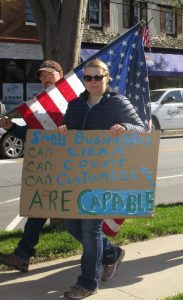