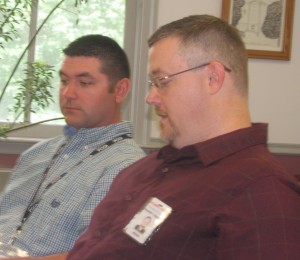 Wyoming County Prison Warden Ken Repsher (right) and Deputy Warden Gordon Traveny were happy to report that the facility in Tunkhannock received a Full Compliance rating during an annual state inspection on May 22.

Population at the Wyoming County Prison dipped slightly in May but is still not as low as county officials would like to see it. Solicitor and Prison Board member James Davis noted during a June 5 meeting that there are 16 female inmates at the facility. He asked Warden Ken Repsher what was currently driving female incarceration rates. Repsher replied that it was mostly drugs and parole violations. Retail theft was also a factor, he noted, but drug addiction is often the catalyst for those thefts.

Plumbing has been installed at the prison for the new hot water system. The old system thankfully made it through the long winter despite being antiquated. Commissioner Tom Henry noted that he had visited the prison to observe the construction and was impressed by its complexity. There will be three boilers when the project is completed, each capable of handling the needs of the facility should one or two boilers shut down or require maintenance.

Repsher asked the commissioners for a memo of understanding for PathStone to involve the jail in a reentry program geared to facilitating the return of prisoners to civilian life and the job market.

“They would deal with the inmates prior to them leaving the institution, then follow up with them when they get out,” said Repsher. “There is no cost to the county. There are only benefits.”

“Anything that would help with the revolving door problem we have would be great,” Henry remarked in reference to the rate of recidivism experienced by many prisons.

Repsher noted that the PathStone counselor with whom he had spoken told him that the program has been successful and well-received in Luzerne County.

The commissioners seemed genuinely interested in the program, but Ron Williams recommended that a copy of any contract that would be signed between the county and PathStone be fully reviewed in advance of an agreement.

Henry proposed to Repsher that he and Deputy Warden Gordon Traveny consider filling a single position on the Drug & Alcohol Executive Board on which Henry already serves. “I think that it’s important to get your voice into the conversation,” Henry told Repsher, “because you deal with a lot of the people who receive treatment.”

“It would offer a new perspective,” Commissioner Judy Mead concurred.

Repsher related that he had previously attended one of the meetings and didn’t sense that the agenda was relevant to the prison but told Henry that he would attend another meeting and consider his request.

“Maybe it would pertain more if you were involved in the meetings,” Mead suggested to Repsher.

The best news since last month’s prison board meeting was that the facility had passed its annual inspection with a perfect score. Repsher credited the staff at the jail for their hard work and dedication that led to the Full Compliance rating on May 22.

Prison guard Albert Olive was in attendance to remind the board that two members are mandated to serve on a health and safety committee as per the collective bargaining agreement between the prison’s union and the county. Sheriff Ned Sherman and Commissioner Williams quickly volunteered to fill the positions.

The prisoner transport van that was scheduled to be delivered to the county on May 12 was first delayed because the insert on which the inmates would be seated had not yet been installed. While it was at a dealership in the Downington area, Sheriff Ned Sherman noted, the van was slightly damaged when a line of hail storms moved through the area. The hailstones were not as large as in some nearby locales, and what little damage there is was primarily limited to the roof. Sherman is hopeful that the dents are being repaired this week and that the new van will arrive and be placed into service next week.