Preserving the History of the Tri-Boro Area for Future Generations 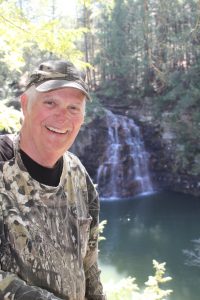 Jon C. Burdick had no intentions of becoming a noted local historian. After graduating from the Laurel Hill Academy and Broome Community College with a business degree, he did a stint in the U.S. Coast Guard before embarking on a varied career that included security, shipping, and a number of clerical and hands-on positions at Barnes Kasson and Lourdes hospitals.

He met is wife Mary Ann when they were both members of the Choral Society, which put on plays and musicals at the local high school in the early 1970s. They later both worked at Barnes Kasson Hospital. When Mary Ann passed away in 2001, Jon took up photography as a new hobby to “bide his time.”

A friend showed him how to mat and frame his best photos, and he started selling them at shows. He was doing quite well with his “retirement job” when he decided to reproduce and frame some old photos that he had collected over the years.

“They were selling better than my own photos, so I started producing more of them,” Jon related. Black and white and color images of downtown scenes, forgotten factories and classic vehicles were popular, he noted, but his patrons were obsessed with his railroad photos. Generating the most interest were images of bridges and train stations.

Jon started looking deeper into the history of the tri-boro area that includes Susquehanna, Oakland and Lanesboro and found a lot of useful information in an 1872 book by Emily Blackman titled Chronicle of the History of Susquehanna County. One hundred years prior to its publication, Jon explained, the tri-boro area was a dense wilderness, populated by mountain lions, elk, rattlesnakes and Native Americans representative of several tribes.

“There were no white people here, except for maybe some trappers,” said Jon. The Susquehanna River and footpaths used by the indigenous people of the area were the only “highways” of the day. That changed rapidly via subsequent events, starting with a military campaign conducted by Gen. James Clinton and followed by the actions of an entrepreneur named Samuel Preston.

Clinton was assigned the northern leg of an expedition ordered by then Gen. George Washington that is more commonly known as the Sullivan Campaign or Sullivan’s March. As Gen. John Sullivan led troops up the Susquehanna River from Fort Wyoming (near present-day Wilkes-Barre), Clinton’s troops followed the river west from its beginnings near present-day Cooperstown, NY. The purpose of the campaign was to rid the region of members of the Iroquois Confederacy who were loyal to the British.

“He encountered a Tuscarora tribe at (present-day) Lanesboro and left them alone because they were considered friendly, but the tribe he found at Red Rock – likely Oneidas – had to be pushed out of the way.” Both tribes had once lived in concert along the river, forging their own trails through the thick forests to secure resources like salt from what is now Salt Springs State Park.

With the “Indian threat” diminished, Colonial settlers – many of them Revolutionary War veterans – began moving into the area. Life there was unimaginatively difficult for these people who considered themselves cultured. Luckily, some remaining friendly Native Americans taught them how to hunt, fish and store food. But they were still lacking basic commodities that could not be delivered in bulk to them via the river.

That’s where Samuel Preston comes into the picture and where Jon’s quest to connect the past with the present begins. “He built a portage trail from Stockport in Wayne County to Harmony in Susquehanna County,” Jon explained. “It provided a link from the Delaware River to the Susquehanna River.”

With supplies being shipped up the Delaware River from Philadelphia and then moved on foot or by oxen cart over the 22-mile portage trail, trading villages began to pop up in both Pennsylvania and New York, including an important port at Great Bend. As the population grew, so did the awareness of the new settlers that they were inhabiting a land that was still very wild. “At Red Rock, they almost walked away because of the number of rattlesnakes. The settlers hired local farmers to clean them out,” said Jon. “They killed 445 of them in one day.”

By the 1840s, the portage trail and river alone could not bring supplies to the area quickly enough to meet increasing demands nor allow for efficient export of commodities and resources from the region. That’s when the railroads came into play and where Jon’s passion for local history is seriously stoked.

According to his records, Henry Drinker, a prominent Philadelphia lawyer who owned thousands of acres in Susquehanna County, sold 300 acres in 1848 to the Erie Railroad, which began construction of rail yard and locomotive factory that would transform Susquehanna into a major hub of east coast transportation. Construction of the Starrucca Viaduct was started at about the same time.

Thousands of workers were brought in to build bridges, run rail lines, and construct shops that supported the railroads. As the projects neared their first phase of completion, Erie Railroad gave plots of land running up the western hillside to workers for them to build homes.

The network of rails spread like spokes of a wobbly wheel, meeting the Delaware & Hudson lines coming up from the south and creating other smaller hubs and new towns where there was room for a station. “From Alford, you could go to Tunkhannock, Montrose or Susquehanna,” Jon explained. “It might take you a while, but you could get there.” He is still amazed at how slight the grade is on the various lines, despite the rugged terrain. “They would cut through anything in their way,” he said of the crews of linemen, who had only gun powder for the first two decades until dynamite became available to them around 1869.

In addition to collecting photos depicting the rapid development of the tri-boro area and the high level of energy sustained by the railroads for many decades, Jon and long-time friends Dana Rockwell and Craig Benson started applying the massive treasure trove of history to their own exploration of the hillsides and ravines that surround the towns.

With old maps and photos in hand, they plan hikes into areas that have been fairly void of human activity in recent years to identify remnants of the past and preserve them through photographs for future generations. They have located the stone quarries from which rock was removed to build the Starrucca Viaduct. “They took the rock to a site where they were chiseled to form them,” Jon explained. “There was a separate team of builders for each of the viaduct’s 18 arches.”

In 2011, Jon started the Facebook page Remember Susquehanna PA on which he posts almost daily. Using a photo, a personal memory, or a newspaper clipping, he likes to start conversations to motivate responses from people who can provide more information on a topic, as well as their personal insights.

“I don’t pretend to know everything. Sometimes I have to make guesses at years based on cars and other things in the photos,” he explained. “I put a lot of stuff on because I won’t be around forever.”

A recent post details a return by Jon and his hiking buddies to the Cascade Creek area, also known as the Devil’s Punchbowl. Doubly significant because it was at the western end of the portage trail and once the site of a single-arch 276-foot wooden Erie railroad trestle. Trains often stopped on the bridge to afford passengers beautiful views of the hillsides and waterfalls. The bridge kept catching fire, was eventually destroyed and most of the ravine was filled in, which took about 10 years. When they were there last, the hikers also found where the portage trail completed its final, steep descent to Susquehanna.

“When he got to the Cascade Valley, Mr. Preston did not know how to get down to the bottom,” Jon wrote. “He met up with one of the first settlers in our area, Mr. Moses Comstock, who told him simply to follow the animal trails that got to the river, and that’s what he did. That portage trail really started everything for this area.” 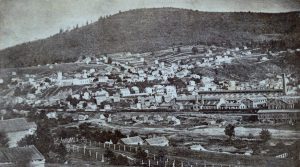 Susquehanna Depot, taken from Oakland showing Catholic Church and Presbyterian Church, 1867. The newer St. Johns Church to be built within 10 years, this church facing the other direction to the entrance. 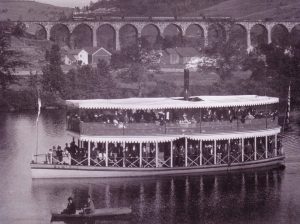 Photo #3 Steamboat Earminie around 1898 – it docked at present day Pinecrest Campground (just down from Windsor Golf Course) cruised down to Lanesboro, very popular ride.  Boat burned down while moored around 1900. 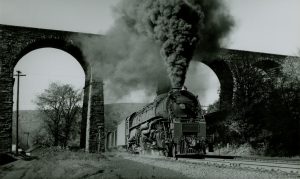 Steam locomotive under Starrucca Viaduct around 1946. 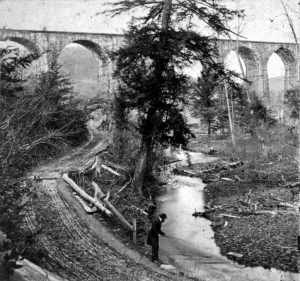 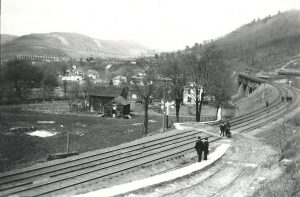 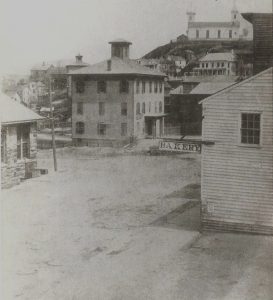 Main Street Susquehanna 1870 School at present day parking lot Dollar General and Methodist Church.  Fire destroyed school in 1874.  Bakery is at Franklin Ave and Main Street.  That whole block from Erie Ave to Franklin Ave also destroyed by fire, not sure if the same fire with school or not. 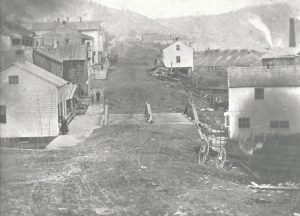 Main Street Susquehanna, bridge goes over Drinkers Creek, around 1860, shops would be rebuilt and moved closer to Main Street in 1865. 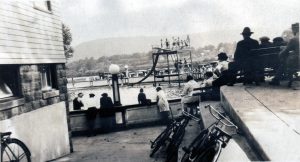 Victory Park swimming pool, just outside Oakland, about 1920, Erie owned and operated to be used for the towns people, eventually destroyed by numerous floods. 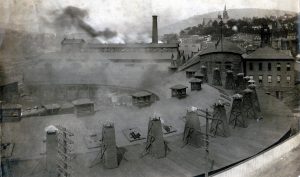 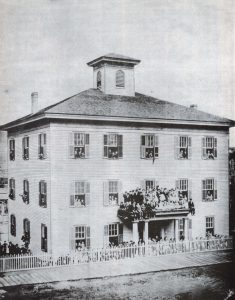 School at the present day parking lot of Methodist Church and Dollar General 1870. 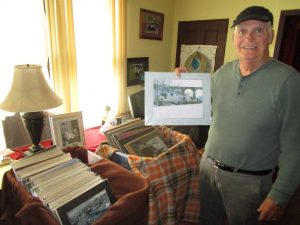 Jon shows one of his favorite prints of the Starrucca Viaduct.