Persistence Pays Off for Local Auctioneer

(Originally published in the Rocket-Courier)

A third generation auctioneer from Auburn Center took the top spot in the Pennsylvania Auctioneers Association’s 44th annual bid-calling contest at the Pennsylvania Farm Show on June 11. The evening event brought together 17 auctioneers from across the state, who demonstrated their bidding style and abilities in front of a panel of nine former winners of the contest.

This was the fifth time that Brian Burke II and his family had traveled to Harrisburg for the event. Brian had taken second place for the last three years in a row and was ready to break the curse.

He has heard the sound of bidding since he was a toddler, referring to auctions run by his grandfather, Jerry Burke, as his “babysitter.” At 15, he went to the Reppert Auction School in Indiana and has been a familiar face and voice behind the pulpit ever since. Wondering briefly if there might be another path for him, he attended Penn Tech for two years and studied heavy equipment operation. But it didn’t feel as good as the auctioneering gene that had shaped him. He was 20 at the time and decided to revert his focus to bidding.

“I got a job at Lehigh Valley Auto Auctions, and the rest is history,” Brian stated. After stints with other auction companies in Atlanta, Houston, and Washington, D.C., and some work selling real estate, he started working closer to home, helping his family run Shamrock Auctions and working four or five auto sales per week at the Manheim Auto Auction, one of the largest of its kind on the east coast. He still works with Lehigh Valley Auto Auction owner, Jerry Meklochik, whom he credits for giving him his start.

Having run auctions since 1963, Jerry Burke retired a few years ago, and Brian and his father, Brian Burke, Sr., kept things going with Brian Burke Auctions. Brian bids at Wednesday night auctions with his father and helps out at Burke’s Gun Shop in between trips to Manheim in Lancaster County.

Live auctions differ greatly from the bidding contests like the one at the Farm Show, Brian maintained. “It’s not even close. I can auction in my sleep. I’m always doing it in my head,” he explained. “I can sell one car after another for thousands of dollars each, and it doesn’t mean a thing.” In the Banquet Room at the PA Farm Show Complex, however, Brian was on stage in front of nearly 600 tightly-seated spectators and a TV camera pointed at him from every aisle. “Knowing you’re being judged makes a big difference.”

There are four rounds of bidding, the first round being practice to give the contestant a sense of the acoustics of the room and how to move on the stage. The format is an ascending bid style auction, where the auctioneer grabs a low, opening bid and pushes it up to a top, closing bid. Each participant brings two familiar items with them and auctions them off in turn. Brian was contestant number nine. He sold a DeWalt socket set during his practice round and a pedal Caterpillar excavator child’s toy for his first judged round.

Oral bidding styles vary greatly. The pace and tonal range of the bidder can shift quickly as the excitement over a particular item builds or wanes. It was obvious to this reporter that Brian’s unique patter during his practice round alone was going to land him close to the top again.

“You’ve got to set yourself up for success to get to the finals, then it’s a new competition,” Brian remarked. “Your nerves start to get to you. There’s a lot of standing around watching other competitors and thinking about what you’re going to do.”

After the second round, ten finalists are announced, each of whom is assigned two random items that they have a limited amount of time to learn about. Brian’s final item was a sterling silver and pearl bracelet. When the bidding was done, the judges huddled to compare notes and sent 2022 bid-calling contest winner John Stauffer to the stage to announce the winners, starting with third place.

Being among 10 bidders on the stage and having just giving his all to the contest, Brian admits that he had no idea how he’d done. “It was a really tough competition. There were a lot of guys out there doing a great job. They called ‘third’ and then they called ‘second,’” he recalled, at which point time seemed to stand still for a moment. Then, Brian Burke II was proclaimed the winner.

“It felt great. I was really happy,” Brian stated. Stauffer presented him with a framed gold auctioneer’s gavel and a large trophy. “My uncle (Pat Burke) won it 2011, and his name was already on it.” The trophy is carried from one year to the next, and Brian is happy to finally have his name added, carrying on a family tradition.

When asked what he thought the judges saw in him this year that they hadn’t seen before, Brian answered, “I was a little calmer having been in it a few years. I think I knew better what to expect.”

The long-term protocol of the contest is for every new winner to serve as a judge the next year, as Stauffer did. Every five years, the Association conducts a Champion of Champions bidding contest, for which Brian will be eligible to enter.

Brain was accompanied to Harrisburg by his father, his mother Pam Burke, his girlfriend Julie Spadine, his sister, Ashley Burke and her fiancé, Tyler White, all of whom had an opportunity to join him on the stage as he gripped the trophy and smiled ear-to-ear. Brian expects to eventually find a proper place to display the trophy and gavel at the Burke Gun Shop in Meshoppen. 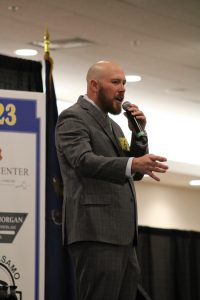