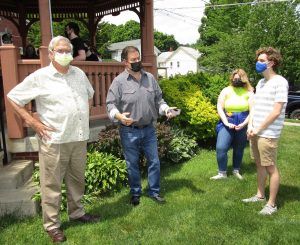 Led by Ceejay Appel and Rosie Culver (top, far right), attendees at the Black Lives Matter rally begin their march toward the middle of Tunkhannock from the courthouse lawn on Friday. Above, Wyoming County commissioners Ernie Kind (left) and Tom Henry offer their support to the organizers of the peaceful event and encourage them to “stick up for what you want to and need to.”

While there were certainly people of all ages participating in Friday’s Black Lives Matter rally and march in Tunkhannock, it was obvious that the driving force behind the event was a group of people in their teens and 20s. Just over 100 supporters of the movement, spurred by the recent death of George Floyd under the knee of a rogue police officer, gathered on the lawn of the Wyoming County courthouse to share their angst and their hope for the future.

At the core of the demonstration was the Tunkhannock Human Rights Association, which included current and former members of Breaking Ground Poets, a group of primarily Tunkhannock High School students who often speak up against racism, sexism and oppression. Yesterday, they found many like-minded people among their fellow county residents who responded positively to their pointed and passionate statements.

Anthony Eckert (above, right), who had initiated the rally, provided opening remarks and commented on the turnout, noting that he hadn’t expected half as many people to show up. Ceejay Appel brought the event into focus, naming a half dozen African Americans, including Floyd, who had died in the custody of or in altercations with police. He also provided the logistics of the march, reminding participants to be respectful of downtown businesses that are reopening in the wake of the COVID-19 situation.

Rosie Culver (below) explained what it was like to grow up with the white family who had adopted her. They were a loving bunch, she stressed, but she had no idea that she was black until she got older and her classmates identified her as African American. 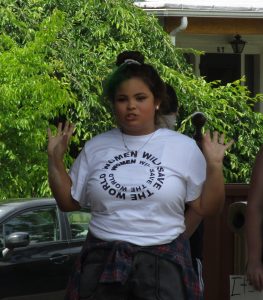 “When that layer of innocence leaves you, you look at things differently,” she remarked. Police cars that fascinated her as a child came to represent something she should fear. “We say that this is the land of the free, but why is everyone not free to live their lives and not be afraid.”

Tiaghee Daughtry told of coming to Tunkhannock via Philadelphia as a child and being raised by a white family. He considers himself lucky in that he was not the target of racism very often as a youth. “You accepted me for being black, but I did not accept myself,” Daughtry (below) told the crowd. “When you don’t know where you come from, you don’t know what you are supposed to do.” 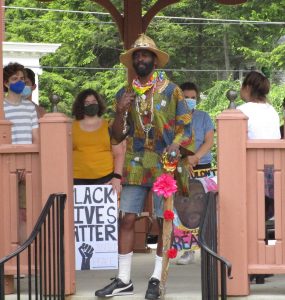 Trying to figure out what it was to black by watching television was detrimental, he continued. He went through some dark days and had to reconnect with his inner self to be proud of who he is. Today, he said, “I’m so proud of all of you for being here. We should be dancing and singing and eating together – not fighting.”

The event at the courthouse was marked by a somber moment before the march, when Culver asked those in attendance to kneel for nine minutes, the approximate time that Minneapolis police officer Derek Cauvin pinned George Floyd to the pavement with his knee, taking away his ability to breath.

Signs in hand and chanting slogans like “Black Lives Matter” and “Say His Name,” most of the people at the courthouse walked to the intersection of Tioga and Bridge streets, where they continued to express their sentiments for another hour or so. People driving through town were largely supportive, Appel said afterward. He and others were satisfied with the peaceful nature of the demonstration and the response. 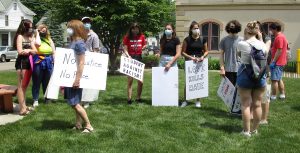 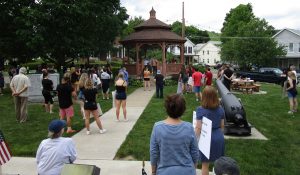 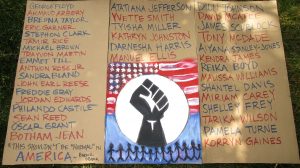 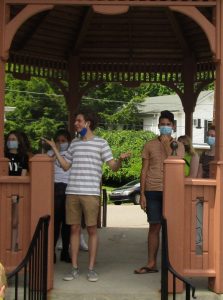 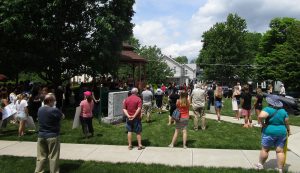 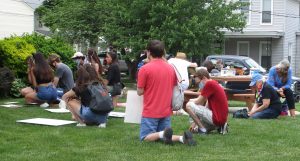 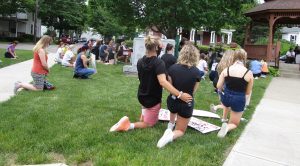 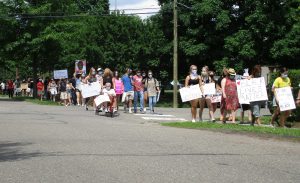 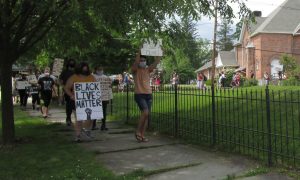 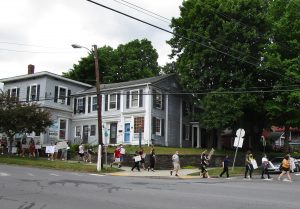