In: Wyalusing
With: 0 Comments 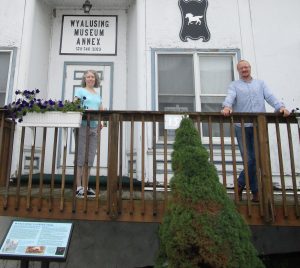 Kayakers (top) enjoy a spring paddle in the area of Wyalusing, where a Fall Heritage Paddle is planned for Saturday, Oct. 10. Above, Wyalusing Valley Museum director Morgan Clinton (left) and EMHR director Cain Chamberlin safe distance on the front porch of the former Masonic Lodge on Church Street, which provides the museum’s current exhibit space. The two organizations have partnered for the Fall Heritage Paddle as a fundraiser for the museum.

Wyalusing in southeastern Bradford County has deep roots as a river town, even though travelers along Route 6 today might miss that connection as they drive through. As the railroads and highways replaced the Susquehanna River as the primary mode of transportation, its influence as an economic driver for Wyalusing faded as vegetation reclaimed what remained of canals, ferry landings, and Native American settlements. 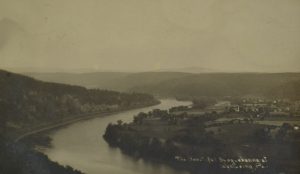 Recreationists, including anglers and paddlers, are some of the few people to see and access the nationally-recognized Susquehanna from points near Wyalusing on a regular basis. The Wyalusing Valley Museum Association (WVMA) and Endless Mountains Heritage Region (EMHR) want to extend that experience to the community. They are partnering on a unique paddling event by which participants can get a history lesson on Wyalusing’s long relationship with the river.

The Fall Heritage Paddle will be held on Saturday, Oct. 10 and will cover a stretch of river from French Azilum area down to Sugar Run, where participants will begin and end their adventure at Endless Mountain Outfitters (EMO). Outfitter owner and EMHR waterways manager Keith Brown will coordinate the event, and registration will be handled by the EMHR via a link at www.emheritage.org. 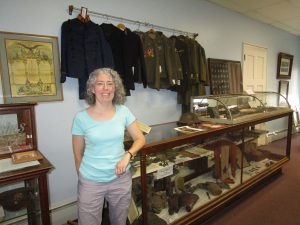 Wyalusing Valley Museum director Morgan Clinton is excited about offering an historic tour of the Wyalusing area from the river. Highlights will include the iconic Standing Stone, French Azilum, Homet’s Ferry, Wyalusing Rocks and Friedenshutten. The excursion will conclude at EMO after paddlers enjoy a meal prepared by Old School BBQ and sample beverages from Deep Roots Cider.

“We thought it would be a great opportunity to support four local entities,” EMHR director Cain Chamberlin said of those partnering for the event, which he noted could serve as a new model for fundraising. WVMA and the EMHR have a long relationship as heritage partners, and the paddle seemed like the safest way – given the COVID situation – to get a group of people together on the water, and raise money for the Wyalusing Valley Museum to help cover general operating expenses.

Tickets for the Heritage Paddle, which must be ordered by Oct. 2, include shuttling, catered meal and cider tasting and can be upgraded to include kayak or canoe rental. EMO staff will conduct a safety briefing prior to departure by shuttle to the upriver launch site. Clinton will offer a presentation at the end of the trip to wrap up the historical overview.

Proceeds will help to offset a loss of funds from the canceled Wyalusing Wine festival, which would have been held in September. According to Clinton, the wine festival brings in as much as $6,000 per year into the museum, which is in the process of renovating and making the best use of two buildings that represent its new footprint in downtown Wyalusing.

Currently, the bulk of the exhibits are housed in the former Masonic Lodge at 158 Church Street and can be seen on Saturdays and Sundays between noon and 4 pm by calling 570-746-3979. In most cases, a museum associate can meet visitors there within 10 minutes. Guests may be accommodated during the week by calling the same number at least three days in advance.

The building at 25 Main Street is earmarked to become the museum’s primary exhibit space. When the transition to Main Street is complete, Clinton related, the first floor of the Masonic Lodge can be used for workshops, interactive programs, movie screenings, and other activities. A full kitchen is available for other events. The second floor of the lodge building houses historical reference materials and will continue to serve as the museum’s research center and can be accessed by appointment.

“We’re trying to think what we can do in the fall,” Clinton said of the challenge of scheduling events under ever-evolving COVID guidelines. “We’re hopeful that we will be able to offer some smaller programs.” One idea that is floating around in her head is a night of playing historic board games and classic parlor games. Museum supporters can also look for an increased social media presence and YouTube videos as the museum completes is transformation.

Speaking of floating, tickets for the Fall Heritage Paddle are discounted for early-bird registrants through Friday, Sept. 18 at $95 each including kayak rental and $65 each without. After then, the costs are $110 and $80, respectively. The entire event will run about eight hours, including four to five hours on the water and a late morning stop near Homet’s Ferry, for which participants should bring a snack or bagged lunch. Safe distancing and other current CDC guidelines will be followed, as will EMO’s safety rules. Registration is limited to 50 adults. 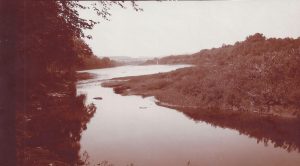 Looking north from Sugar Run toward the old Wyalusing river bridge in the 1930s. 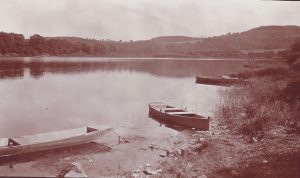 The hills opposite Sugar Run in the 1930s looked much as they do now from the landing at Endless Mountain Outfitters. 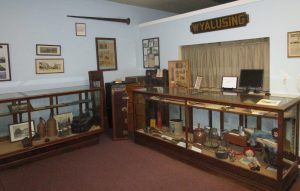 The interior of the Wyalusing Valley Museum Annex. 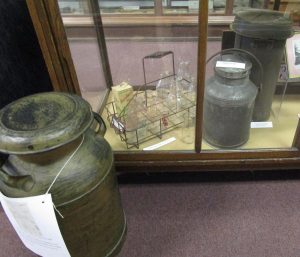 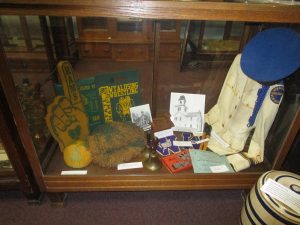 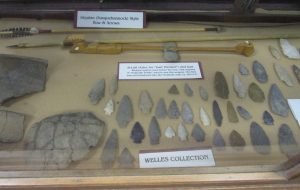 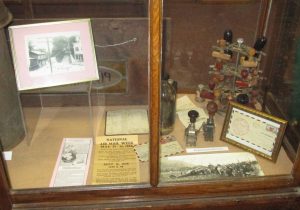