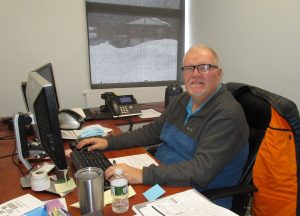 Moody & Associates employees gather outside the office in Athens (top) that they moved into this past summer. Project manager Tracy Cole (above) works indirectly with gas companies, collecting residential water samples and sending them to a lab, after which the data is packaged in a report for the landowner.

Moody & Associates has been providing groundwater and environmental services for businesses, municipalities and residents since 1891. When it became apparent how important water would be to the natural gas industry as Cabot Oil & Gas Corporation and other operators arrived in the region, Moody & Associates opened a small office with three employees in a little garage in Sayre, Bradford County.

“Few, if any, of our industry partners have been around as long as Moody,” said Bill desRosiers, Cabot’s manager of external affairs. “So it is not such a surprise that our relationship with Moody predates the development of the Marcellus shale.”

“Cabot was a pretty big client of ours in northwestern PA,” company president Jeff Walentoski recalled. Moody had done a fair amount of work for Cabot on conventional oil and gas wells for years in the Medina Sandstone, where vertical wells reached depths of 5,000 feet. Moody was, in fact, doing some exploration and drilling of their own.

“We had well-positioned offices prior to the Marcellus in Meadeville and Washington, PA,” said Travis Bennett, one of three company vice presidents and the manager of the new Athens office that opened in Bradford County this past July. Additionally, Moody supplied water, provided traditional environmental consultation, and drilled high-capacity water wells, which the company continues to do for large businesses and municipalities.

“It exploded with the Marcellus play,” Bennett said of the big changes after 2008. Moody was performing baseline residential water sampling, prior to and after gas activity. “In that capacity, we serve as an insurance company for the gas company and the landowner.”

“Already having a working relationship with Moody made them the logical choice to provide the independent, third-party environmental services that we require like data management, regulatory compliance, sampling and reporting, and water supply investigative work,” desRosiers explained.

Walentoski, Bennett and two other partners purchased the company from the Moody family three years ago. “That contract with Cabot is what really allowed this office to grow,” Walentoski noted. The Athens office now has 16 full-time employees.

“I look at it more as a partnership than a relationship,” Bennett said of Moody’s role between the gas companies and the landowners. “A lot of times, we are the first face they see,”

“Moody also serves as the eyes and ears for the corporate guys in the Southwest part of the state,” Walentoski added.

Bennett explained that the growth of the company also allowed them to diversify their services to include asbestos surveying for municipalities and adding a full-time engineer when they noticed that local engineering firms were hiring environmentalists.

Walentoski said that what he likes best about working with Cabot’s managers and employees is that they are passionate about our work. “That seems to be a common theme across the board,” he stated. “They are also so community-minded, which has motivated us to increase our community involvement.”

Moody has been one of the biggest supporters of Cabot’s annual holiday toy drive and participates in the annual clay shoot Cabot started with the Lackawanna County College School of PNG. Walentoski and Bennett have seen, first-hand, the long-term economic benefits has brought to Pennsylvania’s northern tier.

“What Cabot has done for Susquehanna County is amazing,” Walentoski remarked. “They have created life-sustaining jobs and contributed to the workforce.”

“They are a leader in the industry,” Bennett concurred. “They are at the forefront in the Marcellus shale.”

“It’s important to us to help with natural resource development in Pennsylvania,” Walentoski added, noting that Moody is looking to further diversifying their services by seeking new opportunities to provide additional support for the gas companies.

“Moody & Associates has evolved as full-service environmental specialists and consultants, trusted leaders in their field,” desRosiers commented. “And we look forward to working with them for many years to come.” 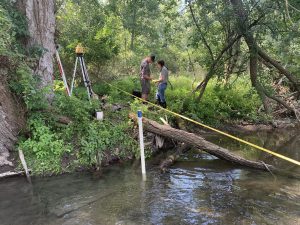 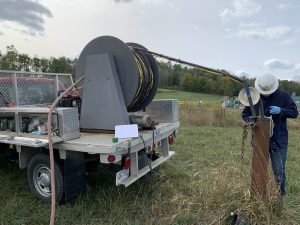 A Moody employee using a reel-mounted pump truck to purge and sample a water well. The well has no existing pump so Moody lowers down a well pump on 2-inch poly pipe in order to collect a sample. 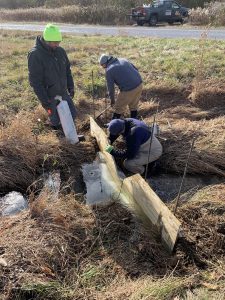