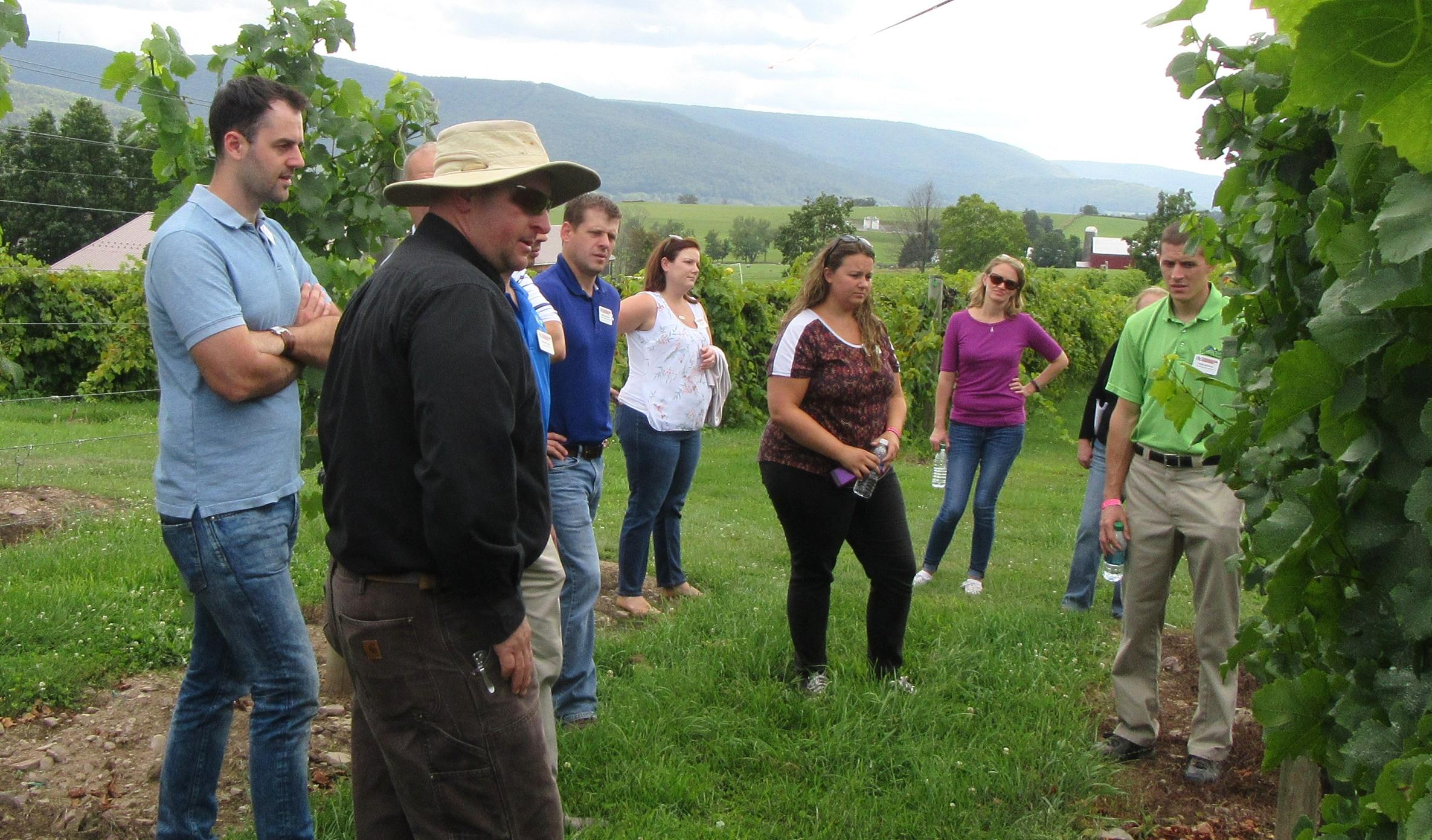 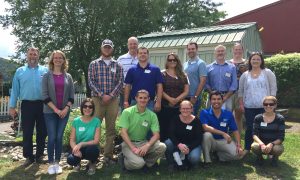 Participants in the 2017-18 Leadership Wyoming program met for the first time on Aug. 30 and embarked on tours of the Wyoming County Fairgrounds and Nimble Hill Winery & Brewery. The theme for the group’s first meeting was agriculture, which coincided with opening day of the Wyoming County Community Fair and the beginning of the harvest season for both grapes and hops.

Wyoming County Chamber of Commerce president Gina Suydam and Leadership Wyoming chair Jami Hearn greeted 12 new enrollees at the Chamber office in Tunkhannock. After introductions and some icebreaking activities, the group moved on to the Wyoming County Fairgrounds, where they were met by representatives of the Wyoming County Conservation District, Penn State Cooperative Extension, county 4-H groups, and the fair committee.

Ed Zygmunt and Chris Faux (below) spoke on behalf of the Conservation District, which oversaw the Clean Water Initiative at the fairgrounds two years ago. The project included the installation of underground tanks and hundreds of feet of pipes and rain gutters to handle about a million gallons of runoff. In addition to curbing erosion and stemming the flow of livestock waste into the watershed, the storage tanks provide more than 15,000 gallons of water for various uses in the livestock area. 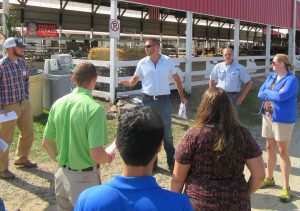 Zygmunt related that the massive undertaking was a collaboration between numerous entities with a shared “resource concern.” Previously, local fire companies were called upon to deliver water for washing animals and hosing down stalls. Collecting water from the roofs of the livestock buildings also provides water for fire hydrants on site.

Livestock Committee representative Amanda Ruark (below) guided the Leadership Wyoming team among pens and show arenas where a number of 4-H members were feeding and grooming a wide variety of animals. Ruark explained that most of the livestock in the 4-H area is less than a year old. While some of the animals are born in the fall, the majority are born in the spring. Participating youths maintain extensive journals as they raise the animals for the purpose of exhibition and sale. 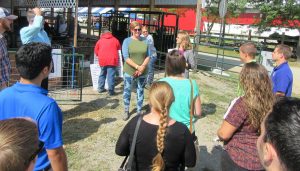 Ashli Quick (below, right) of the Grow’m & Show’m Club shared some of her experience as a long-time 4-H participant while two large hogs at her feet jockeyed for space and attention. When asked by a Leadership Wyoming team member if emotional attachments with the animals make it difficult to part with them at the auction, Quick related that it is easier for her than for some youths. 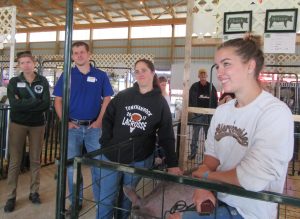 “From the time we were little, we knew what they were raised for,” she explained. “We would ask, ‘Who are we eating tonight?’” Nonetheless, she admitted, older 4-H members do step in to console first-time growers who are having a harder time letting go. Quick plans to go to college to become a veterinarian.

Mark Madden (below, right) of the Penn State Cooperative Extension facilitated a discussion about ways in which the agency serves the agricultural community, from corporate farms to home gardeners, through a variety of programs. He shared the floor with Elizabeth Rosser, who oversees the Master Gardner and Master Watershed Stewardship programs, and Dr. Jason Weigel, who helps champion rural vitality through the Marketing Hometown America Program. 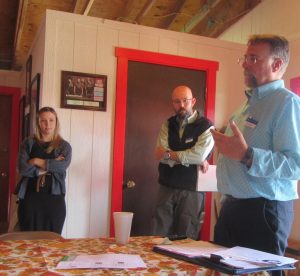 The Cooperative Extension, Madden explained, is part of Penn State University’s College of Agricultural Studies and helps guide its services as a Land Grant University. In recent years, he lamented, resources have become limited, which has forced the agency to focus on the programs for which they are best-known and at the forefront of development and implementation.

After team members enjoyed a lunch break and an opportunity for a quick perusal of the fair grounds on their own, they reconvened at the fair office to learn about the Fair Queen program from board member Ashley Burke (below). Fair Queen is based largely on leadership abilities and a willingness to represent the Wyoming County Community Fair at numerous events throughout the year. That commitment, Burke noted, has become the more challenging element of the contest as teens are encouraged to participate in a greater variety of activities. 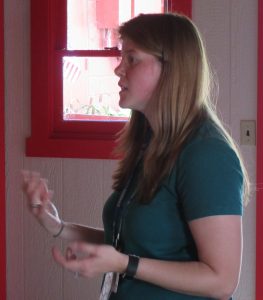 From the fairgrounds, the Leadership Wyoming group traveled to the Nimble Hill Vineyards in Mehoopany Township, where they were greeted by manager Jeff Zick, who provided a tour of the grounds and facility owned by Gary Toczko. In recent years, there has been an emphasis on expanding the acreage of the vineyards to decrease the need for importing grapes from other regions. Zick shared some trade secrets with the tour goers about how the vines are groomed throughout the year to produce a maximum yield. 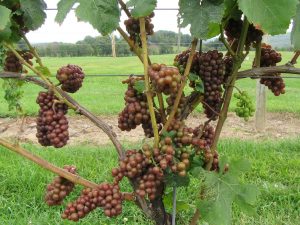 Hops for beer brewing are grown adjacent to the vineyards, and both beer and wine are manufactured on site. Wine maker Matt Karpowicz (below) demonstrated the use of a refractometer used to gauge the readiness of grapes to be harvested based on their sugar content, and brew master Michael Simmons fielded questions about brewing technique and on-site production of nearly 30 varieties of beer. 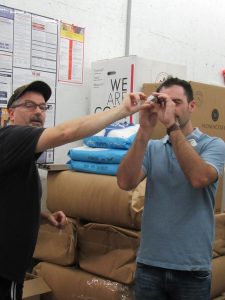 The Leadership Wyoming crew returned to the Chamber office for a debriefing that included completing surveys about the day’s experiences. The group will meet again for two days on Sept. 20 and 21 at Camp Lackawanna. The two-day retreat will focus on leadership techniques. Additional topics to be covered through May 2018 include heritage, culture & tourism; energy & sustainability; government; health & wellness; community & human services; economic development; and manufacturing. The group will also assist with a student career fair as a service project.

“There’s a need in our county for the next generation of leaders,” Suydam said of the program, which the Chamber brought to the county last year. “It has helped us grow as a board and an organization. It is moving our chamber to the next level as we strengthen relationships with our member businesses.”

“The most rewarding part about last year was seeing the community built among the class as they went out and became more involved with the community at large,” said Hearn.

To learn more about the program, interested readers may visit www.wyccc.com. 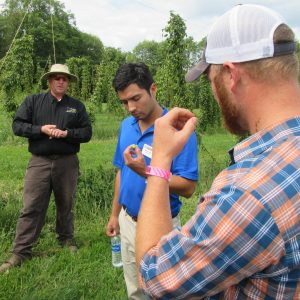 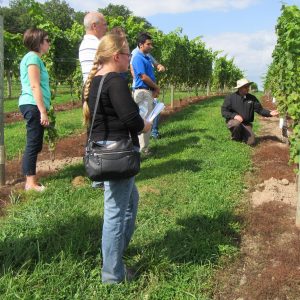 Leadership Wyoming group members were versed in the proper techniques for grape vine maintenance at the Nimble Hill vineyards near Mehoopany on Wednesday by facility manager Jeff Zick (above, right). 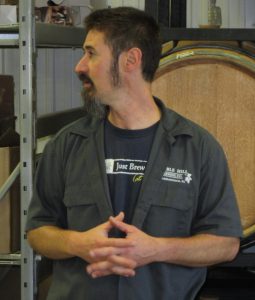 Nimble Hill brewmaster Michael Simmons explains the process behind brewing, bottling and filling kegs during a tour of the Mehoopany facilities by Leadership Wyoming team members. Hops (below) grown on site are about ready for harvesting. 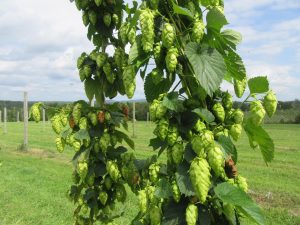