Of 13 Susquehanna County 4-H members who traveled to the Pennsylvania Farm Show in Harrisburg this past weekend, six placed high enough showing their lambs to advance to the youth livestock auction that was held on Tuesday morning.

Kowalewski brothers Andrew, Christopher and Jack each placed with lambs, as did brothers Aiden and Alex Empet and Amanda Voll. Getting their animals to the Winner’s Circle is an honor in itself. But the Farm Show experience also helps build character in the youths and helps shape their futures. 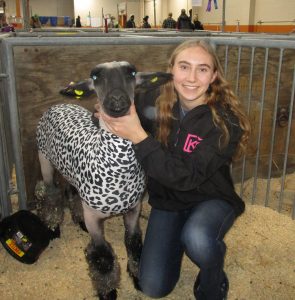 Amanda (above) is a junior at Elk Lake High School. She had previous experience showing dairy cattle and, after watching other youths working with lambs, thought she’d give it a try this year. In comparison, she said of showing Dexter, “You definitely have to have more bonding time with them because you have to get them into sync and used to you touching them.”

Amanda went to the Farm Show with fellow Elk Lake students and 4-H’rs Celeste Clark and Jillian Gustin. The rest of the winners all attend Mountainview High School.

The Empets, including sister Chelsea, raise mostly cows on their family farm in Kingsley. But the youths have many collective years under their belts showing a variety of animals. Seventh-grader Aiden’s lamb, Bumbi (short for Bumblebee), took first in his weight class. He (below, right) was happy just to be back in person with his friends at the Farm Show. 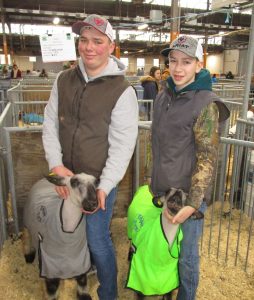 Alex (above, left) is a junior, and his lamb, Frank, scored a fourth-place finish. Over the course of seven years, he has also shown dairy cows and market hogs. He enjoys working with the lambs because of their unique personalities. “Some are friendlier than others and make funny faces,” he remarked.” As he gets closer to graduation, Alex is becoming more interested in following family tradition as a dairy farmer.

Jack Kowalewski is also a Mountainview junior who has shown market steer and dairy cows at the Harford Fair and elsewhere. In fact, it was a trip to the Wisconsin Diary Expo that prompted him to name his lamb Whiskey. 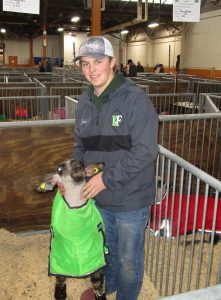 This was his first time participating in the Farm Show, though he’d attended in the past as a spectator and to support his brothers, who had to go home on Sunday but were scheduled to return on Tuesday. Pushing a lamb to the Winner’s Circle, Jack related, requires rigorous training and keeping it moving.

“Just like humans, lambs need proper exercise to grow muscle and improve their show look,” he explained. Though Jack is as of yet unsure what he will do after high school, he suggested that finding a way to combine a trade with ag production would be a good fit for him.

Experienced livestock handler Claire Getz, another Mountainview student, also showed a lamb at the Farm Show. Interested readers can look to next week’s Susquehanna County Independent to learn how these youths fared at the auction.