Giving is a Gas for Local Industry Leaders 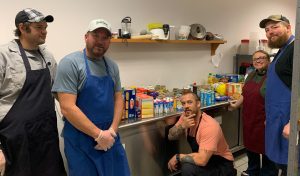 (originally published in Impact by the Wyoming County Chamber of Commerce)

The 2021 season of giving was in full swing, and many in the natural gas business were focused on a variety of initiatives for families in need in our area. Giving projects ranged from purchasing toys for economically-disadvantaged children to pairing up with other companies and organizations to help make the holidays a bit merrier for those who could use a boost.

Williams Companies has offices locally in both Wyoming and Bradford counties, and employees at each have come up with different ways to support their communities.

At their Tunkhannock offices, they once again pulled name tags off the Giving Tree in the main lobby and purchased gifts for 75 children whose names were provided to them by Children’s Service Center. Additionally, employees were conducting a sock drive at the Tunkhannock office, according to Tammy Bonnice of Williams. The socks were given to the Area Agency of the Aging to hand out to their clients during Meals on Wheels food distributions.

In Wysox, Williams teamed up with Proconex to purchase gifts for local families chosen by Bradford County Children & Youth Services. Williams was also a key sponsor this year of Christmas in Montrose, and Bonnice volunteered to put on a Grinch costume and stroll the streets to the delight of children and their parents. 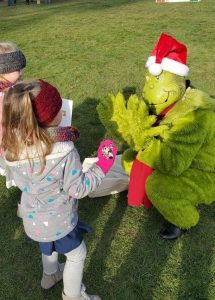 “For the last nine years or more, we have been supporting many organizations in giving for the holiday season. Our employees are always so willing and excited for this time of the year,” Bonnice remarked. “They love finding tags on the tree that maybe match their children’s ages, or they feel some connection to buy for that child.” That Christmas spirit spread to the family members of Williams employees too, she added. “One girl takes about seven tags for her mom and her sisters to fill out.”

SWN employees decided to switch gears this year from donating winter apparel to team up with the Tunkhannock Police Athletic League and donate toys to their Tunkhannock Christmas Cops Toy Drive.

According to Wyoming County chief detective David Ide, the Athletic League has been conducting the toy drive for more than 20 years and reaches out to at least 50 families and as many as 100 children in Wyoming County per year. Unlike other giving programs that rely on an agency or social service to provide names for them, recipients are citizens with whom the police have come into contact for a variety of reasons throughout the year, whether it be crime or the loss of a parent or even an entire home to fire or flood.

“It has nothing to do with income. It’s just people who are down on their luck,” Ide explained. “We can’t replace what they lost, but we can try to make the Christmas season a little nicer for them.”

Law enforcement officers at every level, including State Police, participated in the program and took part in the deliveries. Donations of new, unwrapped toys were accepted at any police barracks in the countyand at Dollar General stores, which have assisted with the Toy Drive for many years.

Additionally, SWN makes monetary contributions to numerous organizations in Wyoming County and beyond to assist them with their respective holiday programs. Local recipients include the Commission on Economic Opportunity in Tunkhannock, the Weinberg Food Bank, and Hunters Sharing the Harvest.

“At SWN, being a good neighbor is how we do business, and we have a long track record of having a positive impact in the communities where we work and live,” said Narcavage. “Giving back and volunteering are part of our culture and business strategy. We’re proud to work with local organizations, especially around the holidays, to make things a little brighter for everyone in our community.”

For ten years now, Coterra Energy (formerly Cabot Oil & Gas) has enjoyed the support of numerous gas industry partners for their annual Holiday Toy Drive drive for the Interfaith agencies in Wyoming and Susquehanna counties. Participants were excited to be gathering once again in person to shop at Walmart in Tunkhannock on Dec. 14. When all was said and done, they had purchased toys, apparel and other small gifts for more than 1,200 children in both counties.

Coterra’s external affairs specialist Bonnie Morris collaborated with Susquehanna County Interfaith director Cindy Beeman and Mary Foley at Interfaith Friends of Wyoming County to coordinate gift shopping for eligible families. As representatives from the participating companies arrived at Walmart, they were given tags detailing items requested by children and off they went into the store with big smiles on their faces, returning to the registers with carts overflowing like Santa’s sleigh. 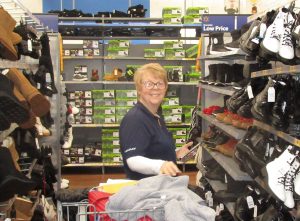 Interfaith receives support from many companies and individuals over the course of the year and especially during the holidays, including SWN, but Coterra’s shopping trip was a crucial phase. “We try to make sure that everybody in the family gets the same amount of gifts,” Beeman (above) explained. “This trip helps us to balance things out. These are things that haven’t been purchased yet and are still needed.”

Coterra employees got into the holiday spirit too, loading the gift bags into waiting trucks before taking them back to their headquarters in Dimock, where other employees helped to sort, wrap and tag them before they were delivered to Interfaith’s offices.

Interfaith Friends director Mary Foley expressed gratitude for a delivery of gifts from Coterra staff the day after the shopping trip. They were sorted quickly and added to gifts purchased by other groups and individuals as part of the agency’s Giving Tree program that were then distributed to clients on Dec. 16. “We are very fortunate to have so much support from the community,” Foley stated.

“Giving back to the community is at the heart of everything we do at Coterra. However, at the Holidays, giving back means even more. With everything this year has dealt us, we wanted to ensure our neighbors had a merry and bright Christmas by matching those who wished to help with those in need this season,” said Coterra Energy director of external affairs George Stark. “We are privileged to partner with Interfaith on this toy drive and are most appreciative for the generosity of the Coterra and GDS employees and natural gas partners who help make this event a success year after year.”

Newer to the area is BKV Operations, but they’ve wasted no time in getting involved with local organizations and making their own philanthropic footprint on the region. For several years now, employees have conducted a gift drive for St. Joseph’s Children Center that BKV matches financially.

“Here at BKV, we are driven to be a force of good for society. We actively support and invest in the communities where we operate,” said Betsy Sayre, office manager and production analyst at the company’s Tunkhannock headquarters. “Although our team in Pennsylvania is relatively small (~20 employees), we do our best to contribute both our time and resources to our communities.”

This year, BKV supported the Christmas in Montrose Jingle Bell 5K and provided food donations to Seven Loaves Soup Kitchen in Tunkhannock. Employees also volunteer once per month at Seven Loaves to prepare and serve meals. 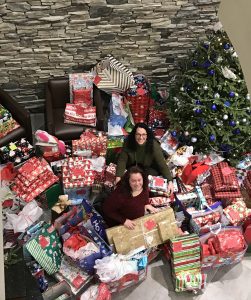 Rachel Paulin (foreground) and Tammy Bonnice of Williams Companies are adrift in a sea of gifts purchased for local children as part their annual Giving Tree campaign. 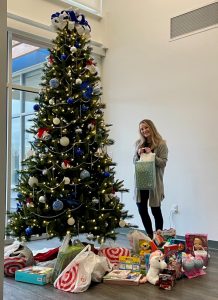 Avenlea Bixby of BKV displays just a portion of the gifts purchased by BKV employees for St. Joseph’s Children Center. 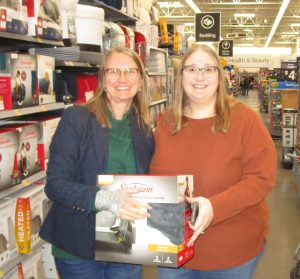 Wyoming County Chamber of Commerce president Gina Suydam and Natalie Clarke of Coterra scour the aisles of Walmart in Tunkhannock for gifts for local children as part of Coterra’s annual Toy Drive for Interfaith. 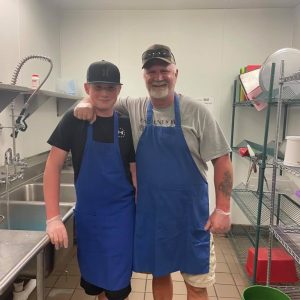