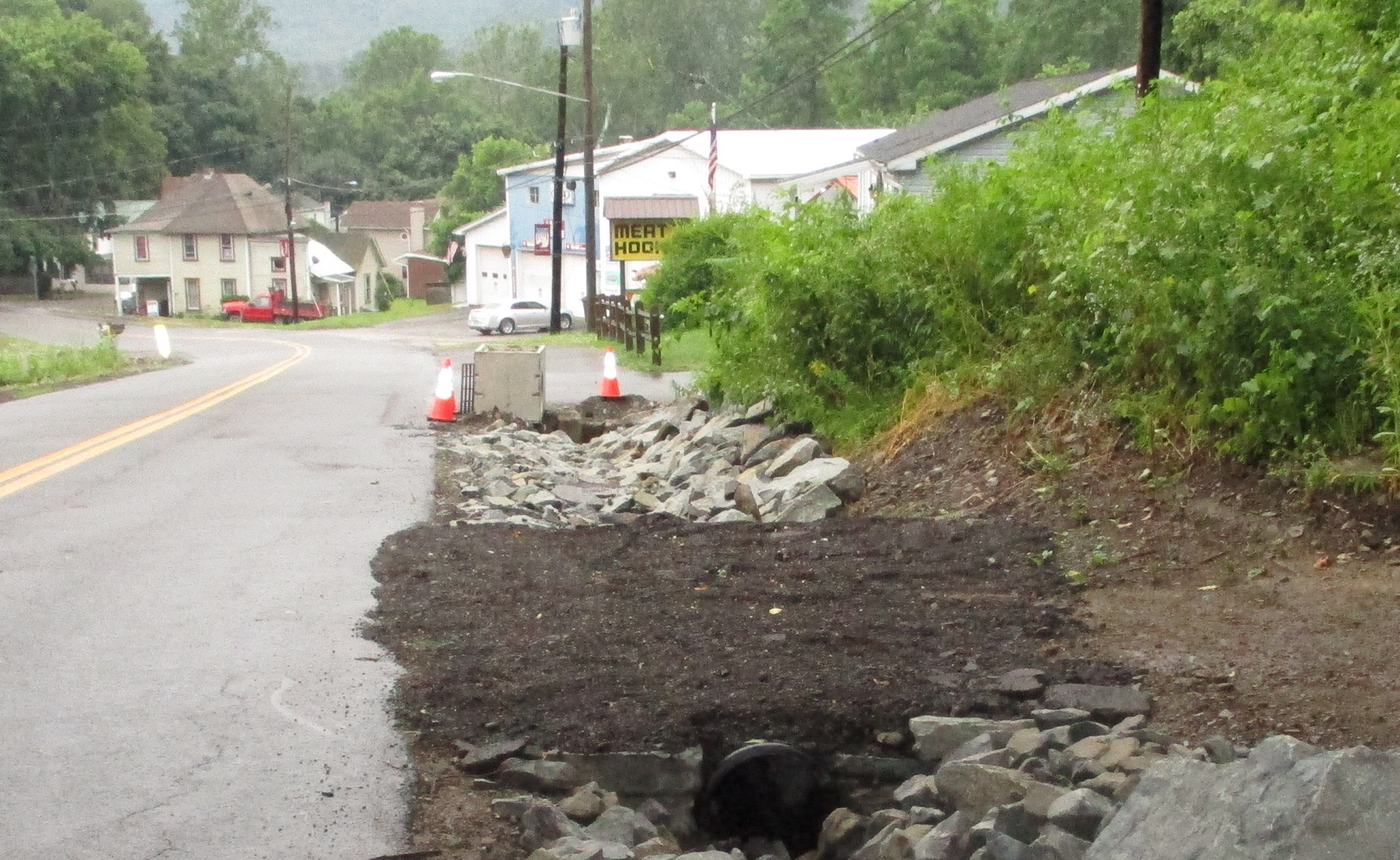 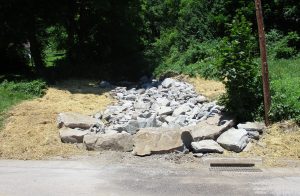 A box culvert is expected to be installed next week to complete flood repairs at the west end of Laceyville (top) and, hopefully, reduce runoff issues in that part of town. Heavy stone placed in a washout area along the eastern end of Main Street (above), however, does not address the underlying issue of large drains from the upper part of two feeding into successively smaller pipes, the solution for which will require adequate funding and digging up the street.

Two key topics dominated the July 2 meeting of the Laceyville Borough Council: flooding issues and the lack of police coverage. Both were cited as undermining the peaceful lifestyles to which residents had once enjoyed, and the solutions for neither are within easy reach. The borough’s police force was disbanded as the new year started in an effort to set aside some money to match potential grants for flood mitigation. The amount saved, council members admitted, comes nowhere close to that which is needed, while crime in the community appears to be on the rise. 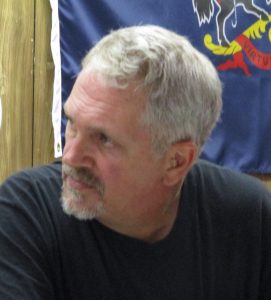 “This place is turning into the ‘wild, wild west,’” said borough council president Randy Brigham (above). “The state police will respond, but we need to call them. What we need is a presence in town.”

“We need to make a decision as to how to better protect this borough,” council member Henry Laboranti concurred. Relying on state police coverage is not enough, he added. 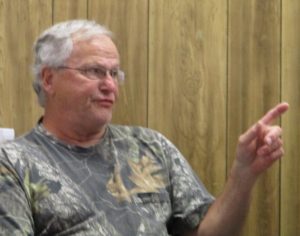 Both Brigham and mayor Phil Brewer (above) have reached out to county officials in an effort to see what options are available. Brewer had set up a meeting with county detective David Ide, but it was canceled, leaving the mayor to suggest looking elsewhere. “I’d rather discuss the issue with someone who is willing to discuss it,” he remarked.

Brewer has interviewed dozens of police officers for the borough in his career as mayor and related that there was only one (unnamed) through the years that gave him a sense of trust. Citing health reasons, Brewer made it clear that he would resign if the council pursued a reorganization of the police department. “It’s too much stress,” he asserted. 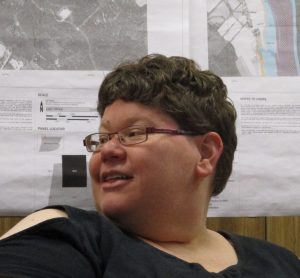 Council member Kristi Fassett (above) agreed that calling around to different municipalities to find out what kind of coverage they have would be the best solution. Business owner Anthony Bluhm asked if council had conferred yet with Meshoppen to see if they might be interested in expanding their coverage area.

Brewer responded that, with four municipalities to cover already, the Meshoppen police force was an unlikely solution unless they were to add a third officer.

“If we can’t contract with somebody, we’re going to have to hire somebody,” Laboranti insisted, citing numerous calls from concerned residents about public drunkenness and other suspicious activity. 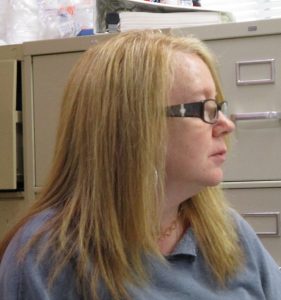 Bluhm had attended the meeting primarily to provide an update on the runoff issues that he has been experiencing at his convenience store and gas station on Route 6. For the past two years, he has battled water coming off the hill behind his store by adding additional drainage ditches and roof gutters. He is also in the habit of stacking sand bags at the rear of the building three feet high that have been overwhelmed.

On June 18, when an approximated five and a half inches of rain fell on the borough, Bluhm was out of town. His employees were underequipped to deal with the deluge, and the store suffered its worst flooding to date. After the first five-day stretch in nearly a years without precipitation, he noted, water is still running around his business. “I’m so tired of throwing things at it and having to clean it up,” said Bluhm.

(it was not lost on anybody that yet another heavy downpour beat down on the modular unit that serves as the borough office while the issue was being discussed.)

“Something has changed,” Brigham stated. “Our borough is being beat up by the weather.”

Additionally, most council members feel that the water table in the vicinity has risen or shifted in recent years. “Part of what you are dealing with is water migrating through the rock ledges,” Brigham suggested. Brewer too noted that springs on his property have been running nonstop for two years. The water coming down the hill is literally washing the town out from underneath, they maintained.

Prior to June 18, Brigham had spent months with FEMA and PEMA officials visiting the area to compile reports on the damage experienced during heavy storms on Aug. 14, 2018. Just when it seemed that the hours and days of walking culverts and conferring with PennDOT and Braintrim Township representatives had resulted in a workable plan that would receive financial backing, the borough was flooded again – perhaps to the greatest degree yet.

The toll the storms have taken on the town is evident, noted Brigham, who had trouble keeping his emotions in check as he described visits and phone calls from county and state officials as “empty promises.”

The only assistance Laceyville has received to date, he related, came from neighboring Braintrim and Windham townships in the form of heavy equipment and labor that the borough cannot afford. In lieu of additional help, Brigham has put many hours for the borough on his own backhoe. “It’s the only backhoe in town. We have to use it,” he remarked. “But I don’t want us to continue this way.”

While Brigham and the borough secretary and treasurer continue to work with FEMA to secure the funding to complete several approved flood repair projects, council is looking into the purchase of a used dump truck from Windham Township. The 20-year old vehicle has a plow, and a CDL license is not required to drive it. All four council members expressed an interest in looking at the truck at their earliest convenience.

While council members could joke a little that, with so much water around they might as well sell it, they are taking a serious look at the possibilities. Borough water supervisor Jay Butler reported that the time has come to submit new water samples for the borough’s second well, which is currently on “reserve status.” This would allow for a blending of the water from two wells, which he suggests would average out the highs and lows of manganese and other trace metals common to water supplies.

On another note, he was contacted by the fire company and asked if their tankers could be filled with borough water, as drafted pond water is taking a toll on valves that have all been recently replaced. Fire company officials had asked if they could get a break on the borough’s water rate of one cent per gallon. “They are part of our community, and they serve our community,” Butler maintained. “There is no reason that they shouldn’t get a break.”

Council agreed and approved Butler’s plan of allowing the withdrawal from a hydrant at the lowest point in town where the pressure would be the highest and the fewest homes would be affected by the temporary draw down. 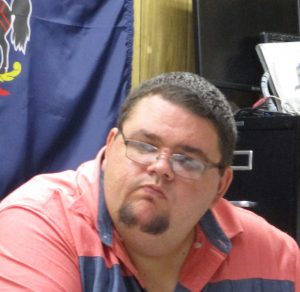 With that matter out of the way, Butler reported that he has also been approached by representatives of companies related to the gas industry, asking if they might fill an occasional tanker on an as-needed basis for small projects. Laboranti (above) was the first to express reservations about the idea, noting that he was “definitely in support of the fire company to use water.”

Brigham upped the ante a bit by not only suggesting that the borough could make some much-needed money by selling water while also submitting a personal request for the delivery of 13,000 gallons of water for a new swimming pool. He offered to pay twice the normal rate and proposed that the accommodation of his order could serve as an experiment as to how much of an effect an occasional large withdrawal has on the system.

Council approved Brigham’s request at the rate of two cents per gallon.

Prior to Bluhm’s departure, Brigham thanked him for his attendance and suggested that council welcomes public participation in the monthly meetings. “When we have people from the borough come in here, we can explain it back and forth,” said Brigham.

“We have a hell of a council,” Laboranti remarked. “Come and hear what we’re doing for people. If you have something to say and don’t reach out to us, it’s not going to be handled by the governor or a commissioner.”