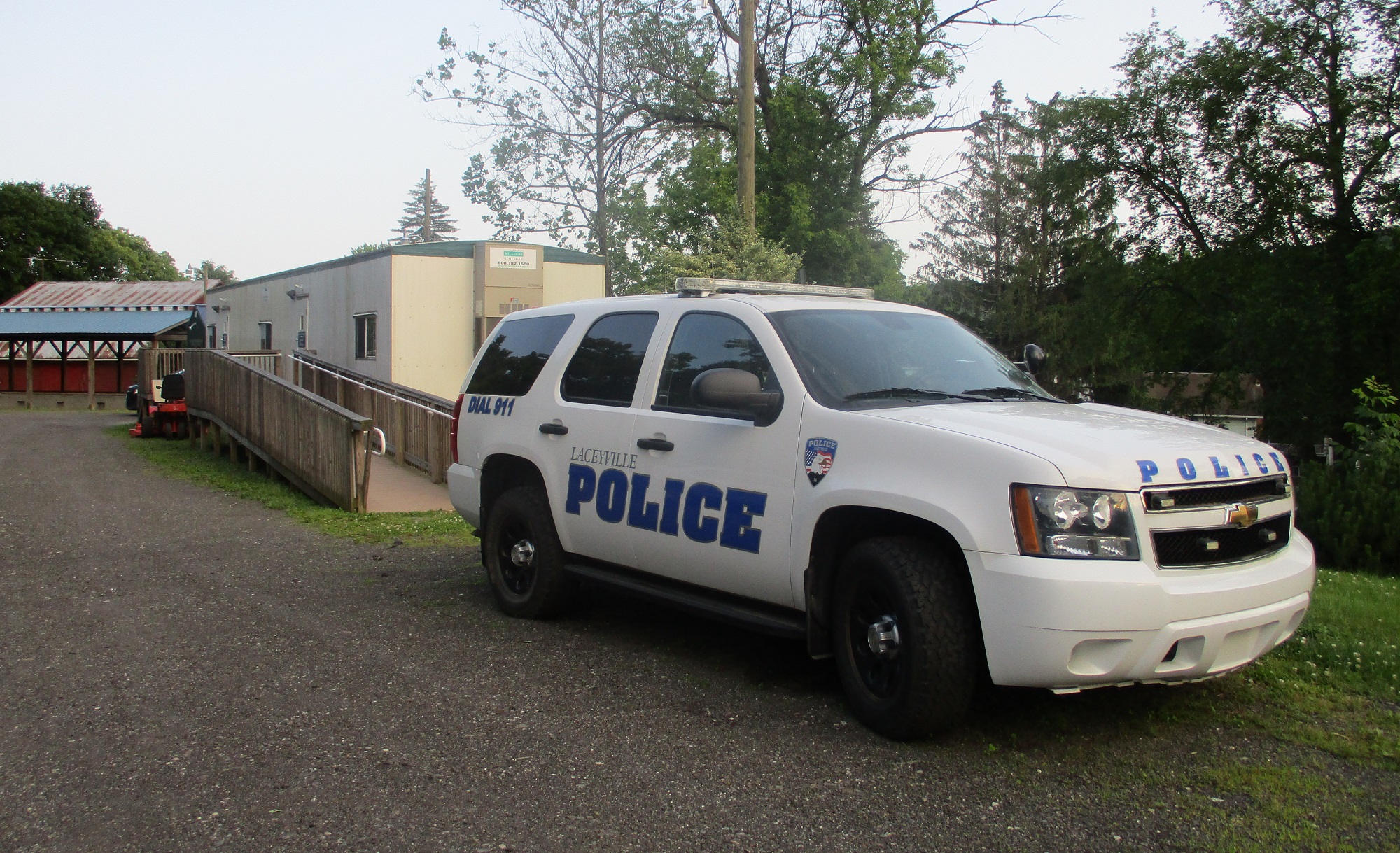 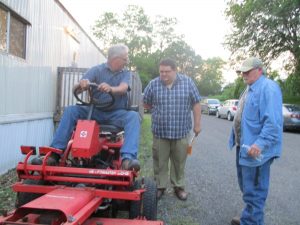 Though there was no discussion specific to bringing back the Laceyville Police Department at the June 5 meeting, council members expressed concerns about suspicious activity in the borough and how to best utilize the police cruiser that was put into service in 2018. Laceyville council chair Randy Brigham (above, left) fires up the borough’s new mower for council member Henry Laboranti and water supervisor Jaye Butler (right), who will also be using the recently purchased machine. Though the handling takes some getting used to, Brigham noted, he is happy with its overall performance.

Laceyville mayor Phil Brewer started off the Tuesday evening meeting of the Laceyville borough council with a report that the battery in the police cruiser is dead. There has been an effort since the police department was disbanded in January to keep the car running, and now council is mulling how best to do that.

“If there’s a way to cover the word ‘Police’ on it, I can’t see a reason that we can’t use it as a soft maintenance vehicle,” council member Henry Laboranti suggested.

Brewer said that he would prefer to see the vehicle used as a decoy to deter speeding on Main Street.

Council member Mary Robinson questioned the legality of the practice, which council chair Randy Brigham said that he believes is OK, so long as the property owner where it is parked has no objections. Brewer offered to talk with someone in the Tunkhannock Police Department to get a better idea of what can and cannot be done with the cruiser.

Council member Kristi Fassett reminded council that there had been previous talk about having one or two people from the borough meet with the county district attorney to discuss the lack of police coverage. Warm weather seems to have brought some unsavory characters out of the shadows, and more than a few people have noticed unknown vehicles traversing habitual routes through town.

Brigham confessed that he is not an expert at identifying people under the influence of drugs, but he has seen a few people recently whom he strongly suspects of such. People were seen carrying cases of beer to the river on Memorial day, despite posting against any alcohol in the area. There are also people who seem to be staying in campers near the old mill. “There’s quite a few people living down there,” said Brigham, who added that someone was also recently seen climbing utility poles along the railroad tracks and removing the old glass and ceramic insulators.

Robinson concurred that there have been some unusual occurrences. Photos of a red van with a blue front were posted on the Laceyville Community Watch page on Facebook, and the same vehicle has been seen on private property in the Forkston area.

It was also noted that the window of the entrance to the borough office was found shattered, though nobody could determine whether or not it was deliberate, as there was no projectile found inside.

Brigham has been meeting with FEMA officials to get details on what flood repairs from last year the government might cover. Some projects have already been started, but the contractors that began the work have not yet completed it. Despite an extension of the deadline from FEMA to Aug. 18, Brigham is concerned that the jobs will not be done in time to be eligible for state and federal funds.

The time spent with FEMA officials has been tedious, Brigham noted, and he is still waiting for specs on several projects so he can go over them with borough secretary Gloria Milliron to get bids out. Brigham was also granted permission by council to seek another contractor if the current outfit does not pull through in short order. “This is dragging on,” he remarked, noting that there have been two excessive rain events in the past month, which only makes the situation worse.

Additionally, the road to the reservoir is in need of repair, especially before winter returns. There are several dead ash trees hanging over the access, and the pitch of the roadway is deemed dangerous. Borough water supervisor Jaye Butler has been using the road without complaint but agreed that he would like to see it fixed.

On another note, Brigham related that residents at the west end of town have been receiving notices from PennDOT that the bridge on Main Street over Little Tuscarora Creek will be replaced this summer.

Butler reported that PA DEP wants comprehensive water plans from all municipalities. Agency representatives have also recommended that the borough utilize both of its wells simultaneously to blend the water going into the system and even out trace elements.

“The quicker we can move on this, the better we look in their eyes and the safer we are as a community,” he stated.