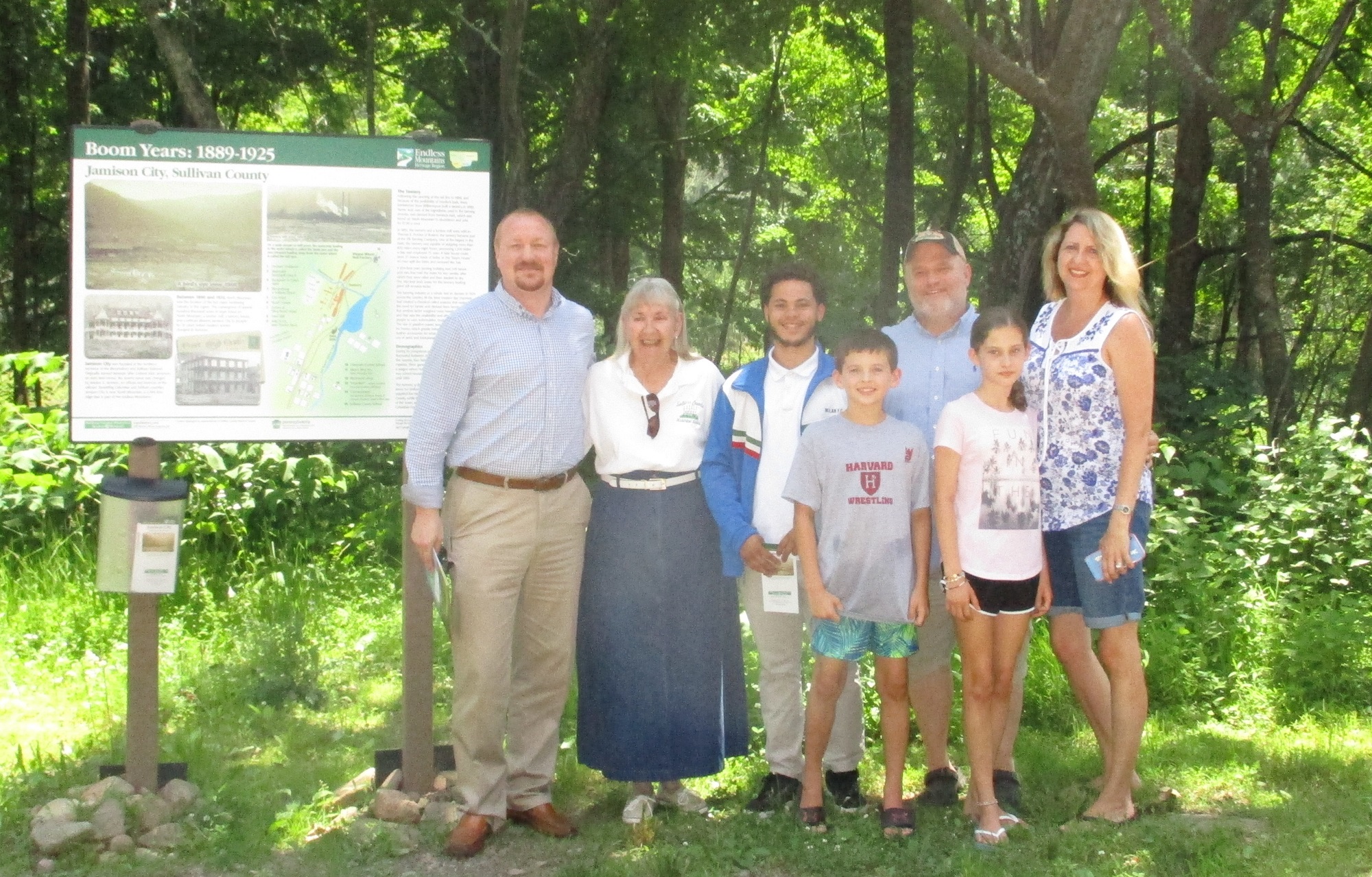 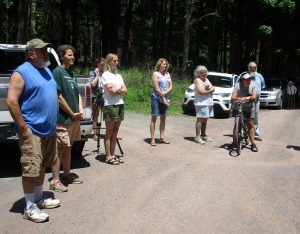 The dedication of an interpretive panel in the village of Jamison City on the border of Sullivan and Columbia counties on June 28 marked the culmination of years of planning by the Sullivan County Historical Society (SCHS) and Endless Mountains Heritage Region (EMHR). Its placement at the former site of the large tannery and lumber mill via which the town flourished a century ago creates a foundation on which programs for veterans, environmentalists, and history students can build.

“Boom to Bust: 1889-1925” tells a tale of discovery, ambition, innovation, settlement, and exploitation. This is the third EMHR sign installed in Sullivan county to celebrate vicinities that are not now what they used to be. It is the remoteness of such once-thriving mountainous enclaves that has ultimately led to the survival of their stories.

“We drove past that Jamison City sign so many times without realizing what was here,” said Tom O’Keefe, who moved five years ago from New Jersey to this sleepy hamlet where he can now quietly enjoy the forested mountains from his own front porch. “It’s hard to believe there were once four hotels here.”

“This particular marker at Jamison City is a great addition to our roster of interpretive signs illustrating what life was like working the railroads, lumber mills and tanneries,” EMHR executive director Cain Chamberlin related. “These booming industries contributed to what was considered a high population – 350 to 500 at the time – for a small town in rural Pennsylvania.”

Jamison City and the neighboring village of Central are, in fact, central to almost nothing – 34 miles from Wilkes-Barre, 40 miles from Williamsport, and 30 miles from Bloomsburg. It is at the very southwest corner of the Endless Mountains region, to which it now owes most of its recognition and potential fame.

But the deep ravines between Central, North and Red Rock mountains were blanketed by Hemlock trees and a variety of hardwoods 130 years ago, and the owners of the Bloomsburg & Sullivan Railroad Company saw the enormous potential in both logging and the extraction of hemlock bark, from which tannic acid was derived. What became a mecca for laborers accustomed to extreme hardship also epitomized the greed of American entrepreneurs.

A year after the rail line opened in 1888, businessmen from Williamsport opened the tannery which, at its peak, was capable of processing 1,200 cow hides per day for leather goods. The tannery and its primarily German immigrant workforce were situated in the Sullivan County side of town, while the lumber mills, Italian immigrant workers and most of the downtown businesses were in Columbia County. The population peaked at around 500 prior to 1920.

According to Melanie Norton, president of both the SCHS and EMHR boards, there was a rapid decline in the need for tanneries in the early 1920s. The Elk Tannery closed in 1924. “The timber was exhausted, and the discovery of acetone for tanning rang a death knell on the town’s survival,” said Norton. That and the availability and popularity of automobiles reduced the need for leather tack for horses. The 2010 census notes 134 residents in Jamison City. 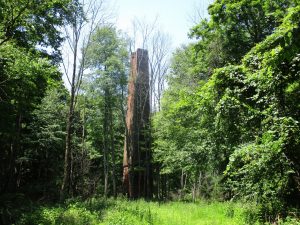 While but one of two huge smokestacks remains in the wooded area between the village and State Games Lands 13, the new sign is just the beginning of marking Jamison City as an important historic site. As its footprint is meticulously rediscovered, project coordinators hope to break new ground by providing lessons from its past.

Front and center among them is property owner Monte Kapec. He and his wife, Emily, purchased 110 acres from the remaining descendants of the Rev. Michael Kapec, who bought the tannery property in 1926. The Kapecs established the Camp at Elk Tannery for veterans suffering from PTSD and other post-military service ailments. In February 2018, their project took on new significance when Monte became executive director of the Vets in the Valley Foundation, facilitating use of the property for hunting, fishing, hiking, nature walks and conservation-based programs geared to good stewardship practices.

Partnering with other organizations, such as the Chesapeake Bay Foundation and the Clean Water Institute, experts on specific topics like conservation and the wide variety of animal and plant life provide a new way of looking at an area that has been replanted and restocked after being decimated by industry.

“It has been amazing to bring in inner-city veterans who have little exposure to rural lands,” noted Monte, who has been with the Department of Army Civilians for 23 years. Citing PTSD case studies documenting the benefits of connecting its victims with nature, Monte feels that adding the interpretive panel to the site brings a new level of awareness that the Kapecs can share with their guests.

“History is a huge ingredient in that,” Kapec said of weaving in lessons learned from misuse of the land by over-timbering and the pollution caused by waste. “We, with the EMHR, can make a difference in helping people.”

Kapec and Norton also see an enormous potential in extending such programs to youths, as has already been done by inviting two students from nearby Red Rock Jobs Corps and their mentors to assist with the installation of the sign. Student Giovanni Viera (below, right) related that learning of the history of both the tannery and the veterans program instilled in him a sense of purpose, while working together as a team provided a sense of pride. 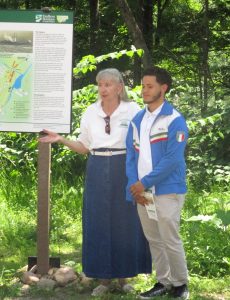 “This is a learning opportunity but also an opportunity for reflection,” said Norton, who is now working to get the 160-foot smokestack listed on the National Register of Historic Places as a standing monument to the history of Pennsylvania.

“The EMHR is thrilled to add another interpretive sign to the region that will provide visitors a glimpse into our rich history and culture,” Chamberlin stated, noting that other examples of EMHR signage can be found in Forksville and at the site of the former town of Ricketts.

The O’Keefes are also happy to have the sign in their village, suggesting that it will add a bit more substance to autumn fall foliage road trips. “It will give people an opportunity to figure out what really happened here.”

Jamison City is most accessible from Route 118 via Central Road, which turns north into the mountains about halfway between Wilkes-Barre and Hughesville. The sign and the smokestack are located at the end of Jamison City Road, which extends from the Central Park Hotel through the center of the village. The approximate GPS coordinates are 41.310294, -76.356750.

In addition to PA Department of Conservation and Natural Resources funds provided by the EMHR, Chief Oil & Gas Corporation helped to support the project. Interested readers can learn more about the EMHR by visiting www.emheritage.org. 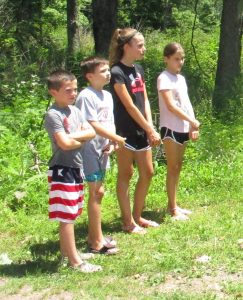