Inclusive Campground Thrives as ‘Community within a Community’ 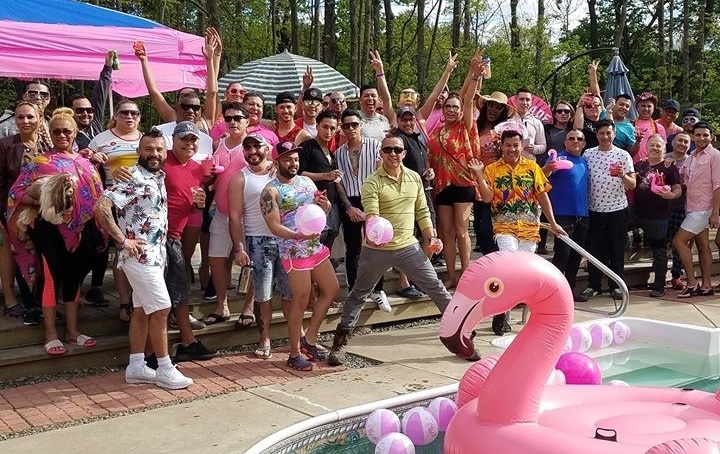 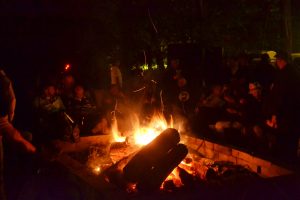 A large crowd (top) gathered at Camp Oneida’s swimming pool on Memorial Day Weekend for the ‘Pink Park.’ Themed events run from April through October. Across America, June is celebrated as ‘Pride Month’ by the LGTB  community and their supporters.

(Also published in the SusquehannaCounty Independent)

According to owners Ron MacIntyre and Tony Boiselle, Camp Oneida near New Milford currently reigns as the longest running campground catering to the LGTB community in America. The site was purchased by John Bickell in 1980. Ron and Tony, from New Jersey and New York, respectively started renting at Oneida seasonally in 2000 and purchased the property in 2004.

The clientele has matured and mellowed over time, which suits the owners and most campers. Though some still visit just for the nightlife and the opportunity to meet like-minded people, many others just enjoy being outdoors and away from their urban settings. 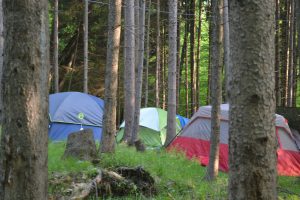 In addition to updating the infrastructure, Ron and Tony added the heated in-ground swimming pool, the cafe, and 15 cabins, each unlike the other and accommodating various amounts of people. There are also two lodges that sleep 18 and nine visitors at a time. Around the one-mile looping dirt road, and along the spurs that abut it, are campsites providing room for tent campers, RVs, and tow-behind campers. 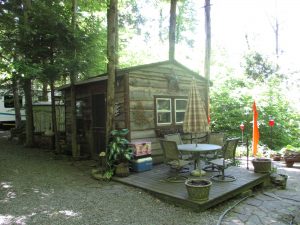 There are groups of cabins and more permanent campers rented on a seasonal basis and other that are tucked away and barely visible. “We have a lot of campers that want a more private situation – something more rustic,” Tony explained. According to Ron, annual income for the camp is equally split between seasonal rentals and weekend visitors. A number of the regulars are Florida residents or retirees who return each year in April and go back south in October.

Seasonal renters are responsible for the upkeep of their own sites, so far as mowing grass, controlling weeds and trimming encroaching undergrowth. But they are also afforded the opportunity to enhance their surroundings with decorations and landscape features. Many sites feature stone walls and walkways, flower gardens and even water fountains.

“We have a lot of creative people here,” said Tony. There are limits, of course, that are based largely on local building codes. Structural elements that might be subject to taxing are not allowed.

Several of the seasonal campsites are rented by residents from as nearby as New Milford. One woman, Ron and Tony related, became an Oneida fan because the camp boasted the only real niteclub in the area, and she and her female friends enjoyed dancing. Before long, she became a camper and regularly invites friends to join her for the weekend.

According to Ron, Camp Oneida is one of few “all inclusive” campgrounds, in that the venue is open to gay men and women, bisexual and transgender persons, and heterosexuals. “As long as you can behave and get along with your neighbors, you’re welcome to be here,” Ron remarked. Patrons are asked to sign a waiver that, in addition to absolving the owners of liability, also addresses the fact that the venue is clothing optional and that photography is permitted in most areas, except the swimming pool.

Brian Warner of Kirkwood, NY, has been a regular at Camp Oneida for the past 16 years. He jokes that, when he started coming, 34 was the average guest age. “Now I’m 47, and I’m one of the younger ones,” he stated. Rob noted that LBGT culture, as a whole, has become more couples-oriented, so the wild times that people once associated with the scene no longer constitutes as much of the spectrum of gay lifestyles. 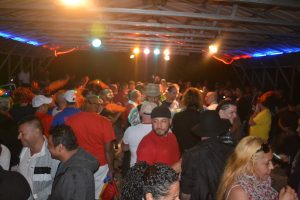 Tony maintains that there are still young campers among the new guests every season, but they tend to be more focused on the weekends, depending on the theme. This past weekend’s Steam Punk theme, for example, drew abundantly on the younger set. Ron suggests that, overall, they may have more options than 20-somethings did in his day or they may not have as much disposable income.

There is a theme or special activity planned for every weekend that the camp is open from April to mid October. “We manage to fit a year’s worth of holidays into six months,” Ron noted. June 14 and 15 is Carnival, when guests will be donning festive costumes and dancing the nights away. A variety show is planned for July 4 weekend that will feature comedians, magicians and drag performances. The Miss Oneida contest is scheduled for July 13. 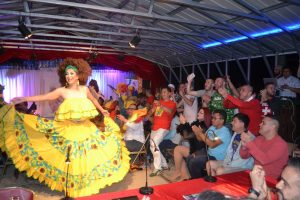 The drag shows are extravagant affairs, and Camp Oneida is home to a competition circuit that it shares with Jackson Heights in the New York borough of Queens. “They spend up to $10,000 on a gown,” Ron related. With their top-notch production and Vegas-like pageantry, the events equally popular with the camp’s straight clientele.

On weekdays and even midday on the weekends, one is more likely to hear birds chirping and the hum of an occasional golf cart buzzing by than the raucous laughter and thumping bass beats of dance music that builds into the evening as private parties and activities around the pool migrate to the club area. Located along East Lake Road, the entrance is marked only with a humble sign bearing the logo of a Native American with a rainbow-hued headdress. 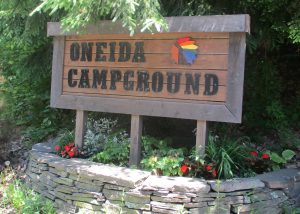 “We try to keep a low profile, in part for the neighbors but also for the privacy of guests,” Tony explained. He and Ron feel that what feel animosities might have been held over from previous management have been smoothed out over time. “We have a lot of allies among the local business owners,” said Tony. “We spend a lot of money, and we send a lot of business to them.” Relationships with the township and the ambulance crew from nearby Columbia Hose Company have also grown stronger.

“We do benefits for the ambulance and fire company every year,” Tony noted, which net at least a thousand dollars annually. The Christmas in July party, this year’s slated for July 19 and 20, features perhaps the earliest toy drive in the area, amassing a sizable contribution for Susquehanna Wyoming County Interfaith.

To get a look at the events schedule and to learn more about rates for camping and day visits, interested readers may log on to www.oneidaresort.com and follow the Oneida Campground & Lodge Facebook page. 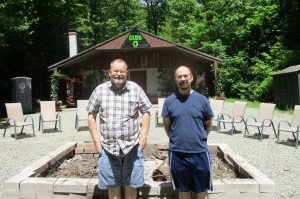 There were no guests in the club and cafe area of Camp Oneida on Saturday afternoon, but owners Ron MacIntyre (left) and Tony Boiselle expected both to be bustling as evening approached. The couple have owned the New Milford Township camp since 2004. 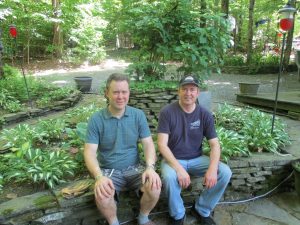 Long-time campers and long-time friends Rob Warner (left) and Brian Tharp have been adding stone features and other decorative elements to their shared campsite for at least the past decade. The two return from New York state and central Pennsylvania, respectively, each year because of the camp’s friendly environment and the natural beauty.