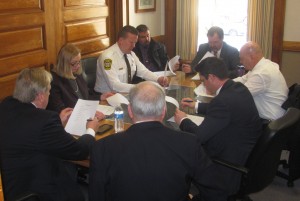 The prison population at the Bradford County Correctional Facility (BCCF) continues to hold at levels higher than what the facility was meant to handle. At a Jan. 8 meeting of the county’s prison board, Warden Don Stewart reported that there are currently 176 men and women in the prison system. Every available space has been maxed out at BCCF for more than a year to accommodate 169 inmates.

“I don’t see that the county’s demands for prison services are going to drop at all,” said District Attorney Dan Barrett, who noted only a slight decrease from 140% to 136% in the number of new criminal cases being filed, using 2005 to 2007 as a baseline.

It was hoped that the Supervised Bail Program initiated in Fall 2013 would alleviate some of the overcrowding at the jail. While the program has been deemed successful in its early stages and is currently keeping 64 convicted low-level criminals out of the prison, any gains are being offset by new cases coming into the courtroom.

Barrett related that he has looked at figures around the region and found that, like Bradford County, neighboring Tioga and Susquehanna counties continue to file a number of new criminal cases well above the state average. The primary trend that Barrett has noticed in the past year is that there are less crimes attributed to gas workers.

“The gas industry has matured, and there are not as many people coming here to seek their fortunes and bringing their problems with them,” Barrett remarked. While many workers who came to the area were already employed by gas companies, there were many others who followed in the industry’s coattails who were not as stable.

“They couldn’t hold a job in Oklahoma, and they couldn’t keep one here either,” he stated.

Concurrently, however, Barrett related that drug-related arrests are up. Of the four reported transfers of criminals from BCCF to Robert Packer Hospital in Sayre over the past month, most of them were due to drug overdoses and chest pains and other reactions to drugs, including bath salts.

“When they came in, they were hopped up on drugs,” Stewart explained, adding that prison personnel is left dealing with both the physical and mental issues that result from drug use and withdrawal.

During the regular meeting of the Bradford County Commissioners held prior to that of the Prison Board, It was announced that the Supervised Bail Program had been moved to a former daycare facility next to BCCF on Route 6. At the Prison Board Meeting, it was noted that DUI Coordinator Jake Zagozewski had also been moved to the old daycare building on Jan. 2.

“It has freed up more space in the jail for what we need to do,” said Stewart.

In a perfunctory move, the board members voted unanimously to retain Sheriff Walters and Commissioner McLinko as chair and co-chair of the prison board. The commissioners had earlier approved the 2015 schedule for Prison Board Meetings. The board will meet on the second Thursday of each month, usually at the courthouse in Towanda and occasionally at the correctional facility in Burlington Township. The next meeting will be Feb. 12.