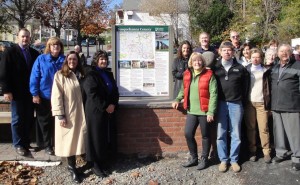 Nearly 50 people gathered on Main Street in Forest City on Nov. 1 for the unveiling of two new signs and a celebration of the partnership that turned a routine project into a big deal for a little town at the edge of the Endless Mountains. The project is the result of months of planning by several entities with related missions.

With funding assistance from the Susquehanna County Room Tax Committee and Endless Mountains Visitors Bureau (EMVB) and PA DCNR, the Endless Mountains Heritage Region (EMHR) developed the Susquehanna County Attractions sign. Forest City Borough and the PA Rail-Trail Council were key partners. The Greater Forest City Business Alliance (GFCBA) developed and produced a separate sign panel for the reverse side. The two signs were installed in the parking lot across from Zazzerra’s Supermarket.

The Susquehanna County Heritage Attractions sign that faces Main Street is the third of its kind produced by the EMHR, which plans to expand the effort into other Heritage Region historic downtowns and Sullivan County. EMHR has placed similar signs in Bradford and Wyoming counties in Towanda and Tunkhannock, respectively. Each features a map and legend with details about dozens of museums, parks, scenic byways and trails, and parks in the respective counties.

The Greater Forest City Business Alliance and PA Rail-Trails Council worked together to produce and fund the production of a sign that highlights the business districts of Forest City and nearby Vandling and Browndale. It is an updated version of one placed last year at the D&H Rail Trail head, the trail being featured on both signs.

Forest City serves as a gateway to Susquehanna County from Lackawanna and Wayne counties and is also a major trail head for the D&H Rail-Trail, a 38-mile hiking and biking trail that stretches from Simpson in Lackawanna County to the New York border above Lanesboro in Susquehanna County. Conrad noted that the Rail-Trail Council is working toward having Forest City designated as its first official “Trail Town.”

EMHR often works in partnership with local and regional organizations to develop projects that strengthen communities. But the project in Forest City evolved into a solid collaboration between more parties than usual and exceeded initial expectations.

“Our historic Main Streets are among our greatest heritage assets,” EMHR executive director Annette Schultz remarked. “EMHR is thrilled to contribute to the efforts of Forest City Borough, the GFCBA and the PA Rail-Trail Council to draw D&H Rail Trail users to downtown businesses. The is part of a region-wide effort to highlight and benefit from the heritage and outdoor recreation sites that draw people – residents and visitors – to our historic small towns.”

Sen. Baker extolled the value of cooperation, especially in small town Pennsylvania. Fritz remarked that the unique collaboration between nonprofit and business organizations, municipalities and state agencies was refreshing in the face of a divisive election year.

“When we all work together, we can accomplish amazing things,” Fritz stated.

Several people in attendance expressed an interest in obtaining replicas of the sign, and Schultz related that orders will be solicited soon for a bulk order. Replicas can also be produced as vinyl or fabric banners that can be used as backdrops at special events. For more information, contact EMHR at 570-265-1528 or hrobinson@emheritage.org. 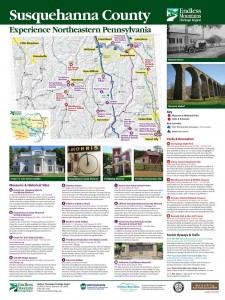