The annual meeting of the Endless Mountains Heritage Region was held on Oct. 7 at the Montrose Bible Conference in Montrose. Speakers included Partnership/Mini-Grant awardees and representatives from Relevant Strategies & Solutions who guided the development of the EMHR’s updated Management Action Plan. EMHR executive director Cain Chamberlin highlighted successes of the past year while also providing details about upcoming events to celebrate the organization’s 25th anniversary in 2023.

“We were thrilled to see such a great turnout of more than 50 people at our annual meeting,” Chamberlin related. “Attendees seemed to really resonate with what we’ve accomplished over the last year and what we have in store for our 25th anniversary. We truly appreciate all of the support from our members, county commissioners, volunteers and board of directors.”

Commissioners in attendance include Donna Iannone from Sullivan County, Ernie King from Wyoming County, and Betsy Arnold and Judy Herschel from Susquehanna County. Chamberlin thanked outgoing board members Erica Rogler and John Krakoski – each of whom had reached their term limits – for their years of service to the organization. He also thanked outgoing board president, EMHR co-founder and at-large member, Kevin Abrams of the Northern Tier Regional Planning & Development Commission (NTRPDC), who retired from his post in September after nearly three decades of service.

Chamberlin presented Rogler and Krakoski with a framed collage of photos representing “a view of the Endless Mountains” from all four counties of the region. Abrams was presented with a similar collage and a plaque honoring his years of service at his recent retirement dinner.

The EMHR welcomed returning member Lynnelle Farber and new members Candy Williams and Amy Benjamin to fill the vacant board seats. Farber is the Wyoming County planning director, Williams is the executive director of the Sullivan County Chamber of Commerce, and Benjamin is the fiscal manager for the NTRPDC. All members in attendance voted unanimously to accept the slate of new officers as presented by the EMHR nominating committee as follows: Chris Desrochers – president; Dave Palmer – vice president; and Amy Benjamin – secretary/treasurer.

According to Chamberlin, the EMHR has enjoyed a surge of followers on social media, especially for its Facebook page. Nearly 800 people subscribe to its e-newsletter, and general membership to the EMHR has grown from six in 2018 to 186 in 2022. Membership is currently still free. There was also a major staff change this year as Vanessa Billings-Seiler stepped down from the administrative assistant position. Chamberlin cited Billings-Seiler as critical to his and the EMHR’s success over the past five years and welcomed Savannah Schools as the new administrative assistant.

The EMHR conducted numerous recreational and educational events over the past year, but the initiative that drew the most attention in 2022 was the new Endless Mountain Gravel Bikepacking Loop, a project three years in the making, spearheaded by Commissioner Iannone. The Endless Mountains Visitors Bureau, Bradford County Tourism Promotion Agency, NTRPDC and the planning directors of all four counties were involved in the project.

Approximately 410 miles of contiguous roadways and existing trails like the D&H Rail-Trail in Susquehanna County have been mapped out to take cyclists to all corners of the Heritage Region and provide scenic vistas and access to downtown businesses. Dandy Mini Marts was acknowledged as the first Endless Mountains Bike-Friendly Business Program member for providing “repair stations” at its locations in North Towanda, Mehoopany and Mildred. 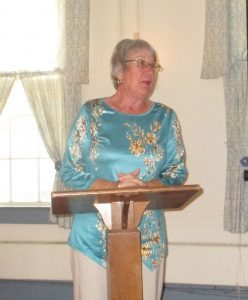 Project partners – a term shared by recipients of EMHR/DCNR grants – took turns at the podium to provide summaries of progress on initiatives for which the EMHR provided funding this past year. Among them were Wyalusing mayor Suky Burgess (above), who detailed the development of Creekside Park along Wyalusing Creek in the borough; Mary Blondy of the Loyalsock Foundation, who exhibited artists’ renderings of the future The Summit: Center For Wellness on 71 acres adjacent to the Sullivan County School District; Marty Kane (below) from Friends of Salt Springs Park, who showed photos of major renovations to parking areas and trailheads; Erica Rogler, who spoke of the updates to “Discover Tunkhannock” signage on the greenspace next to the Wyoming County Cultural Center in Tunkhannock; Elaine Poost of the Bradford County Regional Arts Council, who detailed the success of the Young Explorers Program; and Julianne Doyle of the Forest City Area Historical Society, who provided a progress report on the restoration of stained glass windows in the former church that serves as the Society’s museum and headquarters. 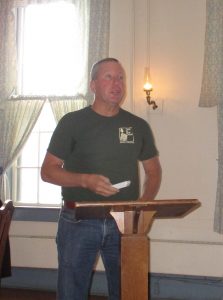 “We thank our parent agency, the DCNR, for providing grant funding that will carry us through another year of great projects and initiatives, such as the implementation of our updated Management Action Plan (MAP),” Chamberlin stated.

The MAP was also several years in the making, as a subcommittee worked with Jill MacCauley and Catherine Grace of Relevant Strategies & Solutions to assess and prioritize short-, medium- and long-term goals for the EMHR. “Our consultants, Jill and Catherine, did an outstanding job as guest speakers and thoroughly informed our meeting attendees about the updating process and how far we have come to get to this point,” Chamberlin remarked. “The MAP will essentially serve as the EMHR’s guiding document for years to come.”

The EMHR was founded in 1998 and has leveraged millions of dollars into the local economy through its support of nonprofit agencies, historical societies and local municipalities, while also dramatically increasing recreational opportunities for citizens of Bradford, Sullivan, Susquehanna, and Wyoming counties. With an eye on the future, the EMHR will celebrate those successful partnerships and its 25th anniversary with a two-day Endless Mountains Outdoor Heritage Expo at the Wyoming County Fairgrounds on Friday and Saturday, Sept. 29 and 30, 2023. Plans are still underway, but all project partners will be invited to participate, as will vendors of outdoor recreational supplies and experiences. The annual meeting will be held on the eve of the Expo, Sept. 28. 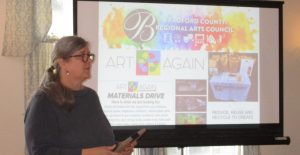 Bradford County Regional Arts Council director Elaine Poost provided details on several programs that fall under the organization’s Young Explorers Program that was funded by the EMHR. Above, 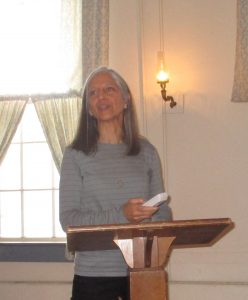 Mary Blondy of the Loyalsock Foundation held the attention of meeting attendees with plans for The Summit: Center For Wellness that will be constructed near the Sullivan County School District. 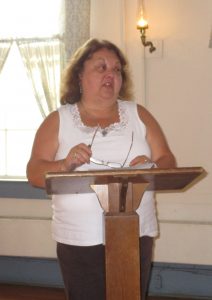 Juliann Doyle, secretary of the Forest City Area Historical Society, showed photos of the stained glass windows at its museum and headquarters that are being restored.