A Monument Garden Has Sprouted in Auburn Center

In: People In the News
With: 2 Comments 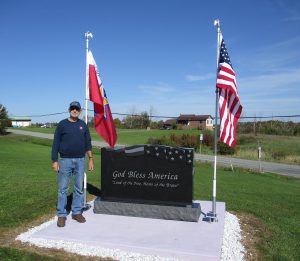 Myron Mokris (above) stands next to the first of three monuments that he has installed on his property since spring. The black marble was imported from India. The three patriotic monuments at the Mykros residence stretch in a straight line from SR 3001 toward the house that Myron built 40 years ago.

Myron and Geraldine (Bullock) Mokris have lived at the intersection of routes 267 and 3001 in Auburn Township for 40 years. Myron built the house there just 10 years into the couple’s marriage on what was once part of his wife’s family’s dairy farm. There is a broad expanse of lawn between the intersection and the house and, about a year ago, Myron got the notion to put something there for the many people traversing the busy country intersection to reflect upon.

Myron is Navy veteran, having served for four years between 1966 and 1970 as a boiler technician on the USS Princeton – a helicopter carrier and hospital ship. He has some interesting stories about his years on the ship to share, including picking up the crew and capsule of the Apollo 10 mission in 1969 and being present for an underground nuclear test at Amchitka Island in Alaska the same year.

His own military service and his involvement with veterans organizations prompted the idea for a monument dedicated to veterans of all five military branches who had lost their lives in conflict and those who continue to serve. He visited Tunkhannock Monument and expressed his plans to owner Eric Kukuchka who helped him settle on a relatively large piece carved from India black stone. “I was looking for something smaller,” Myron recalls. “But he showed me this one with the flag draped over it and I really liked it.”

Kuckuchka also helped Myron determine what would be carved on the stone – the five emblems of the military branches on the side toward Route 267 and “God Bless America, Land of the Free, Home of the Brave” on the reverse side – and they placed the order. Not only was the type of stone harder to come by – literally coming from India – it was ordered during the height of the freight backup that saw fully laden ships stuck at sea for months. The monument finally arrived a little more than a year later, and his friend, Robert Bonavita poured the concrete pad for him. The stone is flanked by a US flag and another banner bearing the phrase “Honor and Remembrance.”

Little did Myron know that he had developed a new hobby. Soon thereafter, he was reading a book about the Statue of Liberty and thought it would be interesting to erect one in his yard. An online search led him to a seven-foot high replica in Arizona, as well as a miniature reproduction of the plaque at the base of the statue in New York Harbor bearing the famous sonnet by Emma Lazarus reading “Bring me your tired, your poor, your huddled masses yearning to breath free…” 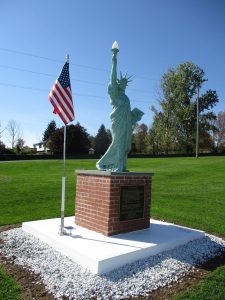 He initially considered placing Lady Liberty up the hill, closer to the house, but opted instead to place it about 40 feet north of the first monument on a red brick pedestal constructed by Bonavita that is topped with a slab of locally-quarried bluestone. He spread white granite chips around the base to complete a red, white and blue theme bolstered by another American flag.

But Myron wasn’t done. The space between the first two installations was calling for yet another creation. This time, Myron chose a sculpture by Richard Young called the Battlefield Cross. The iconic bronze piece, brought in from Utah, includes a helmet with dog tags, supported by a rifle and bayonet, and combat boots. “If they couldn’t take the body with them, this is what they did,” Myron explained. The helmet and tags identify the soldier. The inverted rifle suggests a time for prayer. And the boots signify the final march of a fallen comrade. 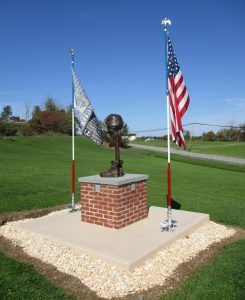 Though most passersby would not notice, Myron explained that the third piece is incomplete as he waits for two more plaques – one to denote the meaning of the sculpture and another bearing the inscription “All Gave Some and Some Gave All,” which currently flies above the statue on a flag that replicates a portion of the Vietnam Veteran’s Memorial Wall. The flags are lit up at night by solar-powered lights installed in the bases.

The three patriotic monuments have caught the attention of many, some of whom stop to take photos, which Myron doesn’t mind. In fact, he is considering paving a few parking spots adjacent to his driveway so that people won’t have to park in the busy road.

“It’s a great spot for them. It gets a lot of traffic,” he remarked. “I want people to think about what they mean, and I hope the kids on the school buses look at them.”