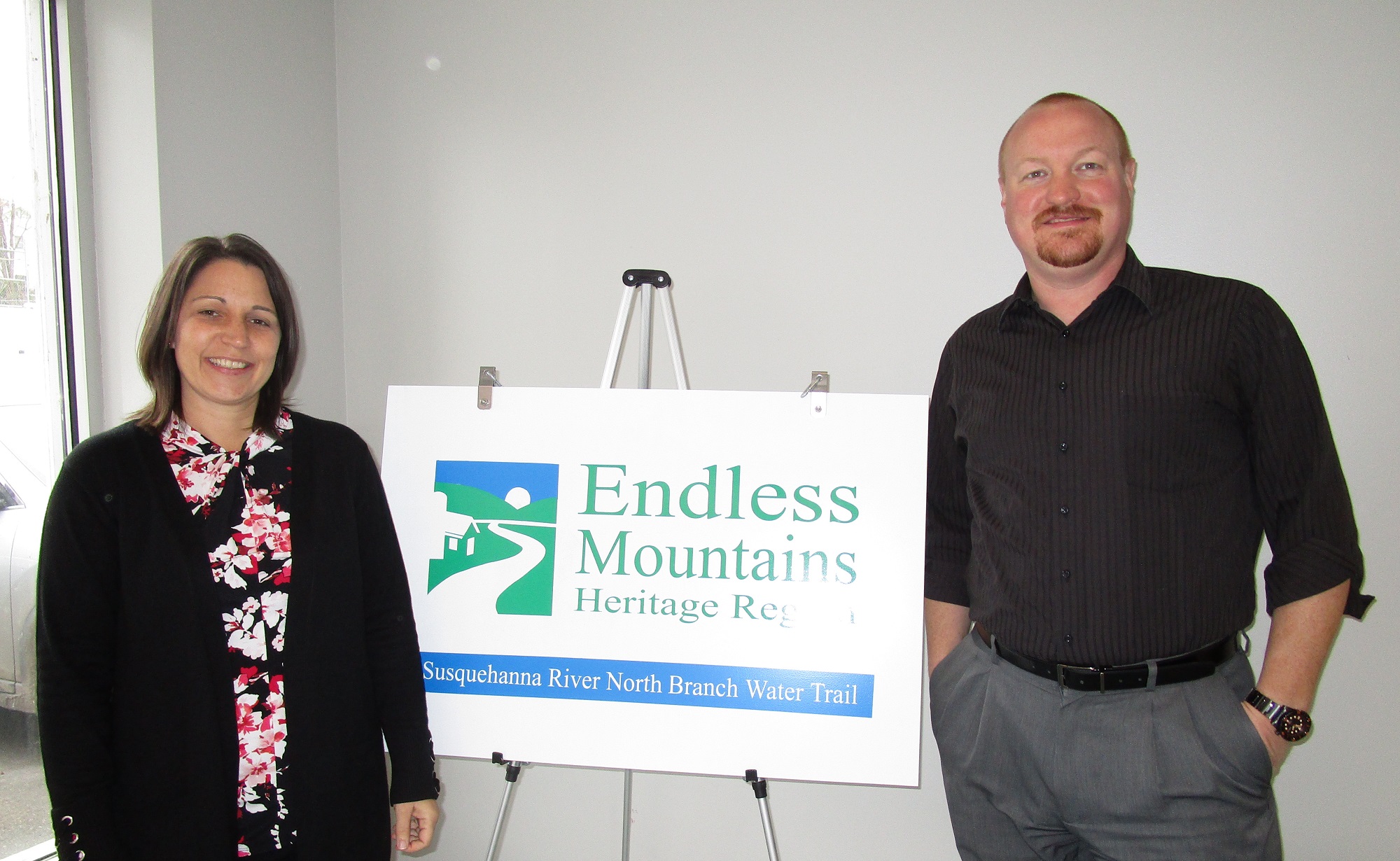 EMHR executive director Cain Chamberlin (right), administrative assistant Vanessa Billings-Seiler (left) and fiscal coordinator David Hindman (not pictured) are gearing up for a busy new year with the organization after receiving one of its largest funding allocations ever from DCNR and other sources in its two decades of operation.

Staff and board members of the Endless Mountains Heritage Region were delighted to learn last week that the organization that serves and promotes heritage assets in Bradford, Sullivan, Susquehanna and Wyoming counties will receive $242,000 in funding from the Department of Conservation and Natural Resources (DCNR).

The amount is one of the highest grant allocations ever received by the EMHR since it was founded in 1998 and is reflective of the organization’s progress over the past two years.

“This grant allocation shows just how hard we’ve worked to put the EMHR back on track and move it forward,” EMHR executive director Cain Chamberlin remarked, adding that he was still amazed at the success of the three-member staff, as they are still relatively new to the application process.

“It’s completely a tribute to the new leadership and the communication that Cain has with his staff and with the board,” Bradford County Tourism Promotion Agency director Robyn Cummings said of DCNR’s increased support. “He has a very clear vision and mission and a measurable action plan of goals to achieve.”

“The team that’s in place now with the Heritage Region seems to really be working well together. They’ve already accomplished a lot of things,” Endless Mountains Visitors Bureau director Jean Ruhf added. “That’s one of the things that DCNR looks at, and they can see that the organization is moving in a positive direction.”

“The DCNR realizes that we can’t do it all on our own, and we need groups like the EMHR to make our work meaningful,” said DCNR regional adviser Christine Dettore. “We are looking forward to working with Cain and are impressed at how he has brought the organization to the forefront and has enhanced membership.”

The EMHR is one of 12 Heritage Areas designated by the DCNR that effectively crisscross the state. The EMHR is overlapped by the PA Route 6 Alliance as well as the Upper North Branch Susquehanna River Trail, which the EMHR manages. The emphasis of each heritage region differs, and the EMHR’s focus is decidedly rural.

“To be the third highest among 12 heritage regions is very rewarding and very fulfilling,” Chamberlin stated. “We were the highest for a rural area.” Comparatively, the two biggest winners in DCNR funding for 2020 were Delaware & Lehigh Heritage Corridor and Schuylkill River Heritage Area, both being nationally recognized organizations that serve much more highly-populated parts of the Commonwealth.

Chamberlin credits EMHR fiscal coordinator David Hindman for getting the numbers “just right” and Seiler for her knowledge and handling of the Water Trail. Hindman has been with the organization for six years, while Seiler joined the team two years ago. Chamberlin took the position of executive director in August 2018.

“Next year, we can really hit the ground running and do everything we set out to do,” Chamberlin said of the EMHR’s potential for 2020. “I’m pretty sure we can accomplish everything in our work plan.”

The money will be used to help the EMHR meet all of the goals outlined in its Round 25 grant application, which covers a wide range of initiatives from printing new waterproof Water Trail maps to conducting a special purpose study through the Pennsylvania Association of Nonprofit Organizations (PANO) to further define the EMHR’s long-term goals and boost membership.

Also on the agenda for 2020, the EMHR will conduct a grant workshop early in the year, coordinate at least two river paddling sojourns and two river clean-ups, place a greater emphasis on the EMHR’s “Living With the Land” theme by working more closely with farm bureaus and conservation districts within the four-county area, and promote cycling initiatives in collaboration with the Route 6 Alliance.

Approximately $70,000 will be set aside for the EMHR’s annual Partnerships/Mini-Grant Program. Applications for heritage projects will be accepted from January through April and information can be found online at www.emheritage.org.

“I’m incredibly proud of this enthusiastic and knowledgeable team and all we’ve accomplished since my time began here. The organization continues to make a positive impact on the four counties that we serve,” said Chamberlin, who expressed his gratitude to DCNR for its support of initiatives in the Endless Mountains Heritage Region.

“Heritage areas are our partners and help us to advance our goals and our missions,” Dettore remarked. “We are excited about helping them to enhance their goals as well. The EMHR is a great area to work, live and play.”