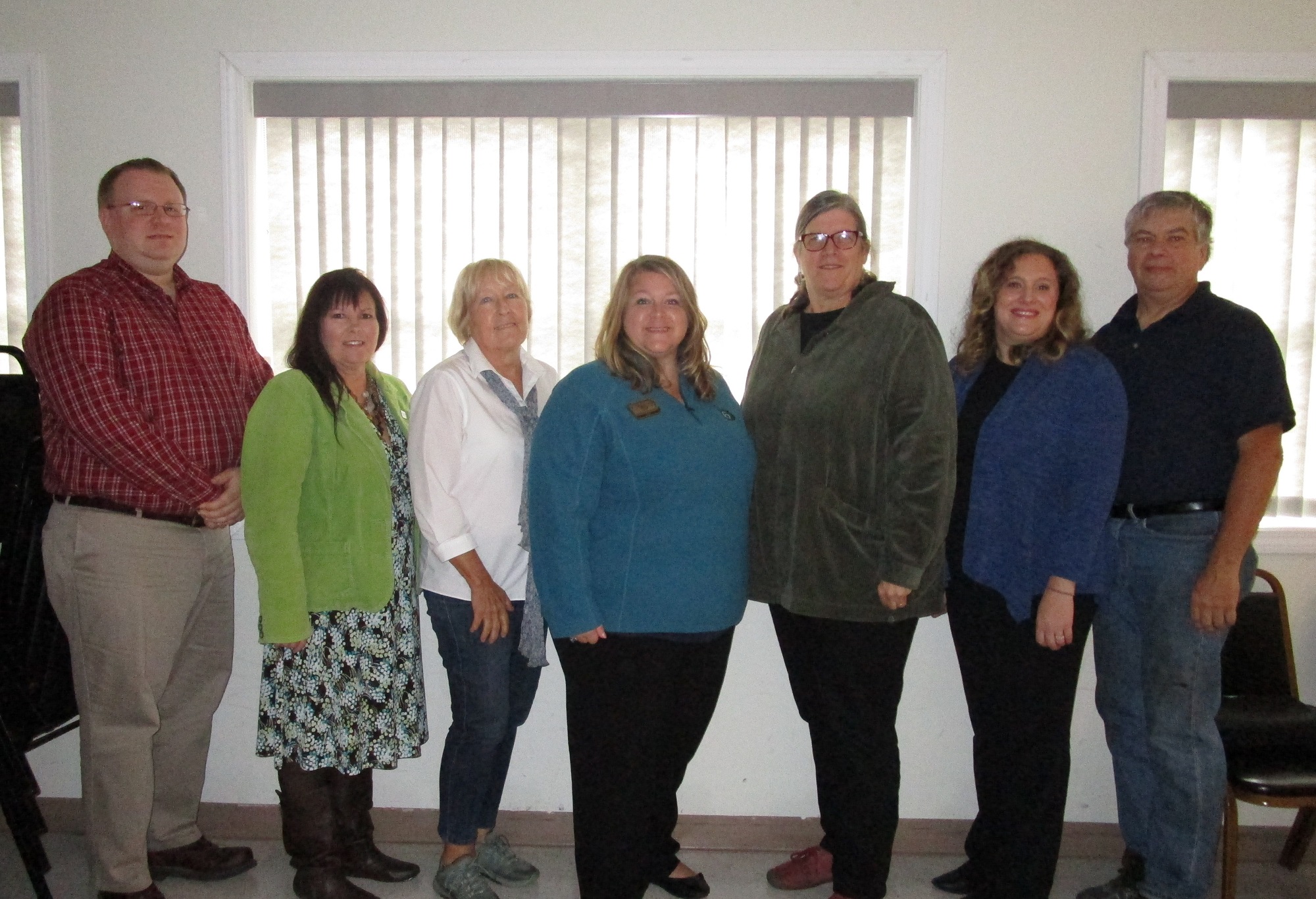 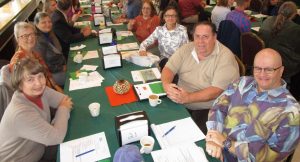 Board members and staff of the Endless Mountains Heritage Region (EMHR) welcomed associate members, project partners and other guests to their annual meeting held on Oct. 4 at American Legion Post 510 in Black Walnut, Laceyville. In addition to recapping a successful year of engaging outreach programs and projects, the board voted in a new roster of officers, took on a new board member and bid farewell to some retiring members.

“All of our goals have been met or are on their way to being met,” said EMHR executive director Cain Chamberlin, who made his debut with the organization a little more than a year ago. Membership to the organization has been increased tenfold, followers of the EMHR Facebook page have more than doubled, and a new website and Instagram page have helped to spread awareness of the EMHR.

Chamberlin thanked two members of the Kitson Arts Alliance in attendance for helping to make the Bradford County Summer Parks series a success by coordinating entertainment. A similar program with an emphasis on recreation will be implemented in Sullivan County next year. Other well-received endeavors in 2019 included the annual Youth Heritage Sojourn and the Rivers of Our Region presentations in Tunkhannock, Montrose and Dushore.

In 2020, Chamberlin (below, center) noted that the EMHR will prepare a special purpose study and meet with farm bureaus in the four-county region. “A lot of our agricultural initiatives had fallen by the wayside,” he remarked, “and we want to get back into that.” 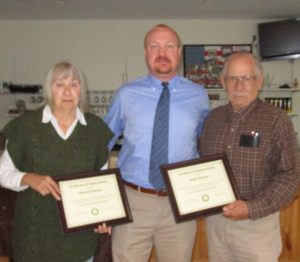 The EMHR said “goodbye” to long-time members Wylie (above, right) and Melanie Norton. Wylie is retiring as a Sullivan County Commissioner, in which capacity he sat on the board for the past decade or longer. His wife, Melanie, serves as the director of the Sullivan County Historical Society and has been the EMHR board president for the past two years. Also stepping away from the board are secretary/treasurer Joyce Kerrick of Bradford County and Kerry Foose of Susquehanna County. David Palmer of Hopbottom was elected to the board to fill Foose’s vacancy.

With the annual business meeting out of the way, representatives of organizations that have benefited from the EMHR’s annual mini-grant program took turns providing updates on what they have accomplished with their respective funding. 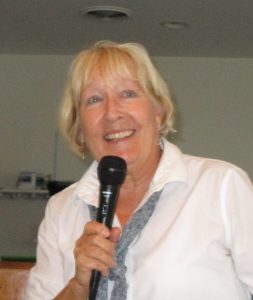 First at the podium was Rail-Trail Council project manager Lynn Conrad who, Chamberlin noted, will be honored with the Shelbourne Environmental Leadership Award in October by the Pennsylvania Environmental Council. Conrad (above) detailed surface improvements to the Endless Mountains Trail that runs east from Montrose, as well as new signage. 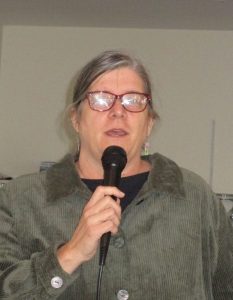 Elaine Poost (above) of the Bradford County Regional Arts Council was the first of three speakers present from Bradford County, sharing her excitement about a new program series for preschool children that focuses on nature and the outdoors. “For people to care about where they are at, you need to start young,” she stated. Classes have begun at the Stohl Nature Center in Wysox and will branch out from there. EMHR funding will also be used to enhance the Wyalusing Community Core Trail Project with interpretive signage, Poost noted.

Bradford County Historical Society Museum curator Matt Carl (above) also volunteers with the LeRoy Heritage Museum which, he explained, was already too small when it was opened in 2010. Thanks to property and monetary donations in 2015 and a mini-grant from the EMHR, interior work can continue to restore an 1896 hotel and ballroom that will serve as the new exhibit hall while the current museum becomes a research center. 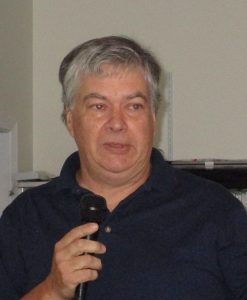 Bill Brasington, director of interactive learning for the Troy Historical Society, is spearheading efforts at the Troy Theater, a “black box” theater and exhibit space filling the former VanDyne Oil Company building on Fenner Avenue. Removing and enclosing the old windows of the building created a 180-foot long, 12-foot high wall that is perfectly suited for a mural that depicts historical events back to the French & Indian Wars, Brasington (above) related. EMHR funding “will help us to tell that story.” An additional component will include an audio segment that people can hear on their car radios. 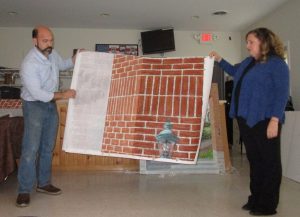 Erica Rogler (above, right), who is the executive director of the Wyoming County Cultural Center, detailed a similar project on which she has been working with Tunkhannock artist Bob Lizza. With EMHR funding, Lizza (above, left) will apply 35 four-by-sixty-inch hand-painted panels depicting the Nicholson Bridge as it looked about 100 years ago. The project has been in the planning stages for about six years and sprang to life when the mini-grant allowed for committee meetings and concept design this past spring. The first massive panel of the mural will start to go up on the back of the Dietrich Theater building at the end of October. 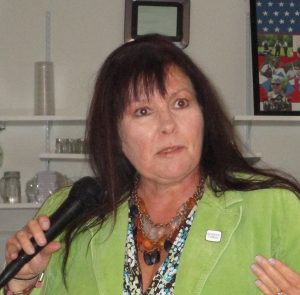 Also happening in Wyoming County is the enhancement of the trail system on and around the Keystone College campus, as elaborated by college grants director Liz Ratchford (above). New and replacement signage would be impossible without the help of the EMHR, she maintained. One of the first will grace a segment of the Trolley Trail under which a cattle underpass was constructed a century ago.

PP Bliss Gospel Songwriters Museum Wendy Carrington was unable to attend the meeting but sent a detailed update on EMHR grant usage at the facility in Rome that was read by Chamberlin. The museum has received a fresh coat of white paint, and the plant committee is researching period landscape elements that will work best at the site. The project will be complete, Carrington noted, when fifth-graders from North Rome Christian School visit in the spring to clear the old vegetation from flower beds and install the newly approved plants.

Candace Sturdevant of the PA Route 6 Alliance was key speaker for the event, providing an update on the Route 6 Façade & Signage Program, for which her organization hopes to procure $133,000 from the Department of Conservation & Natural Resources (DCNR) specifically for Bradford and Wyoming counties. The first phase of the project was conducted in the PA Wilds region, west of the Endless Mountains, and created what Sturdevant deemed a “domino effect.” In Coudersport, where eight properties were assisted with improvement grants, she noted as an example, the businesses in between those that received grants followed suit and spruced up their store and restaurant fronts.

In addition to business and property owners in Bradford and Wyoming counties, municipal governments are also eligible for the $5,000 grants, which require a 100 percent match. The program was developed by the PA Route 6 Alliance for adaptive reuse of additional structures, bringing substandard buildings up to code, and simply giving others a face-lift to enhance commercial development and foster community pride. 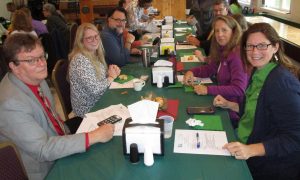 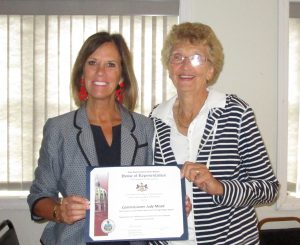 Wyoming County commissioner Judy Mead (right) was thanked for her years of service to the EMHR board as the official government representative of the county. Mead helped with the formation in the organization in 1998. Leslie Cadden (left) presented Mead with a citation from Rep. Karen Boback. 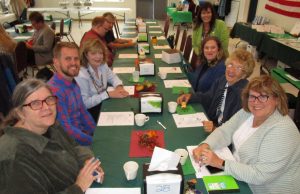