In: Scouting
With: 0 Comments

Girl Scouts get to enjoy Ely Lake every day while they are at Camp Archbald, whether for swimming, boating, kayaking or testing their skills on standup paddle boards, like the girls above. Below, (from left) Claire, Daniella, Krista, and Shilo are examining a bird’s nest brought to Camp Archbald by a DCNR environmental educator. The girls also learned how to find birds with binoculars and later dissected owl pellets to see what the primarily nocturnal predators had eaten. 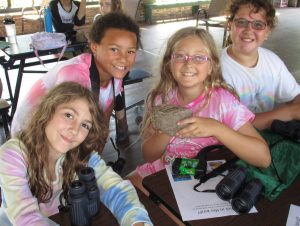 This summer marks the fifth year that Supporters of Camp Archbald have conducted two weeks of resident camping for Girl Scouts. Well over 100 girls ages 6 to 18 took part in the summer camp program this year, which ran from July 10 to 22. Many of them stayed for both weeks, coming from 12 Pennsylvania counties, as well as from the states of New York, Virginia, Delaware and North Carolina.

“We are definitely trying to expand our reach,” said camp director Jamie Puchalski, who attended Camp Archbald as a camper in 1991 and stayed on as a counselor for a number of years.

She took a break to concentrate on raising her own children, always assuming that her two daughters would someday stay at the camp. When she heard of plans to close the facility, which opened in 1920, she joined others who successfully rallied to keep Camp Archbald open.

“Girls had been coming here for a hundred years, and we didn’t want them to lose that experience,” Puchalski related. She and a volunteer staff of 40 put everything into those two weeks of camp to both keep traditions alive and introduce the girls to new programs and adventures. “Some people use their vacation time from work to come here,” she stated.

The girls are divided first into age groups and then given options for a week of activities and exercises based on a theme. This summer’s most popular themes included Harry Potter and Climb On, the latter conducted at the camp’s rock climbing wall, zip line, and low ropes course. Those who elected for the Climb On theme were taken off campus one day to a high ropes course. Horseback riding is also a very popular theme, thanks to a partnership with Hidden Hill Stable in Scott Township, Lackawanna County.

The level of camping varies from staying in tents on platforms to bunking in cabins. Some of the older girls can even choose to spend a week on a houseboat. Regardless of the options they chose, all campers have daily opportunities for swimming in Ely Lake and boating two days per week.

“The activities are designed to give the girls a chance to learn some independence, form partnerships, and build self esteem. We try to get them to step outside of their comfort zone,” said Pulcalski. In addition to traditional camp activities like hiking and cooking over a campfire, she added, “We like to bring other things in to give them the opportunity to try something new.”

On July 20, special guests at the camp included DCNR environmental education specialist Tony DeSantis and Twila M’Connell, a folk artist (below, standing) from the New Albany/Dushore area. The previous day, campers had an opportunity to get up close and personal with snakes and a tortoise when they were visited by educators from P.T. Reptiles of PA. 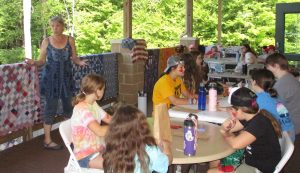 Like Pulchaski, many of the volunteer staff members started as campers. “We love the camp, and we love working with the girls,” she remarked. “I wouldn’t be who I am today without my experiences as a camper and a counselor.”

Girls in 11th and 12th grade can opt to be Counselors in Training. The leadership program teaches them how to work with and teach younger children. They wrap up their stay by shadowing an adult counselor for a day and can serve as junior counselors when they turn 17. A tradition long ago adopted by counselors to take on a “camp” name has been passed down to the counselors in training.

“Sometimes you pick it, and sometimes it’s earned,” Puchalski explained, citing a girl going by the name of B-Sting because she was stung so badly last year that she had to go home for a week. That didn’t prevent her from returning, however, to be trained as a counselor.

Camp Archbald is located one mile west of Brooklyn and four miles east of Dimock in Brooklyn Township and is the second oldest Girl Scout camp in America. Its 230 acres were donated by the Ely family, descendants of which still reside across their namesake lake from the camp. “It’s nice because they are very supportive and want to keep things the way they are,” Pulchaski said of the family.

Ely Lake is considered a kettle lake, a water-filled depression left behind by receding glaciers. Its unique formation has drawn scientists and students to map it with sonar equipment and ascertain its depth. It is so deep, Pulchaski said, that the water doesn’t “turn over” like that in a spring- or stream-fed lake or pond. “That’s some ancient water down there,” she said.

Adding that kind of mistique to the towering trees and fern-lined paths in the surrounding forests and majestic structures like Schoonover Hall constructed in 1928, it’s easy to understand what makes Camp Archbald so special to so many people – and why they worked so hard to keep it open. And one doesn’t have to be a Girl Scout to appreciate the magic of the venue. Many of the camping areas, buildings and pavilions can be rented when camp is not in session.

Pulchaski and her fellow staff members are proud to be among those to save the camp from closure and to provide a full camp experience for the girls. They are looking toward the next hundred years with enthusiasm and hopes of bringing in campers from across the country and from around the world.

“We have a good relationship with the Counsel,” she said of Girl Scouts in the Heart of PA, which is headquartered in Harrisburg. “I feel that they appreciate us being able to offer this to the girls.”

Interested readers and learn more about Camp Archbald by logging on to supportersofcamparchbald.org or by calling 800-692-7816. 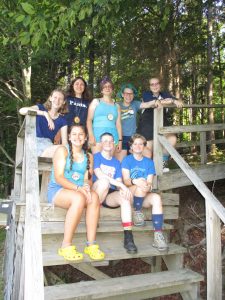 Having the time of their life while learning how to be counselors at Camp Archbald are (front, from left) Bubbles, Pikmin, Apollo, (back) Echo, B-Sting, Fin, Nemo, and Prism.