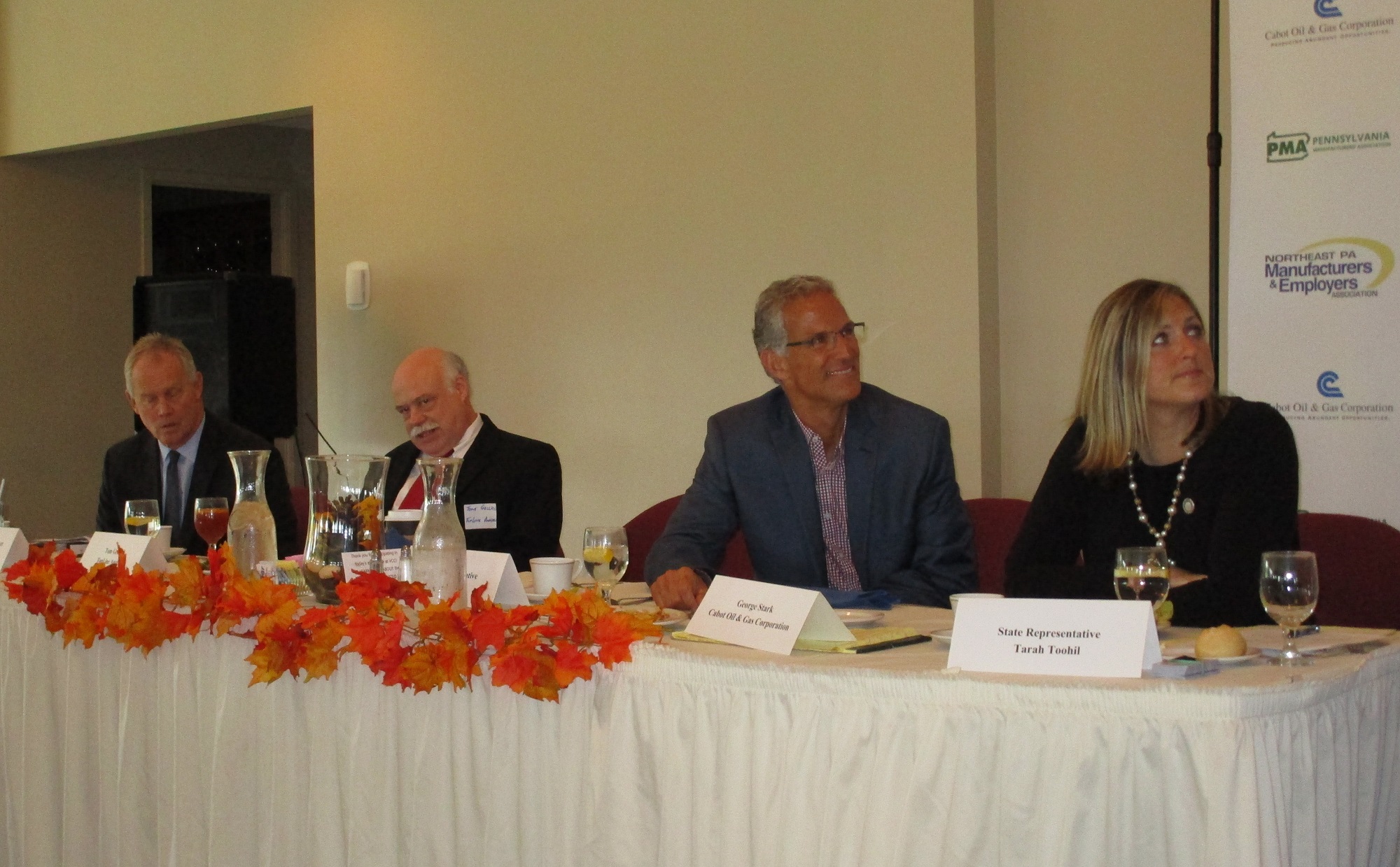 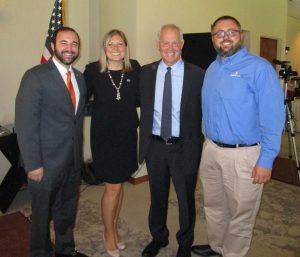 At an Oct. 2 ‘Think About Energy’ briefing sponsored by the Greater Hazleton Chamber of Commerce, lower Luzerne County business leaders and elected officials were abuzz about the next phase of Pennsylvania’s natural gas boom and howthey can benefit from it.

While people on the fringes of the Marcellus shale region have often been less engaged by the industry than those in the midst of it, the question of what to do with abundant natural gas coming from Bradford, Susquehanna and Wyoming counties that is already being piped through their region now falls upon them as an unprecedented opportunity.

Local educators and business owners comprised much of the audience, but there were also 40 students in attendance from Hazleton’s Career & Technology Center and STEM Academy. Toohil arranged for their participation, viewing them as ‘an up-and-coming human resource’ and the generation that has the most to gain from the revamping of that area’s flagging industrial parks.

Much of the conversation focused on the use of dry gas byproducts – methanol, urea, and ammonia – which serve as the feedstock for products like windshield washer fluid and fertilizers. Toohil and Kaufer are confident that House Bill 1104 – Energize PA – is their antidote for economic recovery. Trades representatives, educators and the students were told that the need for skilled laborers to construct the plants will be the highest in decades, as will the necessity for engineers and computer specialists to run them.

George Stark assured the youths and prospectors on hand that there is enough natural gas coming down the pike to fuel all their dreams. “We know that we can drill 3,000 more wells in Susquehanna County and get it into Luzerne and Lackawanna counties,” he stated, adding with a laugh, “We have natural gas coming out our ears.”

Three of the Hazleton students posed questions to the panel: “How many jobs will be available when we graduate?” “What courses should we be taking?” and “What do you do about the negative effects of drilling?”

Stark related the overwhelming need for skilled workers in Susquehanna County and asserted that the demands to build and staff plants in the Hazleton area will parallel that. “We needed them yesterday,” Stark remarked. “And we are now doing everything we can with our own technical schools and colleges to catch up.” He emphasized the importance of math and science studies, as well as chemical engineering, and told the students that the incoming companies prefer to hire local people who want to stay in a given area.

Responses to concerns about the environmental impacts of drilling came from both Stark and Wyoming County Chamber of Commerce president Gina Suydam, a guest at the event. Cabot recognizes that disturbing the land for any industrial use has consequences, Stark noted, but the company works hard to mitigate those circumstances and “leave it a better place than how we found it.”

Suydam, who resides and works amidst the gas fields, encouraged Middleton to be wary of what she might read about the gas industry on social media that suggests that land is destroyed. “Come and see what it looks like when it’s done,” Suydam said of completed gas pads and pipeline right-of-ways. “They go out of their way to enhance the landscape, both aesthetically and with proper vegetation and needed nutrients.”

Central Bradford Progress Authority president Tony Ventello points to the many innovations that have come about in the region over the past decade. Concerns of contamination and the high cost of exporting residual waste, if its export is permitted at all, has resulted in a host of new uses for byproducts.

“Science is solving the problems,” Ventello stated. The commitment to limiting environmental impact and a need to secure investments are the factors that have driven such innovation. Ventello cites Eureka Resources in Bradford County, where Cabot sends some of its waste water as a prime example. “Because Pennsylvania has been stringent about waste water requirements, there has been technology involved around how to use that water,” he noted. First, the plant in Standing Stone Township began separating the salts from the water for swimming pool filtration products that are sold commercially. Ventello is currently assisting the company with its applications to the federal government to extract lithium from the water for use in batteries.

In addition to the potential products discussed at the meeting in Hazleton, Ventello added synthesized diesel fuel and unleaded gasoline, lubricants, and waxes to the list. At Global Tungsten & Powders Corporation (GTP) in Towanda, he explained, there are efforts underway to isolate hydrogen from natural gas. “The best play for the state of Pennsylvania economically is to use our gas in a value-added sense. The state should be focused on utilizing this gas as much as possible within our own boundaries,” he asserted.

RHL Companies CEO Robert Heed also attended the event. Noting that he does business in Susquehanna, Luzerne and Schuylkill counties, Heed related that those to the south have the same concerns about about land use, infrastructure and the state’s tax environment. “The bills put forth in the Energize PA package look to address these concerns and will attract more projects to the region,” he stated.

As a side note, Suydam noted how the perspective of the Marcellus shale region in Luzerne County differs from that of people in Susquehanna and Wyoming counties. “It was a bit amusing at first to hear them reference the gas from here as being in their ‘back yard,’ as that’s an expression we often use,” she remarked. “I guess we’d be more precise to say that it’s ‘under our feet.’ Nonetheless, it was impressive to realize how much value they have come to place on it, and I’m encouraged to work with our with our neighbors in Hazleton to put our gas to use locally and help to boost the overall economy of Northeast Pennsylvania.”

“I’m so pleased to see that Susquehanna County’s natural gas will be fueling growth and development in places as far away as Hazleton,” Rep. Jonathan Fritz (PA-111) concurred. “I was honored to sponsor legislation that was part of the Energize PA package. This is pro business and pro consumer legislation that is going to fuel business growth and ultimately revenue growth for the Commonwealth.”

2019-10-09
Previous Post: Brilliant Sunshine Greets Guests at Fall Fest in Noxen
Next Post: Can the Prison Be Built Upwards?