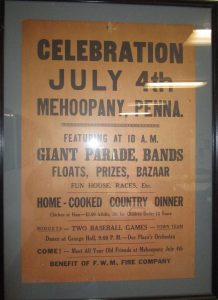 FWM Fire Company members (top, from left) Steve Henning, Sr., Becki Henning, Eugene Adams, Jr., Almon Otten, and Steve Henning Jr. invite area residents to enjoy the annual Fourth of July parade and order barbecue chicken to take home after the parade. Floats and food are a long-standing tradition for the community, as seen in a poster (above) from the past.

The FWM Volunteer Fire Company, which serves Forkston, Windham, Mehoopany and North Branch townships, has a long history of community events. During the long stretch of coronavirus related shutdowns and slowdowns, company members have missed interacting with the public. That’s why FWM officers have decided to start planning for the Fourth of July, even though they are as of yet unsure how aspects of the popular annual celebration will play out.

Three elements of the Independence gathering will go on, despite some modifications – the fireman’s parade, the chicken barbecue, and the fireworks. The parade and barbecue will both start at 10:30 am on Saturday, July 4.

“We hope to get the other fire companies out to support us,” said Henning, adding that he is uncertain whether there will be prizes for parade participants this year.

FWM invites owners of antique vehicles and farm equipment, all area first responders, and any other groups or individuals who would like to enter a float to meet in the Mehoopany Baptist Church parking lot at 10 am for the procession down Rt. 87 to the firehouse. No registration is required.

There, the chicken sale will already be underway. This year’s barbecue is take-out only. Dinner is half a chicken with roll, baked beans, cole slaw and dessert for $11. Orders will be taken by phone at 570-833-5185 or on the Facebook page FWM Volunteer Fire Co. and, when it’s gone, it’s gone.

While at the firehouse, patrons can get a look at the two new bays that are near completion to house the rest of the company’s apparatus. As an update to this story, which was originally published on June 14, FWM officers were happy to announce that there will be fireworks that evening.