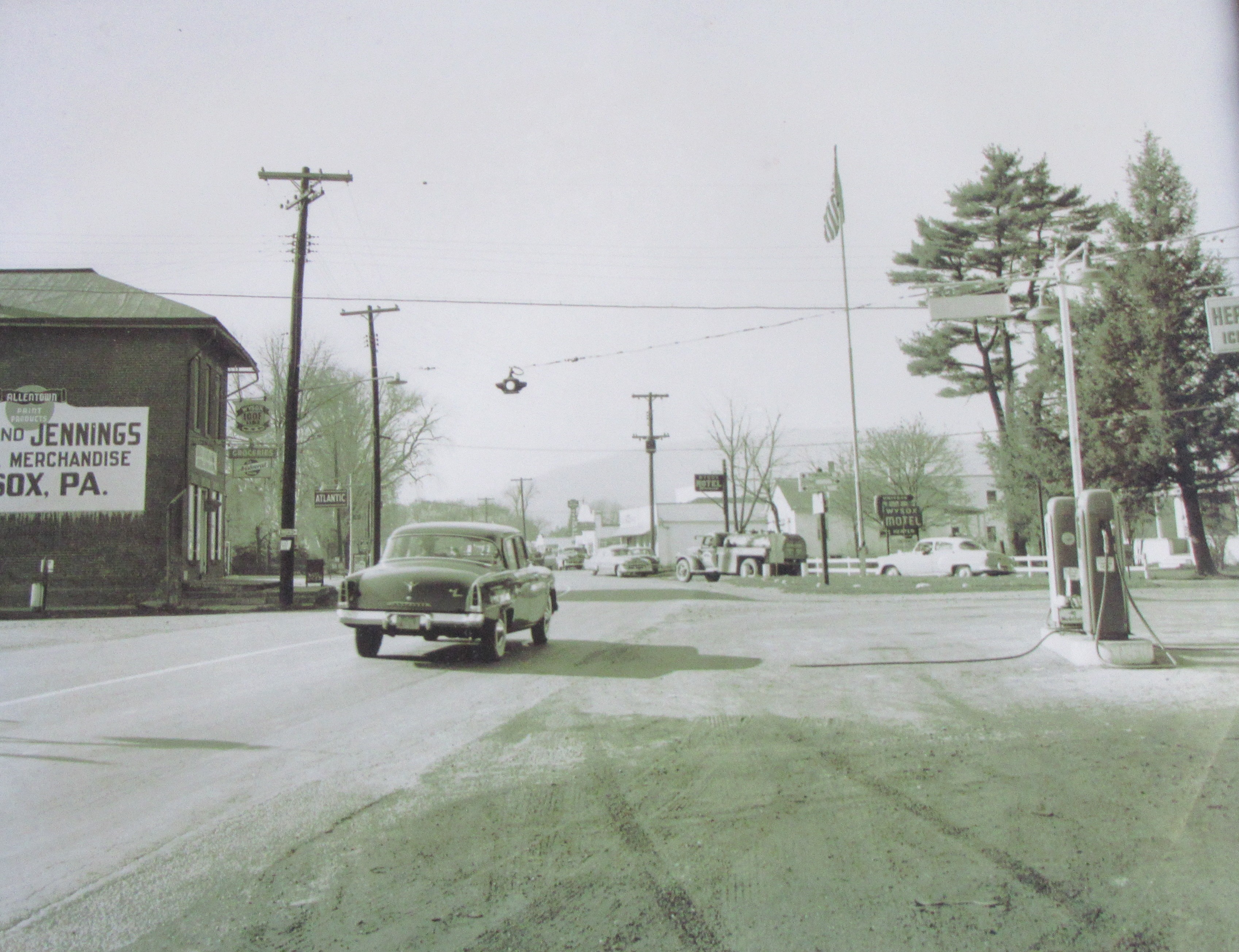 The big blue building at the intersection of Routes 6 and 187 in the village of Wysox is quite likely the oldest commercial structure in Wysox Township. Handwritten notes resurfaced recently during an interview with current owner and insurance broker Tim Franklin that trace its origins back to at least 1828, when the first and second floors were utilized as a general store by the Piollet family. This photo dates to the mid 1950s, when Quick & Jennings was still in the first floor and the Odd Fellows had a club on the second floor. It was taken by Daily Review photographer Staley Clarke and loaned to Franklin some years ago by Dale Fullmer.

(As posted at www.wysoxtownship.org in January 2016)

The French Piollets farmed much of the area between the Susquehanna River and their store at what would become the intersection of Routes 6 and 187. The family would eventually build a house across (now) Route 6 and then the iconic mansion across (now) Route 187 in which Dandy Mini Mart currently operates. The Piollets effectively owned the entire block and beyond. This building was apparently built for commerce, and a number of prominent Wysox families have been successful at business there.

The building was reportedly financed by Elizabeth Whitney Piollet, wife of French immigrant Joseph M. Piollet, whom she married in 1810. She died in 1840 and is buried in the Wysox Cemetery. Joseph was a decorated soldier under Napoleon Bonaparte and was seriously wounded in Austerlitz, Czech Republic in 1805. He moved to America soon afterwards to manage the sale of French-held lands after French Azilum was disbanded. He moved to Wysox from Rummerfield in 1808 and died there in 1850.

The brick used in the construction of the building was produced in a kiln on Fifth Street in Towanda and matches the brick used to build the Wysox Presbyterian Church, according to Emma Waldo. (Emma was one of two daughters of Lucius Joseph Waldo, who also once co-owned the building. She consented to the use of her name in writing when she presented two pages of hand-written details about the building to Tim Franklin in 1982. Her recorded memories led to additional research that substantiated and expanded her efforts and filled in some blanks.)

In approximately 1890, Frederick G. Smith and Edward A. Waldo of Wyalusing bought the store. Their father, H. Eugene Waldo, had moved from Moravia, NY, to Wyalusing in the 1880s and managed Welles Mills and other canal-related businesses. While the first floor of the building remained a general store, the second floor was rented to operators of a drug and apothecary business. The owners also ran a Smith & Waldo store at Main and Church streets in Wyalusing, selling dry goods, carpets, household furnishings, shoes, clothing and food both there and in Wysox. Both locations were noted for sales of agricultural and dairy products in a 1911 archive entry with the Pennsylvania Dept. of Agriculture.

In about 1914, the business became known as Waldo Brothers when Lucius bought out Fred Smith’s interests and joined Edward. The siblings continued to run a general store on the first floor until 1948, when Lucius died. Edward had retired in the early 1940s. Lucius’s daughter Emma Waldo recalled that automobiles were parked in the small building added to the rear of the larger structure up to World War II. During most of this time, the trim on the red brick building was painted pink, and a porch on the front of the building was white.

Emma had an older brother, Cedric, and younger sister, Dorothy. Their mother, Josephine, died prior to 1940.

Floyd Vandervert purchased the building from the Waldo estate in 1948 and rented it to the Quick and Jennings families for continued operation as a dry goods and grocery store. The Odd Fellows met in the second floor for a number of years during that time period.

In 1955, Nelson Lundy purchased the building, and Quick & Jennings had to move swiftly, according to Joann Powell, daughter of John and Muriel (Quick) Jennings.

“My dad and other family members took all the lumber from their own properties and had the (new) store done in 90 days,” she said of the grocery mart built across and a little farther west on Route 6.

Gary Lewis ate meals with his family in the Odd Fellows lodge. “I remember helping my dad and brother Sid and other lodge members move (out in 1955),” Lewis said of the social organization’s relocation across the river to the former Macedonia school building. “They had a huge shuffle board table which had to be moved.”

Lundy operated Lundy Office Supply in the building until his death in 1976. During much of that time, former Orwell dairy farmer Dean Franklin ran an insurance business in the rear portion of the building, having sold off his herd of cattle in 1962. Dean was killed in a car accident in May 1979. His son Tim, who had started an insurance business in Lycoming County in 1975, closed up shop and moved his family from Jersey Shore to the Wysox area. He bought the business from his mother, Shirley (Gardner) Franklin.

When Lundy died, long-time sales manager Dottie Schoonover stayed on as manager of the office supply store for several years until Chuck Kovacs bought the business, changed the name to County Office Supply and moved the business in 1978 to his present location on the Golden Mile across from the Towanda Country Club golf course. (A separate story about the Kovacs can be read at www.wysoxtownship.org)

Dean Franklin was originally from Standing Stone Township, and Shirley Gardner was from North Towanda Township. They married in 1950 and had four children; Tim, Sue, Rebecca (Becky), and Julia (Julie).

The building in which the Franklins continued to operate their insurance business remained part of the Lundy estate until January 1982, when it was purchased by Tim Franklin and his wife, Noknoi, whom he had met and married in Thailand in 1971. Together, they had three children; Tilden, Trenden, and Thailey. They reside in Wysox Township.

Tim attended Northeast High School and subsequently entered the army, spending a year in Vietnam. Upon his discharge, Tim went to Penn State University, where he got a degree in history and took some insurance courses on the advice of his father.

“I was actually thinking about getting into the CIA or becoming a teacher,” Tim related in a January 2016 interview. “But God had different plans.” Tim started in Lycoming County as a State Farm insurance agent. His father was a Farm Family agent.

Dean went independent in 1977 which, as opposed to remaining a “captive” agent, allowed him to broker with multiple insurance companies. Tim attributes the continued success of the business to that flexibility and a loyal customer base.

“We appreciate these families very much,” he stated.

When Tim returned to the area in 1979 with his Lycoming County clients intact, Franklin Insurance was still handling policies for about a thousand farms.

“I enjoy dealing with farmers,” Tim remarked. “When they become clients, they become friends.” Today, there are less farms, but the ones that remain are larger.

Upon purchasing the building, the Franklins moved the business to the front after renovating the space. Tim still handles most of the farm policies, while his son, Tilden, deals more with the general public. Tilden’s wife, Angie, serves as receptionist for the business in addition to managing billing and accounts receivable. Noknoi handles bookkeeping and accounting.

Tim noted that the business climate in Wysox Township did not change much for him until the gas industry arrived. “Then we saw some commercial growth and new businesses started up. It brought new customers and generally had a good effect on the local economy. It has helped people,” he stated.

Tim currently has no plans to retire and looks forward to coming to work with his family each day. Franklin Insurance continues to enjoys “healthy growth,” he said. “Technology has really made it easier to handle the business without having additional labor.”