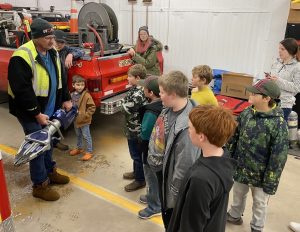 Webelo Scouts from Springville Pack 97 are working on their First Responder merit badges and recently got a big boost from a number of frontline workers. Members of the Rush and Springville volunteer fire departments met with them at the Springville Fire Hall, as did a fire marshal from the Pennsylvania State Police, a K9 unit from Tunkhannock, and a frontline nurse.

Speakers at the event agreed that the motives behind their participation was two-fold. Each wanted to provide the youths with a basic understanding of what their roles as first responders involve. But they also look to the Scouts as the next generation of potential frontline attendees and caretakers.

“We need all of the future healthcare workers that we can get, as the need is getting greater,” said Kayla Kiefer, an RN supervisor at Lourdes Hospital in Binghamton, NY. Kiefer explained to the youths that a “frontline nurse” is hands-on with a patient, caring for and treating them alongside other members of a multidisciplinary team. “The Scouts liked the hands-on education of how to take care of minor sprains, cuts and scrapes. They were engaged, and I hope it got them interested in healthcare.

State Police Cpl. Justin Landsiedel spoke to the Scouts about his duties as a fire marshal, and Tunkhannock police officer Ben Seibert introduced the youths to his K9 companion Etu and explained how a dog’s unique abilities are an asset to the force. The boys and girls got a double dose of firefighting basics from Aaron O’Brien and Jim White of the Springville Fire Company and Brandi and Phil Hillard from the Rush Fire Department.

“We talked about what it means to be a firefighter,” Brandi Hillard related. “We go out when we are called, day or night, to help those in need and sacrifice time with our loved ones in order to help someone else.”

“We showed them all the apparatus and explained the different functions of our vehicles,” O’Brien said of the brush truck, tanker, engine and additional apparatus on site. “We let them climb through the engine so they could see what it’s like for the crew to sit in the back.”

“We also went over the pieces of PPE (personal protective equipment) that we wear when we are at fires and calls because that is what we need to keep us safe,” Hillard related. She donned her full PPE to demonstrate as well how much additional weight it adds to the apparatus the firefighters are already working with.

O’Brien noted that the youths took particular interest in the “jaws of life,” a hydraulic tool used to extricate victims of vehicle accidents. “Not a lot of people get to see them,” he remarked. “They listened and asked a lot of questions about the tools.”

“Lastly, we spoke about our need for more volunteers and that, even though the Scouts are still young, they could ask their local fire department if they could come out during their work night to see what they do,” noted Hillard, who added that several of the youths said they they had firefighters and first responders in their families.

“It was a lot of information to comprehend in a short amount of time,” O’Brien suggested. “But they seemed like they enjoyed it and were interested in learning more about it.”

According to den leader Tyler White, the presentations will be followed up with some book learning and some crafts retaining to first responders. “They are a great group of Scouts,” said White, who noted that not all of the Pack 97 members were able to attend. “It’s been a privilege to watch them grow and mature this far, and each one of them would be a true asset to our community should any of them choose to take a role as a frontline worker.”