In: People In the News
With: 2 Comments

Crew members involved in the Harmony Township cabin build varied from one work day to the next and included (top, from left) Alice Rockwell, Peck Milbauer, Dana Rockwell, Cindy Klenk, Heather Bronson, Chuck Culnane, and Stan Rockwell. Below, Dana and his son, Airyl Rockwell, lift exterior sheeting into place as the cabin continues to grow.

Dana Rockwell of Susquehanna Depot and many of his closest friends and family members are known to employ methods from the past to tackle projects in the present that will someday be part of history. In 2017, he and Peck Milbauer built skin-on-frame kayaks for a 444-mile journey down the Susquehanna River from Cooperstown, NY, to Havre De Grace, MD. Milbauer is one of numerous helpers that Dana has had for an ambitious new project this past year.

A stone’s throw from the New York border in Harmony Township, a nearly finished two-story cabin dominates a clearing in the woods. Though not yet completed, the structure that Dana calls “rustic” is already a piece of art, owing largely to the construction techniques and natural materials – many of them procured locally, if not onsite.

“I have been dreaming of building a rustic cabin for 30-plus years,” Dana related. “I had known about this remote lot of land for several years and knew it was the land I wanted.” The property was on and off the market for several years but came up for sale again in the fall of 2021. “My great-grandparents and family lived on the adjacent property 100 years ago, so I feel a connection to the area.”

“I know that Dana was excited to be building near the area of so much family history a long time ago,” said Dana’s father, Terry Rockwell, who identified the ancestors as Dana’s great-grandparents, Ray and Olivia Rockwell. “The most exciting part of the process for me was bringing to life Dana’s vision of what he wanted the cabin to look like.”

An old stone foundation, estimated to be 150 years old, was in good shape and deemed reusable for the new structure. A previous owner had installed a modern septic system, so that was a second important asset that would lead to a quicker start. Otherwise, the five-acre plot was highly overgrown after many decades of non-use. And the closest electric lines are a half mile away in New York State.

The skyrocketing price of lumber might have stalled the project if not for the abilities and can-do attitude of Rockwells and their band of do it your-selfers. “My father has done a lot of construction projects over the years, building his home in 1970s and an addition in the ’80s,” Dana explained. “I learned a lot from him and uncles I’ve helped.” Dana further honed his skills as part of a crew of contractors in Montana and totally renovated three homes after returning to the area in the early 2000s.

Dana brought longtime family friend Jon. C. Burdick on board in January. It was cold, the ground was snow-covered, and there was little shelter from the elements. “It was a totally new adventure for me with this kind of work, but I was in pretty good shape and up to the challenge,” Burdick remarked. “Others soon chipped in on days they could be there. Multiple chain saws were running, dropping trees to make room for what was going to eventually come.” 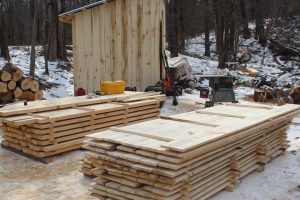 Not only did a large chunk of land need to be cleared for the new build, Dana and friends saw the healthy trees around them as a viable source of wood for the project. They started felling trees in January and erected a band saw mill and shed in February. In addition to milling selectively harvested aspen and cherry trees onsite, friends brought in recently felled pine and spruce, and a tree service friend delivered them many loads of usable logs. “All the logs were milled on the property,” Dana noted. Two additions were built onto the sawmill shed, as well as a solar kiln to cure the lumber.

The original foundation was secured and a 12-by-12 foot foundation was added to accommodate the new cabin, which has a larger footprint than the original. The design was Dana’s and includes two bedrooms and a covered porch and balcony overlooking Cascade Creek.

Ongoing help came from parents, including his mother, Wanda Rockwell, and son Airyl. His aunt traced the property through a 150-year-old census and found the family that lived there at the time. Using Facebook, Dana, his father, and Jon Burdick, have been keeping followers apprised of and amazed by what they have been doing.

“Obstacles included bring in water during the process of rebuilding the foundation with stone and mortar and concrete blocks,” said Terry. “We still have a need for water and will probably have a well drilled some time in the future.”

Being that electricity is not readily accessible, the crew continues to be creative to address the need for some power. “It will be off-grid,” Dana related. “I plan to use solar and propane for electric generation, and it will be heated with wood.”

“Putting heavy support beams on the first to second floors was a real challenge also. It took five of us to lift them,” Burdick offered. “There really has not been anything really easy except maybe sanding the boards. But there is a very relaxed atmosphere there and lots of good-natured kidding around. It has been a wonderful experience for me, and I have learned a lot.” 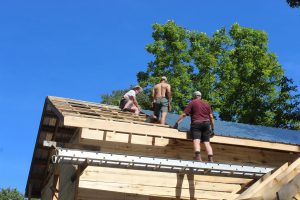 The roof has just been finished so that interior work can be done during the winter as weather permits. Handmade, scalloped wooden shingles are being made to side the structure. Wanda has been helping with the sanding and staining. When the cabin is complete, the family will use it for weekend retreats. “We may eventually move in,” Dana offered. “I want it to be used for generations of my family to come.” 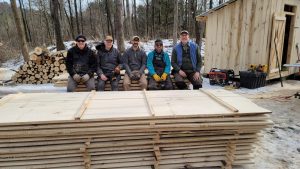 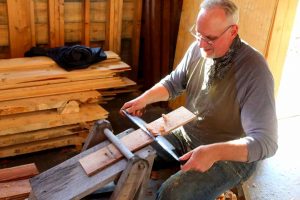 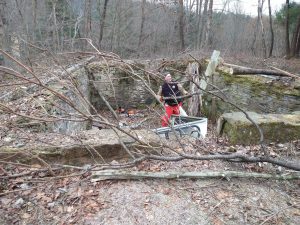 Dana Rockwell digs deep to clear out the 150-year-old foundation that was stabilized to become the base for a new cabin. 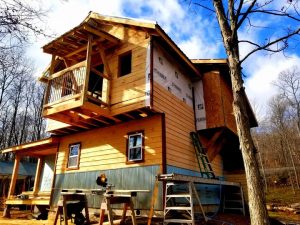