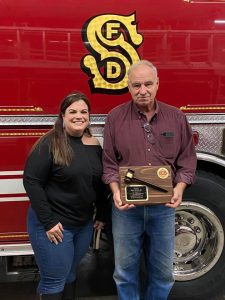 Celebrating 50 years with the Susquehanna Fire Department are (top, from left) Dick Hennessey, William Mazikewich, Roger Holleran, Joe Schell, and Steve Glover. Mike Keyes (above, right) was thanked for his eight years of service as president of the fire department on Nov. 8, and Kimberly Tuttle was elected as the new fire company president.

Story by Rick Hiduk/Photos courtesy of the Susquehanna Fire Department

Five men who joined the former Erie Hose Company as junior members were recently honored by the consolidated Susquehanna Fire Department at the company’s annual meeting for 50 years of service to the outfit. Before the banquet was over and outgoing president Mike Keyes was thanked for filling that post for eight years, Kimberly Tuttle was elected as the company’s new president.

Junior membership was a fairly new concept when Steve Glover, Dick Hennessey, Roger Holleran, William Mazikewich, and Joe Schell joined in 1970. But it got young men and women involved in the operations, helping with maintenance of the station and apparatus, and provided a more methodical training path for those who would actually fight fires when they turned 21. 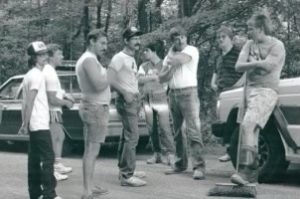 “It was more community-spirited back then,” Hennessey recalled of fire company membership. His and Schell’s fathers were already involved with the company, and the boys’ friends joined with them. “We didn’t have all the electric gadgets that the kids have now days.” 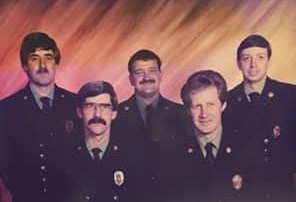 There have been big changes through the years, of course. The best of them, Hennessey suggested, is a drastic modernization of equipment that makes their work safer and a bit easier. “We used to go out in rubber rain coats,” he said of the 1970s. “Now they have turnout gear with air packs.”

Despite the challenges faced by most first response units to attract and maintain members, Hennessey noted, “We’re more needed now than ever in the sense that we are called out for everything.” Firefighters respond to downed trees and wires, flooding, and personal assists that aren’t actually medically related like helping a person get out of a chair.

But the company also keeps busy with an average of 350 ambulance calls per year. Erie Hose Company has had an ambulance in service since at least 1949. Erie was chartered in 1888, and Susquehanna Chemical Engine Company started up in 1911. The companies merged in 1978 to more effectively serve the community and pool their resources.

Through the years, the original junior members have served in numerous posts. Hennessey has served as both chief and president and is currently a member of the Advisory Board. Holleran and Glover have also both served as chiefs. Schell has been president before and also now sits on the advisory board. Among his many roles with the department, Mazikewich has been a vice president and is currently the ambulance company treasurer.

“I think the biggest part is being able to give back to your community and help someone,” Hennessey remarked. “We give out a college scholarship each year to someone who is active and volunteering in the community – not just with the fire company.”

“They are a true example of what volunteer service is,” Tuttle said of the 50-year members. “Each of them has their own area of expertise that they are willing to teach and share.” Tuttle began hanging out at the firehouse when she was five years old. She joined as a junior when she was 16. “I have been able to learn from this dedicated group. When people think of volunteer firefighters, they often only see us as the people in the loud trucks rushing to a fire. They don’t realize how much it takes to run a department.”

Hennessey is happy to see colleges getting more involved in instilling the value of volunteerism and community service in their students, as it has steered some new people to the department. He doesn’t fault those who might be interested but pursue other options. “It’s hard to get the younger people to come and get involved than it used to be because of the time commitment,” he said of the hundreds of hours of training and certifications required by the state, especially on the ambulance side.

Nonetheless, Hennessey welcomes youths to come and see what the fire department can do for them of which they might not be aware. “It’s an organization that would benefit them and give them experience that they wouldn’t have otherwise, even if they are going on to college,” he offered. “I think you make friendships that last for ever – friendships that you can always count on.”

The firehouse does not have a social club, but members did stop by to hang out and catch up with each other more often before non-essential gatherings were discouraged in the face of the pandemic. Members still meet on the first Monday of each month, however, and get together once per week for training sessions.

Though the firehouse may be quieter than usual right now, Hennessey maintained that community support for the organization has remained strong. “Even during this time when we can’t do the functions that we used to do, they’ve been more than kind and very generous,” he stated.