Due to staffing shortages at the Wyoming County Correctional Facility, all 13 female prisoners have been moved from the facility in Tunkhannock to the Wayne County Correctional Facility. There are five males boarded out too, and that number could grow if new help isn’t found quickly. New commitments have also been outpacing prisoner releases as of late, further compounding the problem.

Warden Ken Repsher shared the stunning news at the monthly Prison Board meeting on Tuesday that preceded the regular public meeting of the Wyoming County Commissioners.

“We were doing pretty well, but it’s going the other way on us right now,” said commissioner chair Rick Wilbur. “It’s a tough situation.” The cost to the county for housing inmates elsewhere is seventy-five dollars per day plus medical expenses, which has already eclipsed $25,000 for the year.

Both male and female guards are badly needed, the commissioners explained, as another one resigned on Monday. To encourage new applicants, the county is offering a $2,000 sign on bonus for new employees, half of which is paid out after the correction guard completes training and the remainder after six months. To help retain existing employees, they are are also receiving $2,000 bonuses in two installments. Interested readers can find an application online at www.wycopa.org.

The commissioners are also looking into available grants or potential use of Act 13 funds to cover the cost of an alarm system upgrade at the prison. The current apparatus was installed in the late 1980s and has become expensive to repair. The current estimate for the project stands at $63,000.

Negotiations between at least three large medical service entities and Commonwealth Hospital are progressing in advance of the looming closure of the ER at Tyler Memorial Hospital. The commissioners announced two weeks ago that they had invited numerous parties to the table to discuss options for keeping emergency services at the facility west of Tunkhannock. The commissioners are not an active part of the discussions, but they have been in regular contact with those involved.

“At their request, we are keeping that quiet right now. They are all reputable hospitals,” Wilbur related. “Commonwealth is definitely willing to sell or lease. So that’s a big step.”

County Bridge #2 on Lockville Road in Exeter Township, which has been closed since 2012, will be removed, the commissioners decided. As a former Exeter Township supervisor, Wilbur had pushed for its rehabilitation, citing safety concerns for residents who have had longer waits since its closure for the arrival of emergency services, and the commissioners had previously voted for it to be repaired.

According to the agenda, the Exeter Township supervisors have rejected the offer, as the township would be responsible for making road repairs to the approaches and referred to the project as “a glorified shortcut.” Because of his previous involvement and strong objection, Wilbur recused himself from the vote.

“I don’t think we have much of a choice if the township does not want to fix the road,” commissioner Tom Henry said before he made a motion for the county to “close, vacate, and abandon” the bridge. It was agreed that the county would still be responsible for tearing it down, and commissioner Ernie King cast the deciding vote to approve the motion.

The fate of County Bridge #4 on Brides Drive in Falls Township was also discussed at the advice of an engineer. The wooden structure is assumed to have been built in the 1930 and, upon inspecting the bridge in person, the commissioners said they were surprised that it is supporting any traffic at all.

“It’s just not safe, so we’re going to close it temporarily,” Henry stated.

The commissioners announced the hiring of new EMA and Human Relations directors. Ralph Schwartz, who has been serving as deputy EMA director in Susquehanna County, has accepted the director position at the County EMA office formerly held by Gene Dziak. John Alunni, acting director of Children and Youth Services in Luzerne County will be coming to Wyoming County to replace Mike Donahue as Human Relations director. Both new hires, the commissioners noted, came to them highly recommended and they are happy to have them on board.

Matthew Schwartz has completed training as a telecommunicator and was promoted to the Telecommunicator 1 position. 911 dispatcher Brad Killian struck a deal with the county to take a $3 per hour reduction in pay after electing to no longer be involved with training employees. The commissioners also reluctantly accepted the resignation of Ben Hall from the 911 Center.

The commissioners unanimously approved plans by the Tunkhannock Daughters of the American Revolution (DAR), represented at the meeting by Nancy Walter and Mary Macarchick (below), to install a granite monument on the courthouse lawn. A letter of consent was signed by all parties. 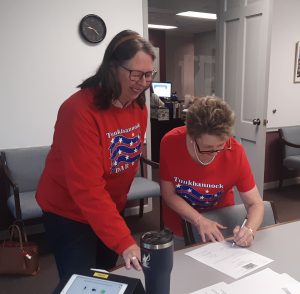 The commissioners received a complaint about the spreading of bio solids (treated human waste) on local farm fields. Commissioner Wilbur said that he looked into the laws on the practice, which have been in place for about 30 years. While he conceded that the fertilizer is especially pungent, it can be spread no closer than 300 feet to a home or 100 feet from a waterway as long as it has been treated for e-coli. Should anyone suspect someone of ignoring these requirements, Wilbur suggested that they file a complain with the DEP office in Wilkes-Barre.

Over the course of five meetings with the new owners of Tioga Terrace, residents and government agencies, the commissioners feel confident that they have bought some time for those faced with unaffordable rent increases. Many of them are likely eligible for CEO rental assistance, which could cover the excess rent for up to a year.

Several employees at Tioga Terrace are receiving training to help tenants through the application process. Henry suggested that 12 new senior housing units at Bridge View, for which ground was recently broken, might be available within a year.

2022-05-24
Previous Post: Plenty to See and Do at NEPA Bluegrass Festival
Next Post: Kids’ Trout Derby Has all the Hallmarks of a True Family Event