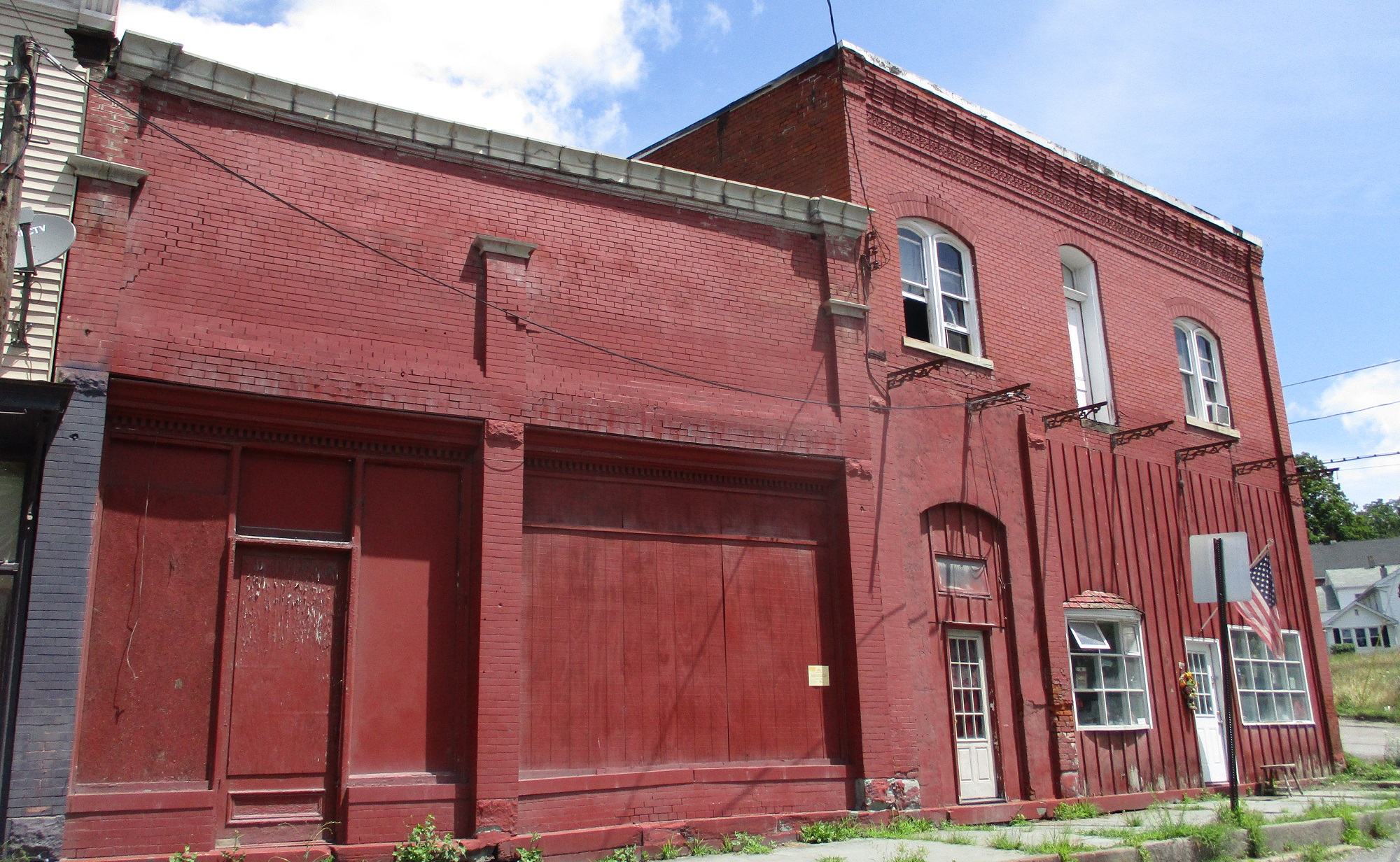 Long considered an eyesore and a haven for drug users, this building on Canal Street in Meshoppen is now void of residents, thanks to the response of a number of officials in the wake of Meshoppen’s recent water and sewer shutoffs.

Though not all the information was correct in the first extensive post about several Meshoppen residents who were left in “unlivable” conditions during last week’s heatwave, it was brought to the attention of enough people who were in a position to get to the truth and do something about it. An elderly gentleman with visual impairment is now in the company of his family in Florida. Two elderly women are currently in the care of friends and family until they can find more permanent residence.

The issues stemmed from the shutoffs of water and sewer service to more than a dozen properties in Meshoppen borough, the owners of which were six months or more behind in payments. Borough council has been mulling the shutoffs for years while delinquencies have mounted to more than $90,000.

A borough council member who assumes most of the municipality’s maintenance duties was asked by council on numerous occasions to cut service to properties, but he was reticent to do so because the inhabitants were renters whose monthly payments to landlord Steve Colley were supposed to include water and sewer service. Four properties are under the partnership name Griffith Colley, and two owners are listed as Jags Colley.

At their June meeting, council members agreed that the situation had gone too far, especially when the borough received a bill from their solicitor for $2,500 associated with Colley’s declaration of bankruptcy. Liens had already been placed on the seven properties he owns in the borough, including one that was part of the flood buyout.

The last chance for Colley was a sizable sum he promised to the borough subsequent to an insurance settlement he was expecting for a property that he had owned in the Montrose area that burned down. As of July 1, the borough had yet to receive any money from Colley, and council demanded action. Despite the hardships that Colley’s renters might incur, it would be less of a burden in the summer, they decided, than during cold winter months.

By all accounts, though Colley’s weren’t the only properties affected, the tenants and homeowners who lost water and sewer service found other places to live – except for an elderly man and two older women living separately.

Wyoming County Special Needs program coordinator Lori Bennett caught wind of the social media posts and went directly to the Wyoming County Courthouse to enlist the aid of the commissioners. They, in turn, contacted Wyoming County EMA director Gene Dziak, who was on vacation but assisted via phone conferencing, and Meshoppen Police officers John Krieg and Sierra Crane. The three most vulnerable people were tracked down on Thursday and their situations assessed.

As aforementioned, family members of the man who had been described on Facebook as blind were contacted, and he has reportedly been removed to Florida. One of two women living in a building on Canal Street had family locally who have taken her in, and the other is staying with friends. A few “squaters” found by police in the building were told to leave.

“I think that it shed light on some other things going on there that might now be addressed,” commissioner Tom Henry said when the issue was brought up at the regular meeting of the Wyoming County Commissioners on July 23. Henry related that he later followed up on the matter with Chief Krieg.

Located on the first floor of the Canal Street building is a flea market, which had no running water long before the shutoffs. It is operated by a couple who lives in a house on Sterling Street that also lost water and sewer service last week. That couple told the borough secretary that they were getting money from a county agency to put toward the $3,200 owed for water and sewer on a Colley house next to the post office and would be moving into it. The agency denied them the funding however, because the utilities are in Colley’s name.

Colley is better known in the Tunkhannock area as an art instructor. It was incorrectly reported on Facebook that he owns the art studio at the Dietrich Theater in which he conducts classes. Some on social media suggested staging a protest at the studio but were discouraged from doing so out of respect for the Wyoming County Cultural Center.

On Tuesday, Bennett thanked the commissioners, Dziak, and Meshoppen police for their quick response to the situation. “Everybody worked as a team,” she stated. “Within two hours, we had what could have been a disaster under control.”