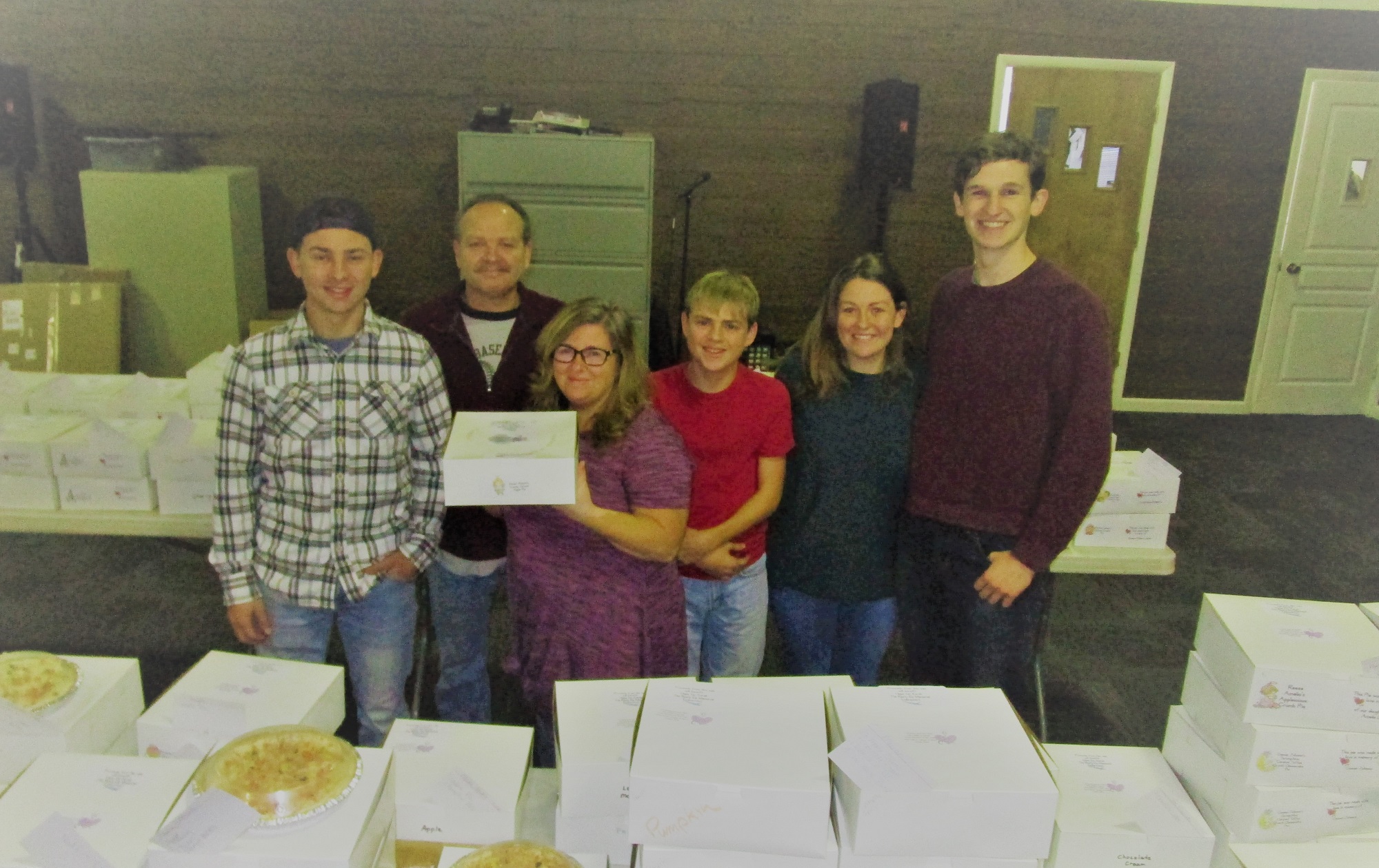 The crew selling pies at the Bridgewater Baptist Church last week included (from left) Keith, Guy, Jen, Jonah, and Olivia Ely and Nate Easley. Proceeds from the annual pie sale benefits a variety of charities that help children in need and their families.

Foot traffic was steady on Thanksgiving Eve at the Bridgewater Baptist Church in Montrose were members of the Ely family were busy sending homemade pies out the doors. Hundreds of approximately 300 pies of assorted flavors were stacked on tables, many of them having be ordered in advance. The Elys’ pie baking endeavors have evolved over the past two decades, and their patrons have become more engaged.

Alayna Ely was born to Guy and Jen Ely on Nov. 21, 1995. In addition to having a cleft pallet, Alayna was simply not thriving as a newborn should be. The Elys took their baby girl home on Thanksgiving day, but she only lived for two weeks. To the best of their understanding, Alayna suffered from DiGeorge Syndrome. She was not producing T-cells.

About 14 years ago, to bring new meaning to their Thanksgiving holiday and to honor Alayna, Jen began baking and selling pies for charities. She admits that her baking skills were limited at first, but a sister-in-law stepped up and taught her the basics.

“I started outside on Public Ave with 20 pies,” Jen recalls of the early often chilly days of her crusade.

Now, she gets help from numerous family members and friends, with pies baked this year at both the Baptist and United Methodist churches and at the Rosemont Inn. Flavors included apple crumb, banana cream, pecan, cherry, pumpkin and many others. There were also pumpkin rolls available for purchase.

Initially, the Ely’s dedicated many of the proceeds to Smile Train, a nonprofit organization that helps families cover the costs of corrective surgery for children with cleft lips and palates in 87 countries. This led to the Ely’s looking overseas to assist orphanages in impoverished countries.

A trip to Ethiopia 14 years ago further broadened their horizons and their mission. There the Ely’s encountered the village of Korah, home to people afflicted with leprosy and built on a garbage dump. They’ve since become supporters of Hope For Korah, which provides education and medical and spiritual care for the people living there. Jen’s cousin, Jake Boner, continues his mission work in Korah.

When Guy’s brother, Rusty Ely, passed away, the couple looked for a way to honor Rusty’s legacy as a well-known contractor, sports coach, and youth mentor.

“He knew that college wasn’t for everyone and was an encouragement to those who were more hands-on and were ready to enter the workforce,” Jen related. That’s when a portion of the pie sale proceeds were steered to the Rusty Ely Memorial Fun for the Susquehanna County Career & Technology Center.

Jen also reaches out to other parents who have lost a child. Jen takes spacial pride in the “remembrance pies,” working with the family for flavor suggestions. The families make a donation to the Elys and receive a couple of the special pies. The remainder are sold.

After getting some much-needed relaxation on Thanksgiving Day, Jen reported that brisk sales of the pies netted a similar amount of funds as previous years even though the bakers had scaled back production a bit this year.