In: Susquehanna County Government
With: 0 Comments

Freshly returned from the fall conference of the County Commissioners Association of Pennsylvania (CCAP) held in Hershey, commissioner Alan Hall detailed a number of significant modifications to the state’s Election Code presented at the conference that will be enacted prior to the spring primary election. Act 77 includes changes in absentee and mail-in voting, shortens the time prior to election for registration or party affiliation changes, and provides funds for counties that were mandated to update their voting machines to produce a paper receipt.

Hall noted that the voter registration deadline has been reduced to 15 days from 30. Appeals of “denial of voter registration” must now be received by the elections office no less than 15 days prior to an election and the receipt both are no longer based on postmarks.

Though there doesn’t seem to be much difference between them, the state will now allow “mail-in” voting with no excuses needed. The ballots can be downloaded and printed from the Department of State’s website or picked up at the courthouse. If mailed, the ballots must be received by the Elections Office 15 days prior to the election, but they may also be hand-delivered on election day up to 8 pm, which, Hall noted, effectively makes the courthouse a new precinct.

When asked how he felt mail-in voting might effect voter participation, Hall said, “We don’t know what’s going to happen. Its going to take about five years for things to balance out.” The state election board predicts that as many as 15 percent of voters might take advantage of mail-in voting, but voter registration could also increase by as much as 15 percent.

One of biggest and simplest new election rules is that voters can no longer vote a “straight ticket,” meaning that they must check each box individually, even if they still intend to vote for only candidates of a single party.

Susquehanna County began investing in new voting machines two years ago, placing at least one at each precinct. Now that the state has agreed to cover up to 60 percent of the cost of new machines purchased by Dec. 31, Hall related that the commissioners will discuss and make a final decision about purchasing more machines over the next month.

The biggest plus of the newer machines, Hall explained, is that they will prevent “over voting.” More than 600 ballots were deemed ineligible during the November municipal elections in Susquehanna County because participants cast votes for three commissioner candidates, instead of the two to which they were limited. The newer machines are also better at reading ballots that have been folded or somewhat crumpled, and the ballots do not have a tear-off stub, which has also caused some tallying issues.

Commissioner MaryAnn Warren, who did not retain her seat for another term in the fall election, was presented a Community Service Award by Barbara Durkin, director of the Lackawanna/Susquehanna Office of Drug & Alcohol programs.

“She has been instrumental in so many things,” Durkin said of Warren. “Behavioral health, substance use, suicide intervention, and mental health.” Durkin noted that Warren was instrumental in the opening of the Trehab Community Resources Center in Montrose, that “is really going well and used by so many residents.” 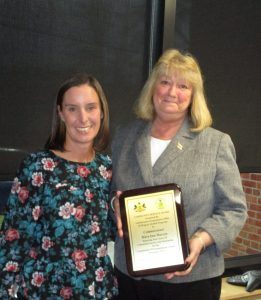 Warren was noticeably moved by the honor bestowed on her by Durkin, who also remarked that, while Warren will be missed as a commissioner, her participation at the drug & alcohol office will always be welcomed.

Commissioner Hall subsequently held up an award presented to him at the CCAP event. The Pennsylvania County Risk Pool (PCORP), which supplies general liability, auto insurance, property and crime coverage to county governments, singled out Susquehanna County for excellence in safety performance and initiatives. “This is an award for all of the county employees and the work that they do,” Hall stated.

Douglas Wood Jr. was named the new public director of the Susquehanna County Conservation District in the wake of the resignation of William Burke from the same post. Wood will fill the seat through Dec. 31, 2020. Robert Fearnley of Montrose was approved as a new farmer director for the Conservation District Board of Directors, and Jim Kessler of Hallstead was approved to retain his seat as a farmer director.

The commissioners also reappointed Nancy Harvatine, Robert Housel, and Loren Salsman to the board of the County Planning Commission.

The commissioners upgraded a contract for the county’s phone system to include more service calls and warranties. With an increase in cost from $425 to $678 per month, Hall related, “If something goes bad, they replace it.”

Susquehanna County has also entered an agreement with Capital Area Communications for 911 Nokia Radio Links at the recommendation of Public Services and 911 director Bruce Butler. The purchase price is $187,781, plus an annual maintenance contract at $12,144.

“This is something we’ve never had and takes from the 19th to the 21st century,” said Hall. Previously, the county did not have a dedicated, licensed frequency for 911 communication, and virtually anyone else could tap into it and use it.