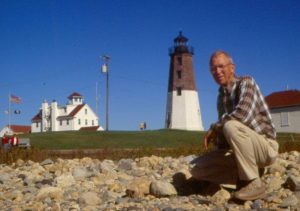 Don James (above) became a fan of lighthouses while he was serving in the Navy. He and his wife Gail (top, with Don at the Nubble Lighthouse, Cape Neddick, Maine) were avid photographers, and lighthouses were a common subject of their photos.

The Don James Lighthouse of Service Award Selection Committee recently announced that the recipient of the 2021 award is Glenn E. “Ace” Shupp of Tunkhannock. 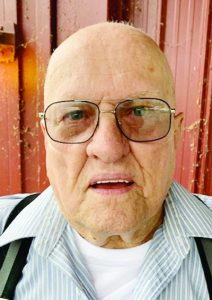 The committee believes that Mr. Shupp exemplifies the ideals, attributes and overall qualities that constitute the framework of this distinguished award which, each year, recognizes individuals who have demonstrated noteworthy and dedicated service to their country, community, faith and family.

The award will be presented as part of this year’s Memorial Day Services at the Rought-Hall American Legion Post 510 in Black Walnut on Monday, May 31 at 11 am.

Glenn, the son of the late Josiah and Blanche (Alshouse) Shupp, was born in Wilkes-Barre, but, except for the time he spent in the service of our country, he has lived virtually all his adult life in Tunkhannock. He is a graduate of Tunkhannock High School, Class of 1949. He subsequently enlisted in the United States Army and saw wartime military service with Heavy Weapons and Motor Pool Divisions in the Republic of Korea, from 1952-1954, during that protracted and difficult campaign.

Upon separating from the Army and returning to Wyoming County, he established a trucking company and later, in partnership with his brother, founded a construction company. Then, following a serious work accident that left him permanently disabled, he turned his energies toward service to his community, by which he more than made his mark, setting himself apart based on the scope, impact and longevity of the outstanding successes he has been able to achieve.

Glenn’s manifest strong family and religious values are firmly based on the faith instilled in him by his parents. All three of his three children (Deborah Turner of Colorado Springs, CO—22 years, U.S. Air Force; Mark Shupp of Factoryville—four years, U.S. Army;, and Greg Shupp of Alford, Maine—30 years, U.S. Navy) have answered the call to military service. He has been steadfast in his attention to and support of the needs of his siblings. In addition, Glenn has been a life-long member of the Osterhout Bible Church, where he continues his dedicated service as a trustee.

Mr. Shupp, in the unanimous opinion of the selection committee, is richly deserving of the Don James Lighthouse of Service Award, which was established in 2009 by the Rought-Hall American Legion Post 510 to honor the memory and legacy of Don James by recognizing individuals who, like Mr. James, have provided exemplary service to and love of country, community, faith and family. 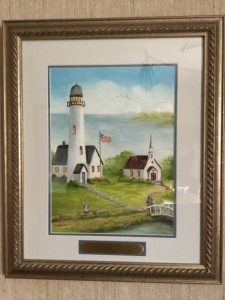 Artist Carol Angela Brown has graciously created a painting (above), which captures the spirit and essence of the Don James Lighthouse of Service Award, and will be presented to Mr. Shupp at Post 510’s Memorial Day Service. 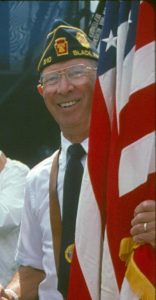 Don James (above) served in the U.S. Navy in the 1950s and faithfully participated with local veterans in honoring his country and deceased comrades. His community service included his role as volunteer lay chaplain at Tyler Memorial Hospital, participating in events like Relay For Life and providing countless programs of patriotic and faith-based music. His faith was deeply rooted in the Meshoppen United Methodist Church where he served as lay leader for many years. 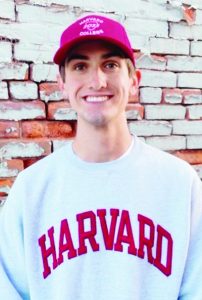 John “Jack” Chilson, 18, of Tunkhannock has been chosen as a recipient of the Don James Young Citizen Award. This award is based on his outstanding service in four categories: Community, Family, Faith and Country.

Jack (above) is the son of Terry and Becky Chilson and has two younger brothers, Ben, 16, and Luke, 11. Jack, a senior at Tunkhannock Area School District, is ranked #1 of 174 students. He has been the class president for all four years of high school and also served as president of the Future Business Leaders of America (FBLA).

Inother activities, Jack has demonstrated the same hard work ethic. As quarterback for the Tunkhannock Area football team, he was Junior Varsity captain (2017), Varsity Captain (2018-2020) and his career passing yards were second highest in school history.

Basketball was another sport in which he excelled. Being 6’5” tall and very athletic were both factors in him becoming a conference All Star in 2019-2020 and receiving the Offensive Player of the Year award in 2019. He also received a Varsity letter in Track and Field competition where he was a District qualifier in both javelin and the 300-meter hurdles.

In his “spare time,” Jack is deeply involved in community service. He has led many campaigns that benefit needy families. Two programs that provide Christmas gifts to underprivileged children are Community Toy Box and Adopt-a-Family. As a member of the football team, he launched a campaign for pediatric cancer research (St. Jude Children’s Research Hospital) and, as president of FBLA, he led fundraising events to support the American Heart Association and the Leukemia and Lymphoma Society.

Despite Jack’s busy schedule, he occasionally finds relaxation with his family when they travel to their cabin in Quebec and enjoys boating and fishing. During the winter months, the family also enjoys cross country skiing and snowmobiling.

Jack has been accepted by both MIT and Harvard and has decided to attend Harvard. He has expressed an interest in pursuing a career in Government or Law.

It is obvious that Jack is goal oriented and focused on all he does. His success can be attributed to his drive, determination and solid character. As Jack, himself, said, “I want to leave an impact in everything I do.” He definitely has demonstrated that in all areas of his life so far. Jack is certainly well qualified to receive the Don James Young Citizen Award. 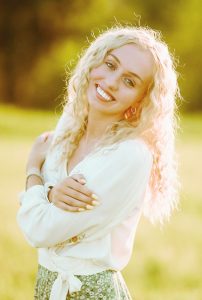 Loghan Hirkey, 18, of Tunkhannock has been chosen as a 2021 recipient of the Don James Young Citizen’s Award. This award is based on her outstanding service in four categories: Community, Faith, Family and Country. She is the daughter of Fred and Leslie and has an older brother, Lloyd, 28. She is a senior in Tunkhannock Area School District where she has attained academic excellence each year. She has been on the honor roll for four years and a member of the National Honor Society for two years. Loghan (above) is the chief editor of the school newspaper and will be attending Villanova University where she will pursue a career in journalism. Loghan is very active in sports and community projects. Her favorite sports are lacrosse and field hockey and, as captain of both teams, she has received a Varsity letter in each of those sports, plus marching band.

In addition to academics, Loghan keeps busy in community activities. She has been a Girl Scout for 10 years and has achieved the ranks of Daisy, Brownie, Junior and Cadette. Her commitment to hard work has resulted in her having the highest Girl Scout cookie sales each year. Other activities include 4-H participation, promotion of the dairy industry as Dairy Princess in 2019, working in the Soup Kitchen and donating food and spending time with animals at Griffin’s Pond Animal Shelter. In addition, Loghan is involved in Adopt-a-Family, an organization that supplies Christmas presents to families in need. For 17 years, she has found relaxation in being a member of Stage Door, a dance studio in Tunkhannock.

Loghan is an active member of Nativity BVM in Tunkhannock. She has been a Vacation Bible School counselor for two years, a counselor at Camp Brulé and has been singing in the BVM Youth Choir for 11 years.

Looking at all her academic, community, and other activities, it is obvious Loghan has a commitment to hard work, perseverance and is concerned for individuals and community. These qualities make her a great candidate for the Don James Young Citizen’s Award.

The lighthouse, serving for thousands of years a beacon of hope for mariners, is a fitting icon to symbolize these community leaders.

Don James’ wife, Gail, credits Bill Eberhardt for establishing the Lighthouse Award in Don’s name. “He approached me and asked if I would approve,” she explained, noting that she has never served on the committee but attends the event each year in Don’s honor. Gail related that Don took a liking to lighthouses while he was serving in the U.S. Navy.

After the couple was married, they started traveling the East coast and Great Lakes to photograph lighthouses. Photo graphing lighthouses was “always on the agenda when we traveled, except to Arizona!” Don and Gail also performed regularly at their church and other venues, incorporating their lighthouse photos into their music programs. “One of Don’s favorite gospel songs was The Lighthouse,” said Gail. “When he sang that one, we projected a lot of lighthouses during his singing. Consequently, Bill had been to many of our programs, and he decided on the name for the award.”