In: Collaborations
With: 0 Comments 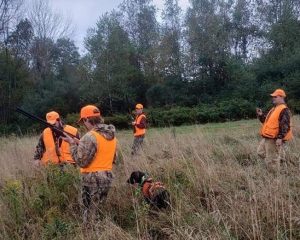 Ricky Davis (top, center) and Clay and Hunter Clay Gregory of Tunkhannock display the birds they shot with help from Ricky’s dogs at the recent North Branch Trout Association youth pheasant hunt in Lovelton. Mentored hunts pairing youths with trained hunting dogs have increased in frequency due to COVID restrictions on other activities.

Volunteerism has always been a strong suit among the employees at Williams in Tunkhannock. Their passions often become causes further supported by the company. People like Ricky Davis, who participates in youth pheasant hunts as a dog handler, lead Williams to more opportunities to foster partnerships in the community that complement the employees’ efforts. Other employees have been directly involved with Hunts For Healing, a program for veterans, conducted at Ringneck Ridge near Laceyville.

Ricky joined the company three and a half years ago as a technician. He and wife Brenda live in Rushville, Susquehanna County, and have four girls, two boys and three dogs, including a rottweiler named Cleopatra.

As an avid outdoorsman who was taught to hunt by his father, Ricky has taken his own enjoyment of working with hunting dogs to a new level by helping to introduce them to youths newer to the sport. He had worked with German short-hair pointers in years past but has been working with a pair of Springer spaniels for the past three years. Rushville Rocket and Brownie Chocolate Moose are also cherished family members who Ricky’s daughter Sophia helped to name.

Rocket and Brownie, as they are better known, are talented flushing dogs who follow Ricky’s lead in the field, while a mentor is paired with each youth. Group sizes are capped at six as a safety measure. In addition to a very detailed presentation at the beginning of each event, the young hunters practice by shooting sporting clays prior to the actual hunt.

The safety lessons, Ricky explained, never stop. Knowing when to shoot, when not to shoot, and how high the birds need to be are crucial elements that help keep the dogs safe too. “The dogs can jump quite high,” said Ricky.

Some rural school districts like Wyalusing offer clay shooting as an activity which, Ricky related, has produced some very good marksmen and women, but many are still never introduced to hunting. “The youths need to learn these things,” he said of the sport and the art of working with dogs. Ricky is usually one of eight to 10 handlers contributing their time and talents at any one event.

“It takes a lot of volunteers to conduct an event like that,” said John Piccotti, CEO of Ringneck Ridge, the local home of Hunts For Heeling and a growing number of youth programs. In addition to the handlers and mentors, there are hunting guides, clay bird instructors, and a crew to put on lunch. Also acknowledging that many of the first-time participants don’t come from hunting families, John stated, “I have to have people who have worked with dogs and birds and know what’s going on.”

John invited Ricky to bring his dogs to Ringneck Ridge for the annual Van James Memorial Youth Hunt two Decembers ago, and Ricky was impressed by the turnout and the skills the youths displayed. He is looking forward to this year’s event, slated for Sunday, Dec. 13.

More recently, he participated in the annual fall shoot conducted by the North Branch Trout Association (NBTA), in which approximately two dozen youths took part. According to NBTA past president Harry Shaw, there were a variety of dogs involved in the event, including pointers, flushers and retrievers, each of which exhibits a slightly different style.

“I think it makes the perfect event. There’s nothing better than watching dogs in the field,” Shaw remarked. The handlers introduce the youths to their dogs and explain how they will react. “Those dog handlers make it all happen. They’re telling the kids when they can shoot and how to get ready.”

The Association also conducts a large Youth Trout Derby every April that had to be canceled this year due to the pandemic. Shaw said the pheasant hunt was literally a breath of fresh air in a year that has been anything but normal.

Ricky’s family also participates in the annual trout derby, where Sophia landed the biggest fish in 2019. Williams has been a strong supporter of the fishing event, and also made a financial contribution to the Association this year for the recent pheasant shoot. “We buy some pheasants, and the Game Commission gives us some pheasants,” Ricky explained. “Williams is great about giving back to the community.”

This past July, John and Pete Hatton of Hunts For Healing presented a plaque to Williams for the company’s ongoing support of its programming.

“As the Veteran’s Business Readiness Group lead here and a veteran myself, I can’t express how proud I am of Williams’ local support and involvement in veteran’s programs such as Hunts For Healing and Patriots Cove,” stated Al Latwinski of Williams. “It’s also a great feeling to know that Williams employees have always been able to give of their time and resources to the communities they are involved in.”

Ricky also appreciates the attention his employer pays to the initiatives that matter most to the workers and the communities in which they volunteer. He looks forward to the December youth hunt at Ringneck Ridge as one of few activities that can be conducted under CDC guidelines, since the sport naturally lends itself to safe-distancing. He’d also like to work with the military veterans served by the Hunts For Healing program.

Between events, Rocky and Brownie are keeping Ricky busy. “The dogs give me that look that they want to go out. It’s bred into them,” he said. “They’re like our kids too. We love them.” 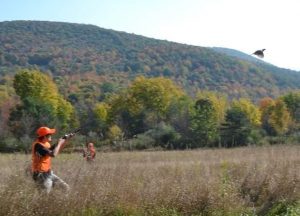