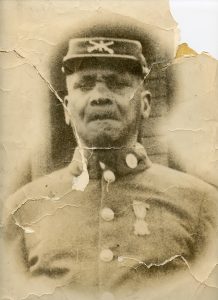 As the United States celebrates the nation’s newest federal holiday, Juneteenth, it is important to remember the thousands of soldiers who fought for all people to be free. During the Civil War, Ralph Payne (1844-1900) a free African American man from Towanda, Bradford County, and a grandfather of Harriette Payne Dennis of the Historic Dennis Farm, Susquehanna County, served in the 41st Regiment of the US Colored Troops (USCT), as first a corporal and then as a sergeant.

Payne trained at Camp William Penn, in Chelten Hills, Cheltenham County, PA the first camp specifically designed to train African American soldiers. He then participated in the Appomattox Campaign in “pursuit of Lee, April 3-9, 1865,” under General Ulysses S. Grant and was among more than two thousand African American soldiers who were present when the confederates surrendered to the Union Army.

After the war, Ralph Payne traveled with the 41st Regiment to Texas, arriving at Brazos Santiago on June 3, 1865 and was among the African American Union soldiers who helped spread the news to formerly enslaved African American in Texas that they were now free.

Sgt. Ralph Payne is interred in Bradford County. Many of his descendants live in the greater Philadelphia area. One of his great-great-great grandsons is a student at Monmouth University, in New Jersey.

The purpose of The Dennis Farm Charitable Land Trust, a non-profit 501(c)(3), is to continue to develop the more than 220-year-old, 153-acre farm in Susquehanna County into an educational and cultural site for scholars, researchers, educators, and others interested in this extraordinary history. To learn more about The Dennis Farm, visit www.dennisfarm.org.