Wyoming County Springs Back to Life as Pandemic Wanes

The Wyoming County Commissioners worked through an ambitious agenda on Tuesday morning that included announcements of grants and other funding for numerous projects, enhancing security, progress on the Roadside Rest park, and the availability of Narcan for anybody who wants it.

“We are trying to make it as easy as possible to get Narcan into your hands,” commissioner chair Rick Wilbur stated.

The availability of the naloxone, which reverses the effects of a heroin overdose, was initially limited to medical practitioners, first-responders and to the public by prescription only. Now, all three commissioners will be gathering physical mailing addresses via their personal county email addresses to distribute kits made available to them via a grant.

“There have been 22 overdoses in the county so far this year,” commissioner Tom Henry reported. “Ten were reversed by Narcan, and two were fatal. It has not gone away. It is not getting better.” Primarily, he explained, the kits are being offered to family whose loved ones who are at risk of an overdose.

The commissioners’ email addresses are as follows: rwilbur, thenry, and eking, all ending with the suffix @wycopa.org. The only information necessary to protect confidentiality is a mailing address. Names are not requested, Wilbur maintained, “and we will not be tracking these addresses. They will be destroyed. If you are not worried about confidentiality, you can walk in and we’ll hand it to you.” 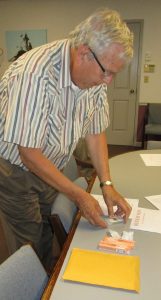 Commissioner Ernie King retrieved a kit and displayed its contents on the board table. Each contains two doses of naloxone, which is applied into the nasal cavity, in case the first dose doesn’t completely work. “You’re better to err on the side of giving the second dose,” Wilbur remarked.

“You cannot harm someone with a second dose,” Henry concurred, adding that watching a YouTube video of the varying reactions of those to whom the naloxone has been administered is a good way to prepare for possible outcomes.

With Sheriff Bob Roberts in attendance, the commissioners discussed several security initiatives that are underway simultaneously to address both physical protection of county buildings and employees and cyber security.

Roberts is working with Paul Mendofik, a retired state police lieutenant and current security consultant, to further efforts at the county level that began this spring with an evacuation drill. The next step will be a “shot recognition” exercise that will be held after hours in the courthouse with emergency personnel, the commissioners, and other employees who volunteer their participation. 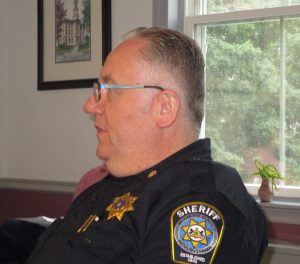 “We will be going through the courthouse and deploying blank rounds so employees can hear what gunfire would sound like,” Roberts (above) explained. The drill will be recorded, analyzed and used as a training video. “Ultimately, we’re going to come back by the end of the summer with a final report for the commissioners to see where we need to improve.”

Meanwhile, the commissioners approved three different purchase orders totaling $29,303 to replace antiquated backup hardware and software for the county’s entire computer system. The first of about a half dozen steps is to install a system that backs up data daily to a secure cloud setting. Citing significant losses of data due to computer hacking in other Pennsylvania counties, Wilbur said, “If we do get attacked, we will only have to back up one day.”

Commissioner King noted that Homeland Security will be send personnel to Wyoming County in the fall to conduct a stress test on the computer system. The scheduled operations will take about a week and will result in recommendations for more security enhancements and a followup to ensure that they are working.

The commissioners reported that the contract to lease Roadside Rest park to Eaton Township through the remainder of 2021 for one dollar has been approved by the Eaton Township Supervisors. The county recently paid about $4,000 for the removal of dead ash trees in the park and will continue to carry liability insurance for visitors. Volunteer workers will be covered by an insurance policy held by Eaton Township.

Though the details have been finalized, Wilbur related with a laugh that the deal isn’t legal until the county receives its dollar.

Area residents are invited to attend a meeting of the Roadside Rest Steering Committee, which will be held at the park along Rt. 29 at 7 pm on Tuesday, June 29.

The commissioners received four applications for History Alive Grants, utilizing leftover funds from a five-year-old bond issue. Recipients of $5,000 grants included the Dietrich Theater, Wyoming County Historical Society, and Laceyville’s Oldest House. The Nicholson Heritage Association will receive $20,000, which will be used for sewer and water hookup to the train station there as years of renovations are wrapped up.

The window for submitting Hospitality Grant applications closed on May 14, and amounts up to $22,500 were awarded by the commissioners to 14 county establishments.

COVID Restrictions to be Lifted at Courthouse, but Not Jail

The commissioners voted unanimously to end requirements for mask wearing and temperature checks at the courthouse as of Monday, June 28. Any visitors and employees who wish to continue to wear masks or have their temperatures checked upon entering the building are welcome to do so.

While visitation by family members to prisoners at the Wyoming County Correctional Facility was recently reinstated, the resumption of other services for inmates remains stalled because they have not been receptive to getting the COVID vaccine. An offer to put $25 on the commissary account of each prisoner who agrees to be vaccinated has been largely ignored.

“Even with the incentive program, we don’t have enough people,” said warden Ken Repsher, noting that commitments from just five inmates would allow for the procurement of 10 doses of the vaccine.

“That’s disheartening because we’d like to get back in there and do things in the jail,” commissioner Henry remarked. Prior to the pandemic-related shutdowns, Henry continued, he used to visit the prison at least once a month to talk with inmates.

Though staff at the correctional facility are fully inoculated against COVID, the reluctance of prisoners to be vaccinated is depriving the general population of drug and alcohol counseling, religious services, and other visits that were once routine.

In the meantime, Repsher has been trying to secure more worship services online. Currently, only Christian services have been broadcast, but he is hopeful that the delayed introduction of e-tablets to inmates will allow those of other faiths to find compatible services.