Couple’s Plan to Bike Around the World Steers Them to U.S. 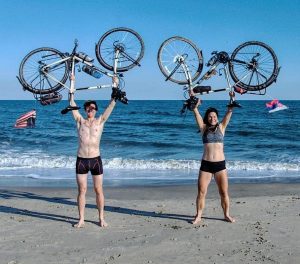 Part of the path that Tim and Eliska Fetzko (top) took across the United States from California to Delaware included famous Route 66. Above, they celebrate the conclusion of their journey at Rehobeth Beach.

When Tim Fetzko was zipping around Tunkhannock on his bicycle with childhood friends, he wasn’t thinking about biking around the world with his wife. He also wasn’t likely thinking that his wife would be from Slovakia. But when they met in 2011 at a hotel in Glacier National Park where they were both working, the sense of adventure they shared was immediately obvious. In addition to their wedding vows in 2014, the couple committed to a lifestyle unfettered by expectations.

“Eliska was one of the coffee shop baristas, and I was working in the kitchen as a cook,” Tim recalls of their meeting. “The money wasn’t great, but the experience of getting to live in such a beautiful part of the world and making friends from so many different states, countries, and walks of life was well worth it in the end. I think we both learned in our time there that life could be whatever we wanted it to be and that we didn’t have to be set into whatever molds we had been raised to consider as correct or normal.”

Tim’s family moved to Tunkhannock from New Jersey when he was two, and he graduated from Tunkhannock Area High School in 2006. His parents, Donna and Mark, still live right in town. Tim attended Shippensburg University, where he received a Bachelors of Science in Geoenvironmental Studies with a minor in German Studies.

Eliska has both a Masters and Bachelors degrees in Ethnology and Ethnomusicology from the University of Konstantin in Nitra, Slovakia. She is from the village of Vrbovce in the Myjava region, which borders neighboring Czech Republic. Her parents, Anna and Jan Alias, still live in Vrbovce.

“Since I am from Europe, I speak many languages,” Eliska noted. Her first job was in Germany. “I was 17 and quickly realized that, without knowing a lots of languages, I wouldn’t be able to move around the world, which was always my dream.” She speaks five languages fluently and two or three badly, she jokes. “But I can keep simple conversation and ask for things we need.”

Tim learned to speak Slovak when the couple went to live with Eliska’s parents. “I always appreciated Tim’s interest in my culture, language and family,” said Eliska. “Not everyone is willing to go as far as learning a language which is spoken only by six million people around the world.”

Tim also learned a bit of Turkish, Spanish and German as the couple’s interest in travel grew. They took quite a few trips together, traveling by car around the U.S. on a number of occasions and backpacking in South America, Europe, Russia, Kyrgyzstan, Mongolia, Nepal, and Nicaragua.

“We noticed that we were spending about half of our budget on transportation costs and wasting way too much time sitting in planes, trains, cars and buses,” Eliska remarked. “It finally occurred to us that biking could help save money and reduce our carbon footprint while also opening up the opportunity to see the road less traveled.” Tim had also had both of his hips replaced between 2015 and ’17 and found that biking had much less impact on his joints compared to lugging around a 50-pound bag.

The couple struck out from Slovakia in the summer of 2019, heading east across central Europe toward Turkey. “When we began to get into bike travel, we were riding specialized Sirrus models, but ended up buying sturdier Genesis Tour de Fer 20 touring bikes when we began heading east from Istanbul,” Tim noted. “They have steel frames and relatively simple components, to make upkeep and repairs less of a headache when we find ourselves off the beaten path.”

Passage through Europe was fairly simple at first, Tim and Eliska agreed. Many borders were opened up and decommissioned through the Schengen Treaty of 1985. Even as they reached the Balkan peninsula, they were able to cross borders in Greece and Turkey with relative ease. “It’s kind of a blast when you’ve got a bike. Typically we were allowed to skip the line, and sometimes even take pictures with the patrols,” said Tim.

But things changed quickly as the coronavirus pandemic reached Europe. “By the time we made it to central Turkey in March 2020, we were having to obtain and carry permits to travel from city to city,” Eliska related. The couple returned to Slovakia then struck out again towards Spain and Africa in August but were halted again when pandemic shutdowns returned.

They decided on a spur of the moment to go to the United States, bike across the country, spend Christmas with Tim’s family in Tunkhannock and work afterwards. They always knew they wanted to bike across America, but they didn’t think it was going to be this early in their lives.

The couple flew to and acclimated themselves to Los Angeles for a few days before starting a two-month trek to the east that would eventually land them in Lewes, DE. “Since our original plan was to cross the Alps from Slovakia and then bike through the Sahara, we had packed a wide variety of clothing and equipment to cover all types of weather and climate,” Tim explained. “When we flew to LA, we just boxed everything up and put it all back together at the airport then continued on as if nothing had happened.”

Though they had driven around the U.S., they found an entirely new perspective cycling towards the Rocky Mountains and beyond, watching the landscape gradually evolve as they proceeded east. They were pleasantly surprised that the people they met along the way regarded them simply as travelers, rather than tourists.

“In everyday life, I never really noticed how friendly and curious Americans really are,” Tim exclaimed. “This tended to be the case in cities, in the countryside, and even on reservations in the middle of the desert. Despite the underlying political tensions of an election year and the whole pandemic situation, we always felt really welcome wherever we parked.”

The couple found many helpful people along the way. Some offered them a couch to sleep on, a chance to take a hot shower, or to do their laundry. People ordered them breakfast or bought them pizza or sandwiches at a gas station.

“I was really impressed by the beauty and kindness of people,” Eliska offered. “They are much more involved and want to know your story. Some gave us food or invited us to pitch our tent in their backyards.” Otherwise, they snacked on dried fruit or made extra food for supper that would serve as lunch the next day.

They crossed the Mississippi River from Missouri’s boot-heel to Hickman, KY, by ferry. The captain let them ride up top in the cockpit and sent a pizza delivery right to their next camping site. “Crossing the Mississippi was a landmark moment for me, because it cemented the feeling that anything is really possible,” Eliska related. “That was one of only a few days that the landscape was flat.”

They arrived in Delaware on Dec. 12 and dipped their toes in the chilly waters of the Atlantic Ocean at Rehobeth Beach before spending the night with friends. Tim’s father picked them up the next day and drove to Tunkhannock, where they spent the holidays. They intend to return to Lewes this summer to work at a restaurant near the beach.

“At this time, because of the pandemic, we have opted to stay closer to family and are spending the winter in southern Vermont, working at a private ski resort just a few hours away from northeast Pennsylvania,” Tim explained. Spending the summer at the beach in Delaware will be a bit different from living in the Rockies or Slovakia, he admits. “But we are excited to try something new and to get to know the east coast a little better. We’d be cheating ourselves if we didn’t try it.” 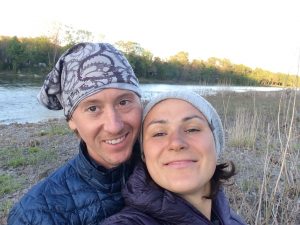 “Its very interesting to return to the place you grew up in after being gone for so long, and I have a so many great memories of Wyoming County,” said Tim, noting that they will visit Tunkhannock briefly at the end of the ski season. “I still haven’t done any biking in the area as an adult but, when we do have the opportunity to bike through the Endless Mountains, I look forward to not needing a map.”