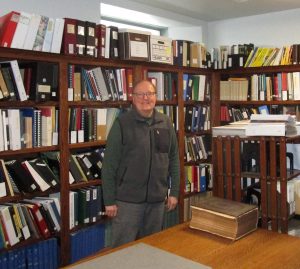 The United States will turn 250 years old in 2026, and organizations at the state and federal level have already started making plans for what will likely be one of the biggest national celebrations in years. The Pennsylvania Commission for the U.S. Semiquincentennial County Advisory Committee reached out to elected officials in all 67 counties to find representatives who can tell the stories of their communities.

Farley will tell you that he was “born into history.” His Irish immigrant ancestry, including a trek in 1836 by John and Ellen Shea Sullivan and James and Mary Austin Donovan to the Towanda area walking with an ox cart, was documented in a 1943 book titled “Twelve Generations of Farleys” before Henry was born.

“We grew up with history. It was just part of who we were,” Farley said of families like his to which there is always another chapter to their stories if one just keeps digging. Farley started turning over more stones, so to speak, after he acquired items that had belonged to his mother and her parents, including a trunk from Ireland. Information was scarce, he recalled, and he started writing to other museums to find the names of his grandparents’ cousins.

“My mission in life was that I had to tell the story,” he stated. It soon led to his involvement in helping other people discover their Irish roots. Most of the Irish coming to Bradford County in the early to mid 1800s were here to help build the North Branch Canal North Branch Extension. Next, Farley started working on the histories of local Catholic churches that sprouted in numerous Irish immigrant settlements, like Farley’s ancestors on Pond Hill near Lake Wesauking. “Generally, people went to where their people already were,” he explained.

He became a member of the Bradford County Historical Society (BCHS) in 1980 and has served on the board for the past 31 years. He has been board president for 19 years. He had begun volunteering at the Bradford County Museum as early as 1970, his first big undertaking being the identification and resleeving of 13,500 glass plate negatives that had been stored in the tower of the Citizens Bank Building in Towanda.

The remarkable images were captured at Ott & Hay Studio, which was located in the building between 1890 and 1915. “This was the county seat. People dressed up to do business and they would get their pictures taken when they were in town,” Farley explained. (Farley himself is a Towanda native who has lived in Sayre for the past 40 years and currently serves the borough as mayor.)

Bank employee Richard Hall carried the slides to the BCHS in lots of 300 to 400 over the course of two years. “They needed hands, so that’s one of the projects I got involved with in the beginning.” Farley, BCHS staff members and other volunteers cataloged the slides before computers were prominent.

According to the BCHS website, volunteer Paul Newell created the digital record of the collection that is accessible today. Orders for reprints, which provide some income for the museum, have come from as far away as Ireland, ironically from a man looking for more information on his grandfather. He was also named James Donovan, though no relation to Farley’s ancestors. Farley helped him develop a genealogy of the ancestors who had come to America, including his grandfather’s siblings. 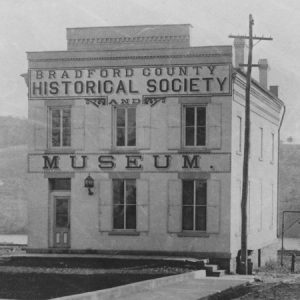 The BCHS is one of the oldest historical societies in the Commonwealth, and its first museum was in Courtroom 1 in the Bradford County Courthouse, where records were kept in bookcases 151 years ago. In 1901, the collection was moved to the courthouse annex (above), and the first museum was established. In 1974, the BCHS moved to 21 Main Street, a building owned by the county.

“When the museum was located on Main Street (below), it was a lot like a private club,” Farley suggested. “The same people would be there every Friday and Saturday night.” Farley was disconcerted. “Nobody knows we’re here,” he recalls thinking. “This is sad. We have no money. We have to do something to survive.” 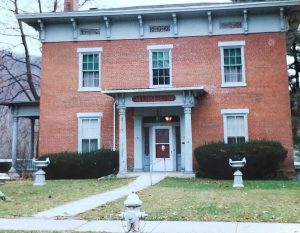 Farley reached out to the Chamber of Commerce and the Business Association and held a successful gala. As the youngest board member, Farley’s approach seemed a bit outlandish. One older member commented that Farley was “blowing the doors off the place.” But it worked. Increased patronage and donations followed.

In 1997, the BCHS was offered the Valley Railroad Collection. “They asked if we would accept it, or it was going up for auction,” he said. The board agreed to take the collection, which was transported to Main Street, only to reveal that there was not nearly enough room for it. “The museum looked like the TV show Hoarders,” Farley remarked.

After looking at the former Vern Furniture Store building, Society members visited the old Bradford County Prison on Pine Street. “The paint was festooning off the walls,” Farley recalled. “It was awful, but we knew we could make it work.” 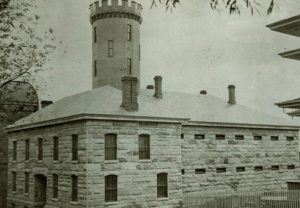 Then Bradford County commissioner Tina Pickett recalls that the Historical Society’ proposal to the newly elected board of commissioners sounded like a godsend, as the old jail was regularly a topic of conversation, and they didn’t want to spend any taxpayer money on it. “However, it occurred to me that historical societies do not have the ready funds for the significant renovation that this building would need,” Pickett related. “But Henry said, ‘We have a way.’”

The BCHS secured a grant from the PA Historical and Museum Commission to bring in John Herbst, then president of the Conner Prairie Museum in Indiana, to Towanda to provide guidance to the board. “He taught us about fundraising and board structure and everything we needed to do to start a new museum,” said Farley. Early estimates for the renovation of the jail into a museum ranged from $150,000 to $200,000. “By the time we started getting blueprints and designs, we were looking at $2 million. But it’s all paid for. We don’t owe anything.”

“The Society did an incredible job of making this building valuable and treasured,” Pickett stated. “both for its history and for its very impressive newly found use of displaying our heritage.” 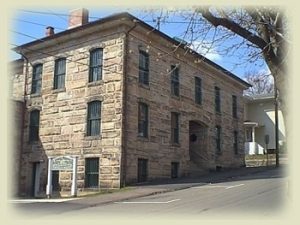 The research library opened in 1999, and the rest of the museum was made accessible to guests over the next two years. “Because we had started on Main Street letting people know that were alive, we had phenomenal support for the new museum,” Farley noted. An influx of new contributions came from individuals, elected officials and corporations.

Prior to the pandemic, the Bradford County Museum had become a popular destination for locals, former residents, school children, and bus tours from as far away as Canada. “Many people like to study a particular category when they come into the museum like religion, social clubs, industry, or local physicians,” Farley explained. Old dishes, farm implements, uniforms, and coal mining memorabilia from Barklay Mountain are popular attractions. “Everybody has their own take on it. This was professionally done, and people are absolutely dumbfounded when they see it.”

Though Farley, at 69, is the museum’s senior spokesman, he insists that the success that the BCHS has realized there would not be possible without dedicated board members, volunteers, community support and the work of museum library clerk Denise Golden and manager/curator Matt Carl.

“Matt was a blessing from heaven for us. He has a keen sense of how to put things together,” Farley said of Carl, who started as a board member. “A lot of the things that we used to be on the road for all the time, Matt has taken over for us.” They have worked on several books together and collaborate quarterly on a museum magazine titled The Settler that has been published for 59 years.

Carl and Farley recently recovered a 30-by-15-foot canvas mural depicting Bradford County in 1867 from the C&N Bank Building. It depicts a pivotal moment in history, showing the canal and the covered bridge with a side walkway for mules to pull the barges across the river. Museum staff will work with the students from the Northern Tier Career Center to get it into a frame so that it can be displayed soon in the Great Room as the former recreation yard (aka – the Bull Penn) is called since it was enclosed. “We also want to do a model railroad layout, because Railroads are part of who we are,” Henry related.

Farley insists that his work for the BCHS is far from complete. “We’re not done. There’s still stories to tell.” Plus, Farley admits, “I still have no idea of everything we have in this building. Every time I’m working on something, I find something that I didn’t know was here.”

With nobody on the current board younger than 60, Farley is worried about the long-term viability of the museum and historical societies in general. “I’m concerned about how all of these organizations are going to survive. There don’t seem to be any young people interested,” he stated. “I would love to see some sort of program to involve young people. Businesses used to encourage their employees to be involved, but they don’t anymore. I don’t think that people realize what a difference they can make.”

Due to COVID guidelines and restrictions, public access to the museum and the research library have been limited, but Farley is hopeful that groups of people will be able to return by summer. Interested readers can check in at www.bradfordhistory.com for updates and schedules. 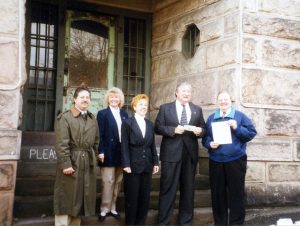 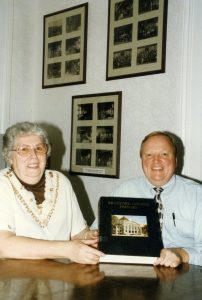 Doris Wilcox Hugo (left) and Henry Farley collaborated on the last Bradford County History book in 1995. The 830-page volume contains 1,366 submitted family stories. Henry would like to publish a new history book for the county. 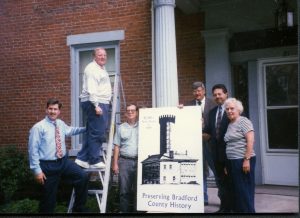 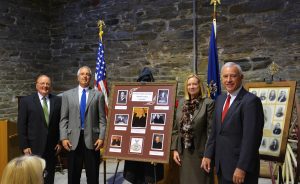 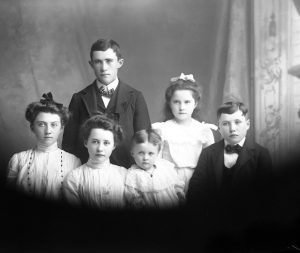 Henry Farley found some family treasures among the Ott & Hay slides, including this photo of his grandfather Edward Maloney (back, left) with the other children of John and Catherine McCarthy Maloney: Nell (back, right) and (front, from left) Johanna, Margaret, Catherine and John in 1900. 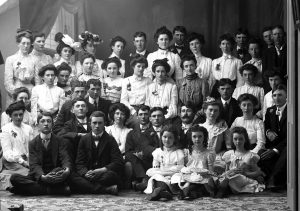 A number of Farley’s ancestors are seen in a family reunion photo taken at the wedding of Stephen Maloney and Katherine Sullivan in 1903.

2021-03-25
Previous Post: Couple’s Plan to Bike Around the World Steers Them to U.S.
Next Post: Car Show & Swap Meet Planned at Troy