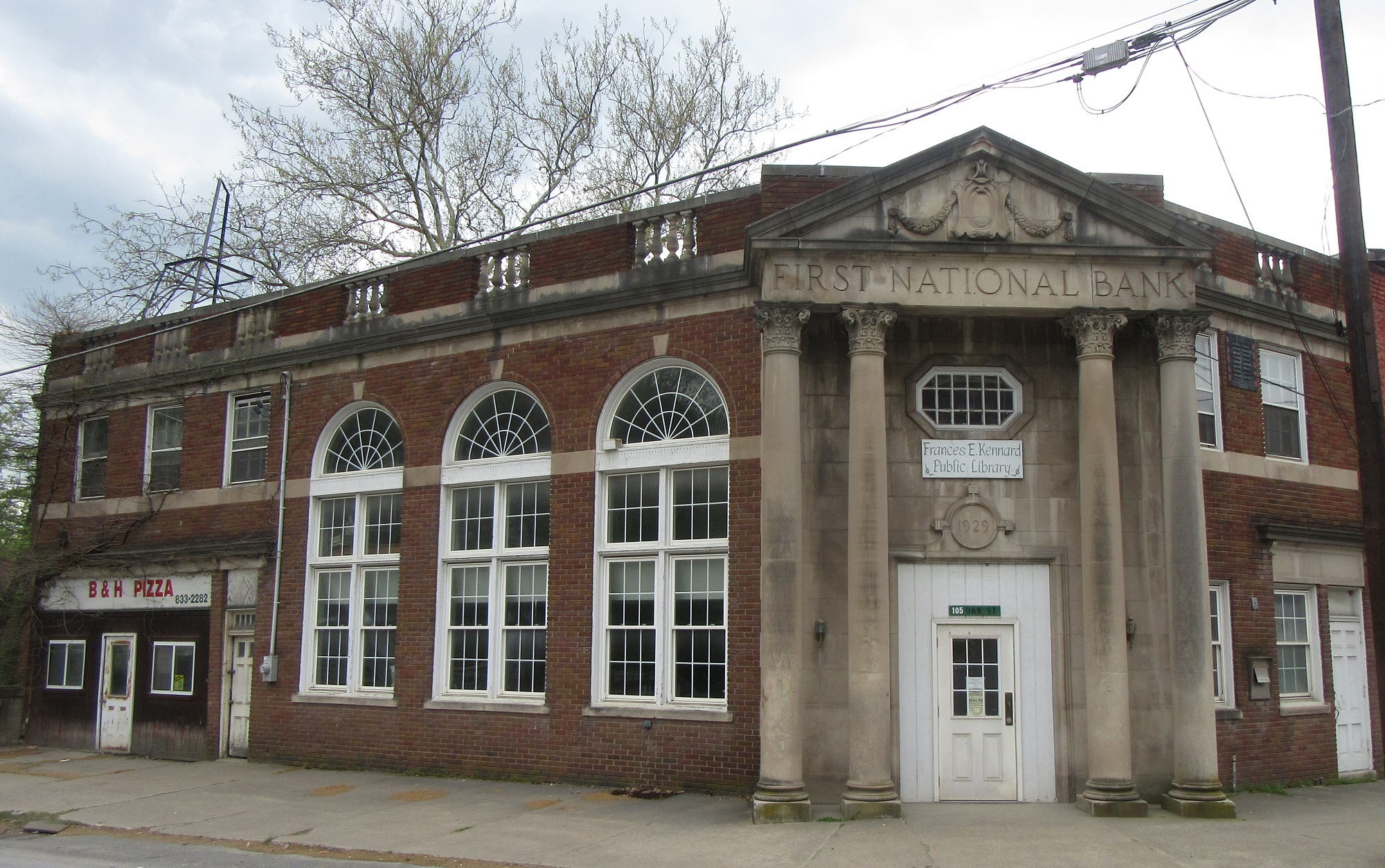 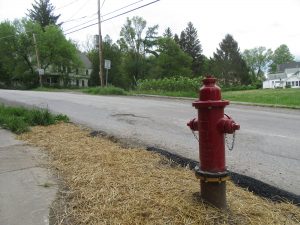 A new fire hydrant (above) is just the beginning of expected changes at one of Meshoppen’s busiest intersections. New plans have been submitted for a Dollar General store across Auburn Street that will include the demolition of the adjacent white house. Concurrently, closure of the Frances Kinnard Public Library at the corner of Canal and Bridge streets appears to be unavoidable, as use of the facility has dwindled to a handful of people per month.

At a time when many potential changes in the landscape of downtown Meshoppen are being proposed simultaneously, council members are wary to believe that anything is a ‘done deal’ these days until earth is move or dust flies.

Flood buyouts and demolition that have dragged on for years, as well as plans to take down the former pizza shop on Bridge Street have overlapped with rumors of a new Route 267 bridge over Meshoppen Creek and indications that a new Dollar General store might happen after all. The only news that seemed certain at Monday night’s meeting, but still could not be confirmed, was that of the imminent closure of the Frances Kinnard Public Library.

Council received a letter from Wyoming County Housing & Redevelopment Authority (H&RA) Section 8 coordinator Danielle Powell explaining that she was trying to wrap up some projects that (H&RA) grants administrator Lisa Hahn had started – namely the demolition of the building next to the bridge. Meshoppen borough secretary Phyllis Adams related that Powell started by requesting documents that Adams knew had already been submitted, including the agreement by council on the contractor that they preferred to do the job.

Council had approved a bid by KBA Engineering at their February meeting. KBA subsequently contacted the borough and asked to meet with a borough official to go through the building as soon as possible. Council member Mike Voorhees suggested that demolition of the building could pave the way for the replacement of the creek bridge, noting that, while no timeline has been proposed, the span is on a PennDOT list for replacement with a wider, open bridge.

Council received a letter from Labella Associates of Dunmore indicating that the company would be handling the demolition of homes on Church Street that were bought out by FEMA. Council chairman John Bunnell said that Wyoming County EMA director Gene Dziak had said that he would attend the meeting to provide an update, but Dziak was not in attendance. It was noted that five property owners on the original buyout list have yet to accept a deal.

Just when it appeared that the corporation that is planting Dollar General stores across the county was about to bypass Meshoppen due to an inability to obtain requested variances to erect a store at the intersection of Auburn and Welles streets, a copy of extensive new plans arrived in the borough offices showing a new proposed footprint. Apparently, plans to buy Ken Sutton’s house on Welles Street were scrapped in favor of buying the large white house on Auburn Street currently owned by Jeramie Canella.

Wyoming County planner Lynnelle Farber confirmed that the new application has been submitted to the planning office and that it will be reviewed at the Planning Commission’s meeting next week. If it is accepted, a 90-day review period will follow. Dollar General’s parent company has requested DEP’s water testing records for the property, which Bunnell questioned, considering that plans for the store indicate only 180 gallons of water usage per day.

Voorhees asked what the borough will be charging Dollar General for water and sewer hookups. Fellow council member Bruce Priestner noted that the Canella property already has active sewer and water service. Adams suggested that there should still be a hookup fee, nonetheless. Priestner retorted, “At least they (Dollar General) will pay their bill.”

On that note, the totals for delinquent water and sewer bills are down slightly to a total of $78,000. Adams related that Steve Colley, who has owed a considerable amount of money on several properties for quite some time, has promised to pay the borough after he gets a settlement check from a property of his in Montrose that burned down. Council member Cindy Cona pushed for more shutoffs and less leniency for excuses and promises that never pan out.

Council member Jack Vaow waited for the end of the meeting to break the news that the public library at the corner of Bridge and Canal streets is slated to close on June 1 due to a lack of use. “Nobody is going there. They only had four people last month,” Vaow remarked. Library officials asked Vaow if the borough would be interested in buying the building, but he assumed correctly that council did not want the building, even for free.

The closure cannot be confirmed, Vaow noted, until the auditor general agrees to it, at which time the sale of the building would be advertised for bids. In addition to funds that remain in the library’s account that might be earmarked for a scholarship, Vaow said that he’d like to see any profit from its sale go towards a new park on Church Street. Voorhees speculated that PennDOT might also buy the library property, take the old bank building down and widen the corner to allow for tractor trailers to make the turn onto Canal Street from the new bridge.

“It’s a shame,” Bunnell said the planned closing of the library and potential loss of another historic structure. “Borough Council used to meet in the second floor of that building.”

Council also discussed and passed a resolution to advertise for the sale of a 6,250 square foot lot on Main Street/Route 6, across from the funeral home, situated between the sites of the former hospital building and the red house owned by Steve Borrell. The property has to be appraised yet and the wording of the advertisement approved by the solicitor.
A new fire hydrant has been installed at the lower end of Auburn Street that replaces one damaged by a tractor trailer two months ago. The total cost of about $7,100 has been temporarily absorbed by the borough, necessitating a temporary draw on the municipality’s savings account to pay last month’s bills, which an insurance settlement should replace. Voorhees noted that the broken hydrant could have been fixed for a little as eighty dollars, which was the cost of the broken part, but somebody stole the hydrant, and a police report has been filed.

Clean-up Day in Meshoppen will take place on Saturday, June 15, and will be handled by River Valley Waste Management. Costs for certain large items will be advertised.

It was observed that parking for the May 6 meeting was a challenge due to a large crowd at the ballpark. Council members rejoiced at the activity in the park and discussed the possibility of securing a grant to erect fencing around the new playground equipment to protect users from foul balls. Council member Doris Pickett announced that the dedication of the old keystone from the bridge that once spanned Little Meshoppen Creek will be dedicated at the park on Thursday, May 23.