Canton FFA members (above, from left) Tyler Engel, Samantha Morgan, Oliver Kelley, and Camille McRoberts sport Spotted Lanternfly hats after their informative presentation on how to capture the pests. From there, they followed fellow FFA members to the New Holland Arena for the annual Pennsylvania State FFA Association Mid-Winter Convention. Both activities were part of the eight-day 2022 PA Farm Show.

The Spotted Lanternfly is considered one of the biggest threats in decades to Pennsylvania’s agricultural industry. In 2014, the invasive insect native to Asia was discovered in Berks County and has steadily moved north and west to spread across the Commonwealth. By 2020, the Lanternfly had made it as far north as Luzerne County. In March 2021, Lackawanna and Wayne counties were added to the list. 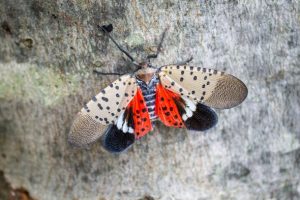 Four Canton FFA members took the stage in the Giant Expo Hall of the Pennsylvania Farm Show Complex on Jan. 10 for a presentation titled “The Trap to Change the Future.” Tyler Engel, Oliver Kelley, Samantha Morgan and Camille McRoberts took turns describing the damage caused by the Spotted Lanternfly before demonstrating how to construct a trap to prevent the insect from reaching the leaves of the tree. Fellow FFA member Lucas Drever recorded their presentation.

The youths pointed out that the Spotted Lanternfly has never met a plant that it doesn’t like. Its favorite, however, is called the Tree-of-Heaven – itself an invasive species. From there, it has moved on to other plants, including fruit trees. As it feeds, it excretes a sugary substance called “honeydew” that encourages the growth of black sooty mold.

“Who wants to eat something covered with black mold?” Camille asked the audience rhetorically. That’s why, she explained, the bug is such a threat to agriculture. Pesticides have largely proven ineffective and eradication of the Tree-of-Heaven too costly. 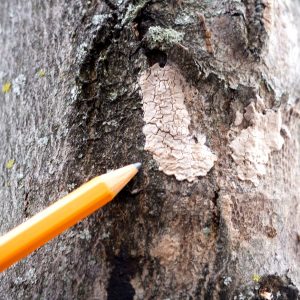 The one thing that everyone can do, the youths explained, is to be vigilant for the presence of the Lanternfly, the arrival of which in Bradford County is all but inevitable. Once the pest has been identified in the area, the best remedy is to physically remove it. If the opportunity to scrape their egg masses off of tree trunks (above) and destroy them is missed, the next stage of prevention (during the next stage of the Lanternfly’s life) is to stop it in its tracks.

“Their natural instincts tell them to keep climbing,” Samantha related.

Using commonly available items like a sheet of wire mesh, a water jug, staples, string and duct tape, the foursome showed how to construct what they called a “circle trap.” Tyler pointed to some variations of the trap placed along the front of the stage that the students had made since they started their experimentation in September. But the circle trap, they insisted produced the best results.

If the diameter of the tree is small enough, one trap will do. But, they explained, if the diameter is as large or larger than the log they used as an example, two or three such traps would be needed. The idea, they noted, is to surround the entire trunk so that the bugs eventually find their way into a jug.

“We use their own natural instinct against them,” said Oliver. “They don’t like to climb down.”

“Once they get to the bottle,” Samantha added. “They can’t get out.”

The four presenters were among 12 FFA students who made the trip to the Pennsylvania Farm Show that day for the State FFA Association Mid-Winter Convention. They were joined by another eight members of Canton High School’s FCCLA and Family & Consumer Science classes.