Canton students Lyle Vermilya (above, left) and Tyler Engel with a confection rendition of Lyle’s barn.

Two Canton teachers took 18 students to the Pennsylvania Farm Show several times over the past week, with yet another trip planned to dismantle a display. In various combinations, they checked in on gingerbread houses they’d submitted and a landscape display they’d built. Others demonstrated how to make traps to prevent spotted lanternflies from damaging plants, and all took part in a massive state-wide FFA convention.

On Monday, a combination of students involved in FFA, FCCLA (Family Career & Community Leaders of America) and Family & Consumer Science classes taught by Maureen Martz ascended on the Farm Show Complex in Harrisburg. They had created a variety of gingerbread houses, several of which garnered ribbons.

“Some are individual projects, some were collaborations, and others have common styles and themes because they worked in the same space and borrowed ideas from each other. 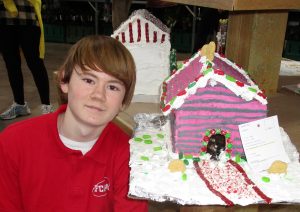 Ninth-grader Julian Ziegler (above) produced a rendering of Snoopy’s famous doghouse. “My poppy likes the Peanuts comics, and so do I,” he said of his inspiration for the piece. 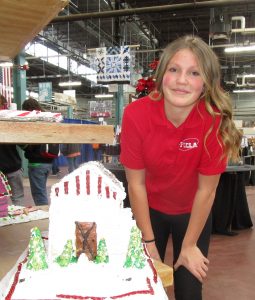 Eighth-grader Alexis McRoberts (above) created a chicken coop, complete with a yard full of marshmallow peeps. She was working next to freshmen Lyle Vermilya and Tyler Engel, which explained why some of her chickens had flown the coop and landed on their barn. It was the first time either of the boys had built a gingerbread house, which was inspired by the barn at Lyle’s farm in which cows and pigs are kept.

Another gingerbread builder was Savannah Bastian-Brown, who took third place for her entry (below). 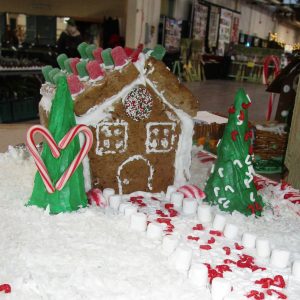 While they were at the Farm Show, Martz encouraged the youths to check out other competitions for youths for new ideas. “Our plan in the future is to look at more of the open baking contests like making Cakes, breads, cookies, and muffins,” she stated.

Reflecting on the trip after returning to Canton, Martz said, “ The FCCLA/Family and Consumer Science students learned a lot about what events they could possibly compete in. I think they also realized that less is better than more, as in the less you add to your design the more opportunity you have to place.” The students were impressed as well by the broad scope of the Farm Show.