Camping and Bluegrass Festival Go Hand-in-Hand, Even for Locals 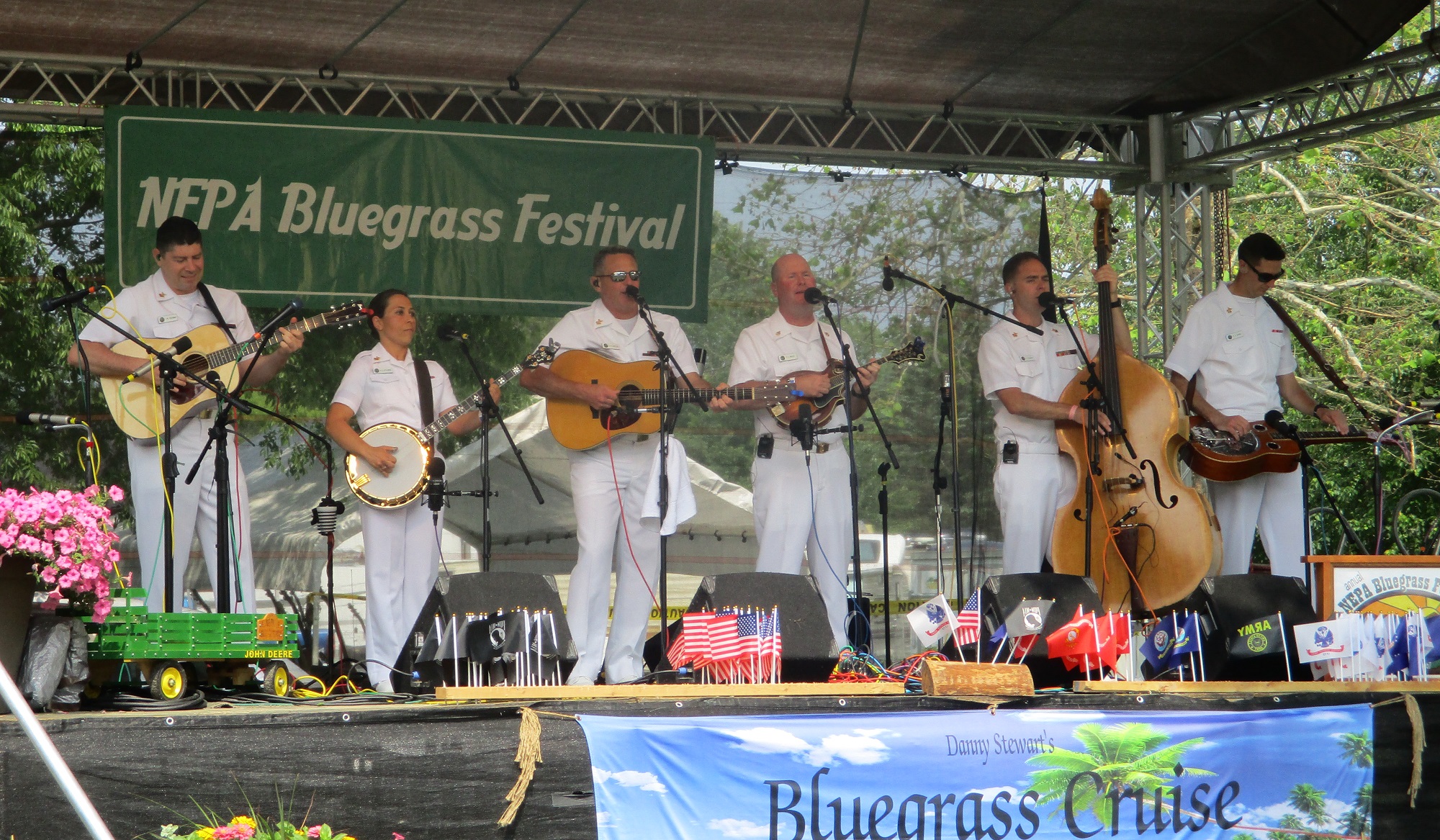 I took an entire 48 hours off to attend the NEPA Bluegrass Festival this year, and it was worth every moment. I heard incredible music like the US Navy Band Country Current (top,) took in impromptu pickin’ jams and relaxed with old friends and new along Tunkhannock Creek in Lazy Brook Park. 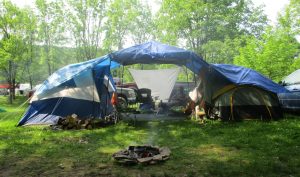 Photos and Synopsis by Rick Hiduk

Yet another successful NEPA Bluegrass Festival has come and gone, and I am ever more convinced that setting up camp at Lazy Brook Park is the way to go. As of this writing, we were packing up our tent and tarps just three mornings ago, but the festival already seems like weeks ago and the venue another world. I don’t believe that I would feel that way about it had I not taken two full days away from home (and my computer) to immerse myself in the NEPA Bluegrass culture.

Only those of us who have attended the event more than twice (eight times now for me) fully understand the sense of family that one can experience by getting together with dozens, if not hundreds, of people just once per year. I was asked by a new participant if I attend other such festivals and the truth is, other than the Cornstock Folk Festival three of four times, I really do not.

Though I cherish my summer weekends and always try to set some time aside for both completing a spate of chores around the house and getting away for a ride somewhere away from home, it’s not easy for me to truly take two or three days off because I wear multiple hats. This is the first year in the past five, in fact, that I did not book a DJ gig during at the peak of wedding season. I turned five couples down for Saturday, and I make no apologies.

Firstly, it’s the caliber of the festival itself that makes it worthwhile. In addition to drawing world-class recording artists and top regional acts to relatively humble Tunkhannock Township, Danny and Christa Stewart have perfected a finally-tuned machine that includes a small army of volunteers who serve in every capacity from greeters and shuttle drivers to those collecting trash in the morning or delivering ice in the afternoon.

Secondly, Lazy Brook Park is truly one of Wyoming County’s best kept secrets. It is the epitome of what a municipal park should be and lends itself perfectly to the festival with its paved roads, flowering trees, and flat camping sites. Tunkhannock Creek, aka the “lazy brook,” was running a little high and swift this year, but a number of people did brave the chilly waters the one day that it was a bit lower. And that beautiful red bridge, plucked from sure demolition up stream and restored with preservation funds, has become an iconic part of the festival.

Over time, you begin to realize that campers distinguish themselves in little villages around the park. A large contingent from Wyalusing was set up next to the venerable Philly Billies. I do some local promotion for the Stewarts and shared emcee duties on Thursday night with backstage manager Sandi Marola for an Early Arrivals & Vendor get together, so I’ve earned a spot in what we call “Volunteerland.” Opposite the main stage at the western end of the park is “Vendorville” to us. We refer to the field full of extra large campers and motor homes as “RV City.” We don’t know what they call it.

Nonetheless, the newer attendees who set up on the outskirts of these clusters or manage to sneak a tent into one of the nooks and crannies soon realize that they have stumbled onto something special. In between visits to the two stages, we mosey from site to and sit a spell with our neighbors, all while hearing the strains of banjo and mandolin music floating on the air. The atmosphere is so relaxing that returning to reality seems a crime.

Most people bring some food to add to impromptu pot luck meals, but we also patronize the wide variety of food vendors to balance out our menus. Fish tacos were a big hit this year, though I admit to never trying one. It did enjoy a great cheese steak, some awesome crab soup and breakfast-to-order two mornings in a row. Except for the very inexpensive breakfast, the prices may seem steep at first, but you’ll quickly learn that almost every food item you purchase is enough for two people (even a ‘small’ dish of ice cream.)

The benefits of camping for local people cannot be stressed enough. We quickly learned that coming and going from the park – about 15 minutes for us – can be both a curse and a major convenience. If you stay for the late shows, especially at the progressive stage along the creek, you will not want to drive. Crawling into your tent after enjoying adult beverages is a much better option.

During the day, after a few hours of watching shows and perhaps being a bit sluggish from attending “pickin’ parties” into the wee hours of the morning, nothing beats a power nap in your tent or camper. Likewise, you can make a quick trip home if you need to feed the pets, take care of business, or even enjoy a hot shower. Stop at the grocery or beverage center and head right back to the park for more music.

For those not well acquainted with the NEPA Bluegrass Festival, tickets generally go on sale in January, and substantial discounts are offered for “early bird” buyers of weekend passes, which include free primitive camping. There are a limited number of campsites available with electricity on a first-come, first-served basis.

The festival, which is always held on the weekend after Memorial Day has its own Facebook page and website, www.nepabluegrass.com. Mark your calendars now. Join me next year. And bring your tent! 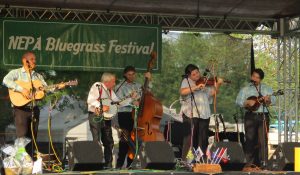 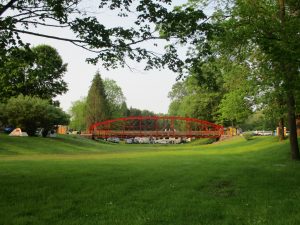 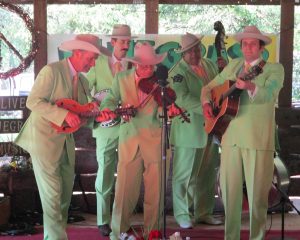 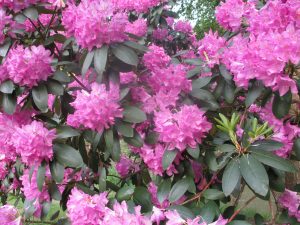 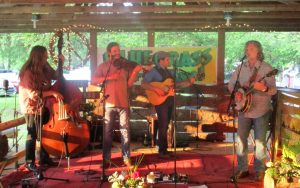 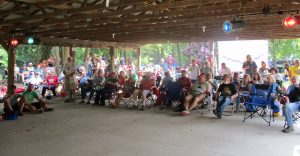 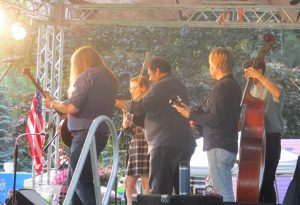 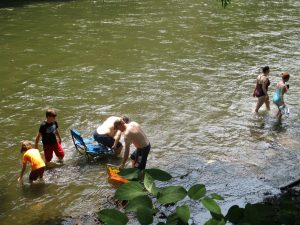 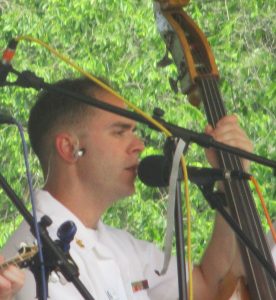 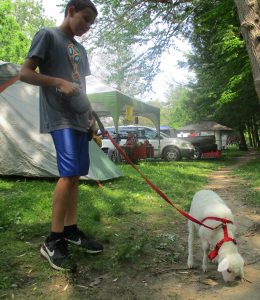 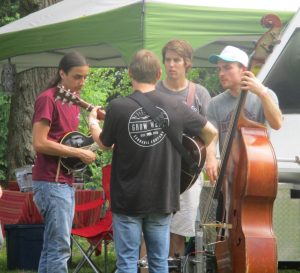 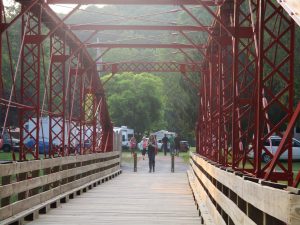 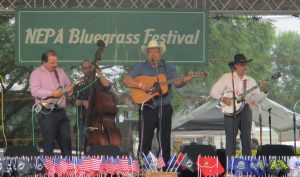 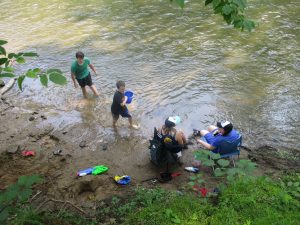 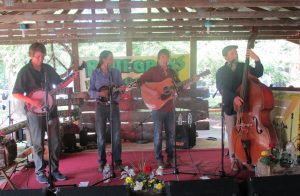 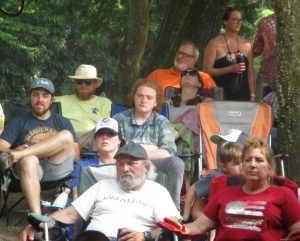