In: Family Destinations
With: 0 Comments 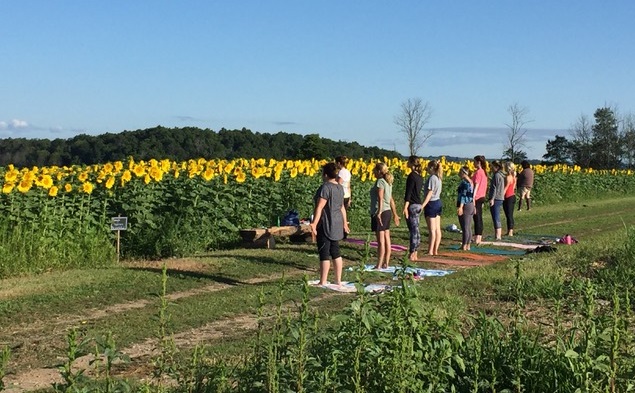 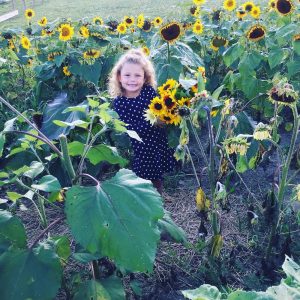 Everything’s Zen when you’re facing a field of sunflowers and open sky at the Brown Hill Farms. Sunflowers rising over their heads must create a sense of the surreal for the thousands of children who visit every year.

When Michele Brown pondered what she might rather be doing after years of running a floral shop and then a bridal boutique in Tunkhannock, she needed to look no farther than the farm on which she lives with her husband, Scott Brown, and son Jacob in Lemon Township, Wyoming County. Scott and Michele are 1988 graduates of Tunkhannock and Elk Lake high schools, respectively.

Brown Hill Farms has been in Scott’s family since 1868, and there are currently three active generations of Browns working the land and opening up much of their property to the public. Dairy products were the focus up to about 20 years ago, when Scott began diversifying the farm’s portfolio. He was one of the first farmers in the area to plant soybeans.

Taking into account Michele’s love of flowers and her experience as the eight-year owner of Reese Florist, the Browns were intrigued by a new business model referred to as agritourism. Also spelled agrotourism, the relatively new concept varies from country to country and state to state. In Europe, agritourism often includes a farm stay, but Americans seem largely content to visit an operating farm for a day, pick their own vegetables or fruit, feed animals, or navigate a maze of corn stalks or hay bales.

“We started talking about it 10 years ago,” Michele recalled. “We did one season to see if people wanted to come to the farm.”

As the Browns continued to experiment with new crops, they also opened a pumpkin patch and corn maze in 2017 and the sunflower fields that were 15 years in the making in 2018. Overhead shots of their corn maze rendition of the Tunkhannock Viaduct captured by a drone last year went viral and brought droves of new people to Brown Hill Farm, who also enjoyed feeding goats and purchasing fresh produce from an on-site farm stand.

“I had no idea that people would pay us to walk through these fields. It’s amazing,” Michele remarked. “I would have retired from the bridal shop years ago, had I known.”

Sunflowers, corn and pumpkins are traditional crops of the summer-to-fall harvest season. The goats and cows are accessible year round, but Michele said, “People were asking for something new, and we were looking for something to balance cash flow.”

Like most farmers today, the Browns are challenged by erratic weather and fluctuating prices for supplies and that which they produce. “I don’t like to be one of those farmers that complains,” Michele stated, so she and Scott went looking for new ideas.

They visited a tulip farm in New England and returned home with visions of bands of spring colors on their own rolling hills. A chance encounter with a tulip bulb sales rep who just happened to be in the area led to the purchase of more than a quarter million bulbs in 60 varieties that were planted last fall. The flower rep also provided guidance on how and where to plant the bulbs to produce 24 specialty gardens and 600-foot rows of tulips.

Peak season for the tulip patches will run from mid April into May. The Browns and three full-time employees also grow 20 acres of sweet corn, two acres of potatoes and abundant squash, cucumbers, tomatoes, melons and peppers that are sold on site and at roadside farm stands at Route 29 and Meshoppen Creek Road in Lemon Township, Route 29 south in Eaton Township, and on Route 92 in East Lemon. 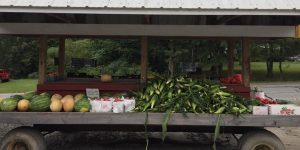 The Browns added hemp to their repertoire about three years ago. The fiber- and CBD-rich cannabis cousin of marijuana does not produce the THC that pot fans are seeking. It is not part of the wagon and walking tour routes, but it still attracts attention. Michele chuckles when she imagines the disappointment experienced by those who have stolen a plant or two if they smoke it with high expectations.

In addition to the public, the Browns look forward to hosting visits from school children in the spring. “It can quite often be their only experience on a farm,” Michele remarked, even when they are from areas that were once actively farmed.

Youths tend to get the biggest kick out of the animals, which include heritage breeds of sheep, goats and cows. They climb and tumble over giant hay bales and love the opportunity to ride a farm wagon.

Adults tend to appreciate the more tranquil elements of farm life like walks through the fields, yoga classes, and taking in sunsets that Michele maintains are “simply breathtaking” from the high plateau on which the center of the farm is situated.

Much of what is grown in the fields is eventually harvested and processed for feed by Ross Feeds in Hop Bottom. In the meantime, the Browns keep an eye on the future of agritourism as they network with other farm owners across the country to share ideas. They built a new barn last year that gives them room for measured growth, and they are considering a larger concession stand.

The respect and gratitude that visitors display is what Scott and Michele find most motivating. “They appreciate the effort that we put into making it special,” Michele offered. “They thank us for opening our farm to them.” 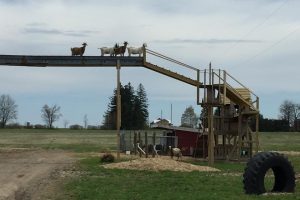 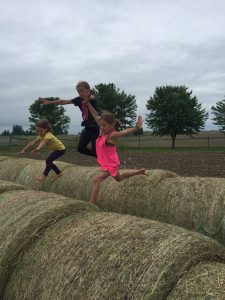 Children can find the “toy” in anything, and climbing hay bails or leaping from one to another is an activity that even parents must envy. 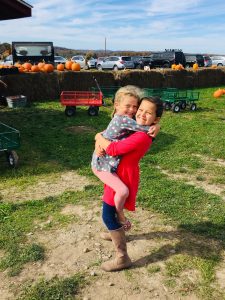 Fall is a special time at Brown Hill Farms, and these girls look ready for some pumpkin picking, a wagon ride or maybe tackling the hay bale maze. 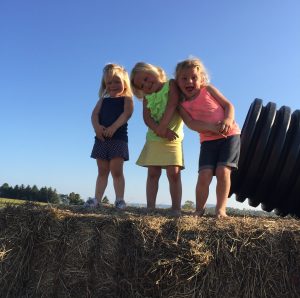 You never know what might pop out of a giant drain pipe in the hay bale maze.